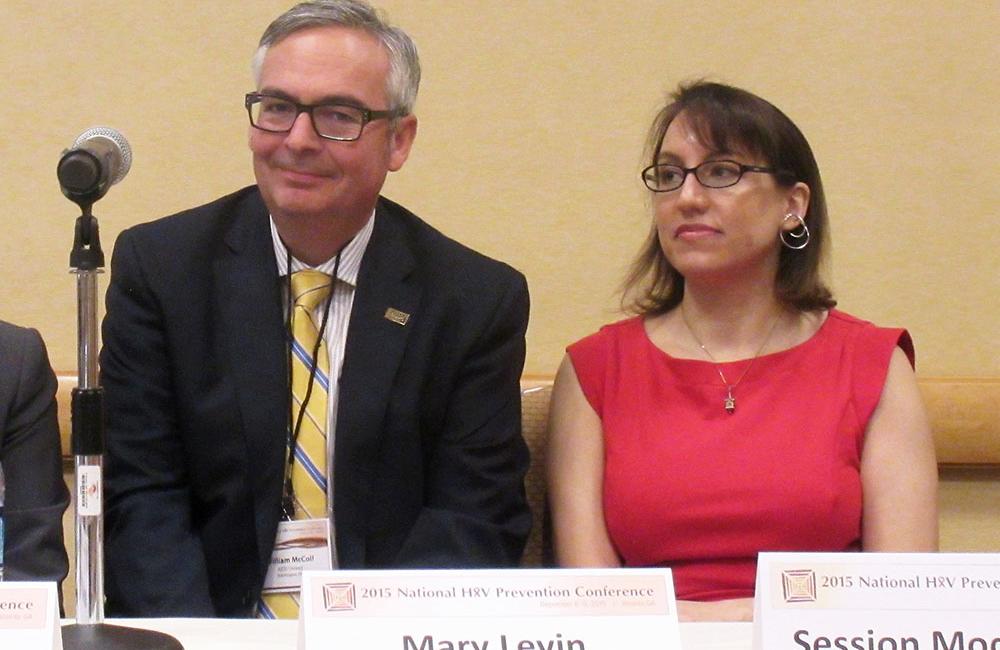 Providing sterile syringes is a proven effective way to prevent HIV and hepatitis C virus (HCV) infections among people who inject drugs, yet the US government continues to prohibit use of federal funds for this purpose, presenters said at the 2015 National HIV Prevention Conference (NHPC) last week in Atlanta. A federal budget bill now under consideration could lift the funding ban on syringe exchange programmes.

The 'high-impact prevention' initiative from the Centers for Disease Control and Prevention (CDC) aims to target the right combinations of scientifically proven, cost-effective and scalable interventions to the right people, at the right time and in the right geographic areas – and syringe exchange and distribution programmes have been shown to fill that role for people who inject drugs.

"We must address the needs of people who inject drugs and in particular the opioid epidemic," added Murray Penner, executive director of the National Alliance of State and Territorial AIDS Directors, during a panel discussion following Mermin's talk. "We must end the congressional ban on use of federal funds for syringe access programs."

At the International AIDS Society conference this summer John Brooks from the CDC's HIV Epidemiology Team described efforts to determine the source of the outbreak, halt further infections, and bring affected people into care. At IDWeek 2015 researchers reported that an emergency syringe program in Scott County led to a decrease in high-risk behaviours including needle sharing over its first five months.

Dita Broz of the CDC and colleagues analysed data from the 2012 National HIV Behavioural Surveillance system, looking at self-reported HIV risk behaviours among more than 10,000 people who inject drugs in 20 US cities, with and without large-scale syringe exchange programmes (SEPs), that distribute more than 55,000 syringes annually.

A related analysis found that while only half of people who inject drugs participating in the survey were recently tested for HIV, testing was more common among those who accessed health and HIV prevention services such as syringe exchanges.

"Together with past and current research on effectiveness of SEPs in reducing injection-related HIV transmission, these findings support the utility of SEPs as important HIV prevention tools in large urban centres in the United States," the researchers concluded.

Both cities have implemented combined prevention interventions including syringe programmes, opiate substitution treatment and antiretroviral therapy for HIV-positive people (available to all in New York City and those with a CD4 count above 350 cells/mm3 in Haiphong). Syringe distribution occurs primarily through SEPs in New York and pharmacy sales in Haiphong.

The researchers concluded that the HIV among people who inject drugs in New York "has reached an 'end of the epidemic' low incidence stage" (defined as > 0.5 per 100 person-years), with Haiphong running approximately 10 to 15 years behind.

Mary Beth Levin of Georgetown University School of Medicine and Bill McColl of AIDS United discussed ending the US federal funding ban on syringe programmes in a session on "Advancing HIV and Hepatitis Prevention for Drug Users." Levin explained that the ban – first implemented more than 20 years ago – was lifted in 2009 but reinstated by Congress in 2011.

According to Levin 8% of new HIV infections – or 11 per day – are attributable to sharing drug injection equipment, with a disproportionate number of cases occurring among African Americans and Latinos. Studies indicate that sterile syringe availability has reduced HIV among people who inject drugs by 80% – second only to the success of using antiretrovirals to prevent mother-to-child HIV transmission.

Lifting the federal funding ban would cost nothing in and of itself – it would simply allow local and state governments to use existing funds to cover syringe programmes. Experts estimate that every $1 spent on syringe programmes would lead to $7 in savings on HIV treatment costs, with the biggest savings accruing to Medicaid and Medicare (public insurance programmes for low-income and seniors, respectively).

In addition to preventing HIV and HCV infections, syringe exchanges can also serve as a bridge to bring people into substance use treatment and the broader healthcare system, and can encourage safe disposal of used syringes as users return them to the program.

"It is a myth that syringe exchange is controversial," Levin said, noting that such programmes currently exist in more than 30 states. "There is widespread local acceptance – everyone else is on board except for the feds."

McColl said that nearly half of all syringes distributed through existing programmes are paid for by the Syringe Access Fund, which will soon lose a substantial portion of its funding.

"Private funding alone cannot by itself solve the issue of syringe access for people who inject drugs," McColl stressed. "It is unacceptable that people think that's how it should be done."

Levin and McColl explained that the federal omnibus budget bill currently under consideration includes consensus House and Senate language that would allow funding for syringe access programmes in areas where there is a risk of HIV and HCV outbreaks.

"By becoming legal we gain financial stability and the ability to do more data and evaluation," Laura Thomas of the Drug Policy Alliance said during a roundtable discussion of harm reduction advocates. "Supervised injection facilities are the next place we're going to go."

Legalised pharmacy sales are also an important component. "Even if every county had a syringe exchange, that would not be enough," said Alessandra Ross of the California Department of Public Health. "Pharmacies are there, they're open at 2 am, and pharmacies are going to support a lot of people in a lot of areas."

Several speakers at the conference noted that the Indiana outbreak has called attention to the risk of injection-related HIV and hepatitis C beyond the stereotypical urban communities of colour and provides an opportunity to push for policy change – but the window may be brief.

The CDC estimates that at least 200 communities in 26 states are vulnerable to injection-related HIV and HCV outbreaks like the one in Indiana, CDC director Thomas Frieden said in his closing talk at the conference, emphasising, "We must make syringe exchange available where it's not available."

More Syringe Exchanges Can Open in New Jersey, Thanks to a New Law

The only syringe service program (SSP) in Charleston, the capital of West Virginia, is officially approved to stay open. The final decision lay with the Charleston City Council—as required under a new law that places onerous restrictions on SSP.
Filter
10 Dec 21
More editors' picks