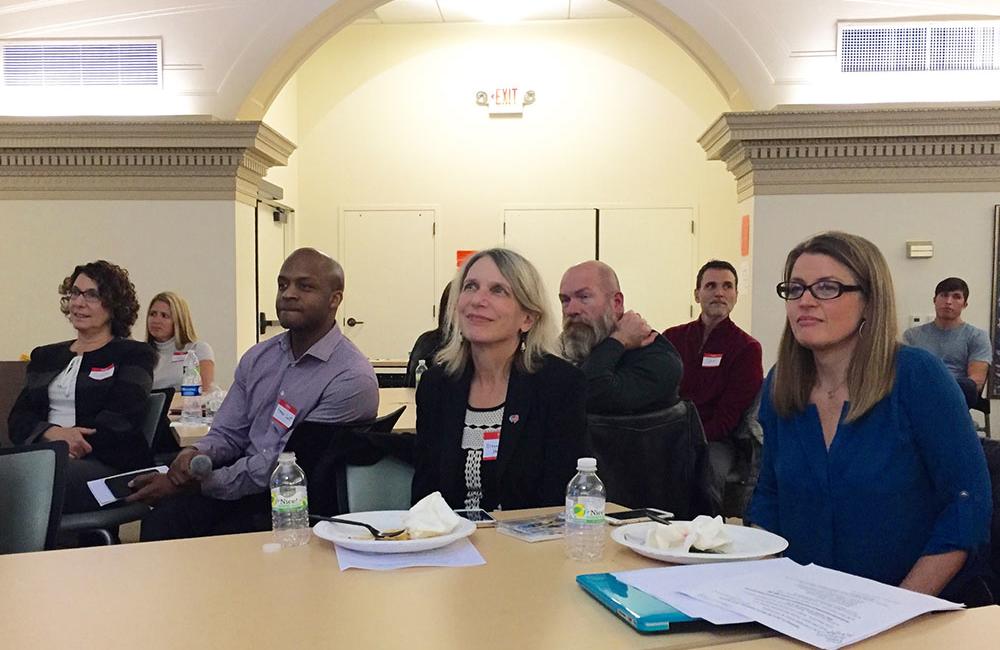 San Francisco made good progress in HIV prevention and treatment during 2015, and its successes have brought the city national and worldwide attention. But more work is needed to 'get to zero', especially reaching groups currently underserved by current efforts.

"Like Silicon Valley in the tech world, San Francisco is where innovation happens in the HIV world," Diane Havlir, chief of the HIV/AIDS division at San Francisco General Hospital, said at a December 1 forum commemorating World AIDS Day.

Havlir and committee members from the city's Getting to Zero Consortium gave a progress report on the initiative, which aims to make San Francisco the first US jurisdiction to eliminate new HIV infections, HIV-related deaths and HIV stigma and discrimination.

"Highlights of this year's accomplishments include a substantial increase in PrEP uptake, launch of a city-wide protocol to ensure immediate access to care and treatment for people newly diagnosed with HIV, and the beginning of a comprehensive program to increase retention in care for everyone living with HIV," said Susan Buchbinder, director of Bridge HIV at the San Francisco Department of Public Health (SF DPH). "In 2016, we'll build upon these early successes, with a particular focus on populations in greatest need."

In an update to the SF Health Commission Buchbinder presented findings from the SF DPH 2014 HIV Epidemiology Annual Report, showing that the number of newly diagnosed HIV infections in the city fell by more than 18%, from 371 in 2013 to 302 in 2014 – the lowest since the start of the epidemic. The number of new infections fell in all racial/ethnic groups and only 14 women were newly diagnosed last year. Deaths due to any cause among people with HIV fell by 15% during the same period, from 209 to 177.

The Getting to Zero initiative relies on a three-prong strategy of expanded access to pre-exposure prophylaxis (better known as PrEP), rapid access to antiretroviral therapy (ART) and retention of HIV-positive people in care.

PrEP – or use of antiretroviral drugs to prevent HIV from taking hold in the body after exposure – saw the most dramatic and highly publicised advances over the past year.

Data continue to accumulate confirming the effectiveness of PrEP, both in clinical trials and real-world use. Researchers reported that daily PrEP in the English PROUD study and intermittent or 'on demand' dosing in the French IPERGAY study both reduced the risk of HIV infection by 86%. A trio of PrEP demonstration projects in San Francisco, Miami and Washington, DC, found that no one who took PrEP regularly became infected. And no new infections have been seen so far among more than 650 mostly gay and bisexual men who received PrEP at Kaiser Permanente San Francisco.

The US Food and Drug Administration approved Gilead Sciences Truvada (tenofovir/emtricitabine) for PrEP in July 2012 and the Centers for Disease Control and Prevention (CDC) recommended in May 2014 that people at substantial risk should consider using it. But adoption was initially slow. While there has been an upsurge in the number of people taking PrEP over the last two years, most experts agree that it is probably too soon for it to have been a major factor in the decline of new HIV infections seen in San Francisco in 2014.

Limited available data indicate that a majority of PrEP users are white gay and bisexual men in their mid-thirties. Experts have suggested that between 10% and 15% of gay men in the city who are eligible for PrEP are currently taking it.

In an effort to expand access – and to reach out to other groups – the consortium has started a 'PrEP ambassador' program in which volunteers promote PrEP awareness within their communities. In addition, local agencies have used city funding to hire 'navigators' to help people gain access to Truvada for PrEP and figure out how to pay for it.

"Our work in San Francisco continues to be a model for how to scale up pre-exposure prophylaxis," said PrEP researcher Robert Grant from the UCSF Gladstone Institutes.

Getting and keeping people in care

One factor that likely has had an impact on the recent reduction in new HIV infections and deaths in San Francisco is early antiretroviral treatment.

In 2010 San Francisco was the first city to recommend antiretroviral therapy for everyone diagnosed with HIV regardless of CD4 T-cell count. US federal treatment guidelines adopted the same recommendation in 2012 and the World Health Organization did so this year.

Findings from the large START trial, reported at the International AIDS Society (IAS) Conference this summer, showed that starting treatment soon after diagnosis significantly lowers the risk of illness and death for people with HIV. Final data from the HPTN 052 study confirmed that HIV-positive people on treatment with an undetectable viral load have very low likelihood of transmitting the virus.

San Francisco continues to lead the way with its RAPID program, which aims to get people diagnosed with HIV on treatment as soon as possible, ideally the same day. Early data from a pilot program at SF General Hospital, also reported at the IAS conference, showed that 90% of eligible patients opted to start treatment on the day of their first visit. RAPID participants reached undetectable viral load in 56 days on average – less that half the time it took for those receiving standard care.

The Getting to Zero RAPID committee has developed a protocol for accelerated treatment that has already been adopted at San Francisco City Clinic and Kaiser Permanente, with a goal of expansion to all public and private providers citywide.

"RAPID is all about getting to zero delay in antiretroviral treatment," said RAPID researcher Christopher Pilcher from UCSF.

A look at the 'care cascade' shows that the city does better than California or the US as a whole. In 2013 an estimated 93% of people living with HIV in San Francisco were diagnosed, 69% received care and 60% achieved viral suppression, Susan Buchbinder reported; nationwide, the corresponding figures were 87%, 39% and 30%, respectively.

But people with HIV must remain in care to get the maximum benefits in terms of improved health and reduced transmission risk. Retention is the third pillar of the city's Getting to Zero effort – and may be the most difficult.

Socioeconomic issues are the "Achilles heel of retention," according to retention committee co-chair Andy Scheer of SF DPH. Many people with HIV who drop out of care are dealing with unstable housing or homelessness, mental health issues and drug or alcohol use.

"San Francisco's crisis of housing affordability and shortage of mental health and substance use services severely jeopardizes patients attempting to remain in care and be virologically suppressed," Scheer stressed. "Retention is a monster that requires a huge amount of time and money."

To date San Francisco has devoted US$1.2 million in city funds to Getting to Zero efforts. In late October the city announced that it received a grant of $500,000 from the MAC AIDS Fund to support retention in care. In addition CDC has awarded San Francisco $1.9 million over three years for PrEP expansion – part of its high-impact prevention effort targeting the most affected populations – as well as another $958,000 to develop ways to identify people who drop out of care and bring them back in.

Following a model established in the early years of the epidemic, San Francisco relies heavily on community-based organisations that can reach heavily affected groups including young gay and bisexual men, communities of colour, transgender people and sex workers.

"We don't believe in doing things top-down here," said Scott Weiner, a member of the city's Board of Supervisors or city council. "The reason San Francisco has had so much success is not because city government saying 'this is what were going to do,' but because of an amazing coalition of community-based advocates."

San Francisco's position as potentially the first city to end the epidemic was highlighted in several major media stories this year, including a profile in the New York Times. Mayor Ed Lee joined the Fast-Track Cities Initiative, collaborating with mayors and city governments from more than 50 cities worldwide with a high burden of HIV. UNAIDS executive director Michel Sidibé visited San Francisco this summer to observe some of its pioneering programs.

"Because the city has spent decades focused on meeting the human needs of marginalized communities, Getting to Zero's focus on the rapid scale-up of proven biomedical interventions is working," James Loduca of the San Francisco AIDS Foundation said at a World AIDS Day event this week at the White House. "Innovation is fundamental, but innovation alone doesn’t get the job done. Progress also requires compassion, collaboration, and community action."

Even as San Francisco leads the way in HIV prevention and treatment, it is also on the cutting edge of research towards a cure.

On November 30 amfAR announced that it had selected UCSF to host a new Institute for HIV Cure Research. The organisation launched the new initiative with an initial $20 million grant, which amfAR CEO Kevin Frost said was "a floor, not a ceiling."

"It's a nice bookend with the Getting to Zero initiative in that San Francisco seeks to be in the lead in ending the epidemic by applying treatment as public health and by fundamental research," said Paul Volberding, director of UCSF AIDS Research Institute and future head of the new cure institute. "That's more or less the story of our response to HIV/AIDS from the beginning – it's amazing to think of where we were and how far we've come."

A new expert consensus statement explores how providers can give birthing parents who are living with HIV the information they need to decide for themselves.
TheBodyPro
8 Jan 21
More editors' picks