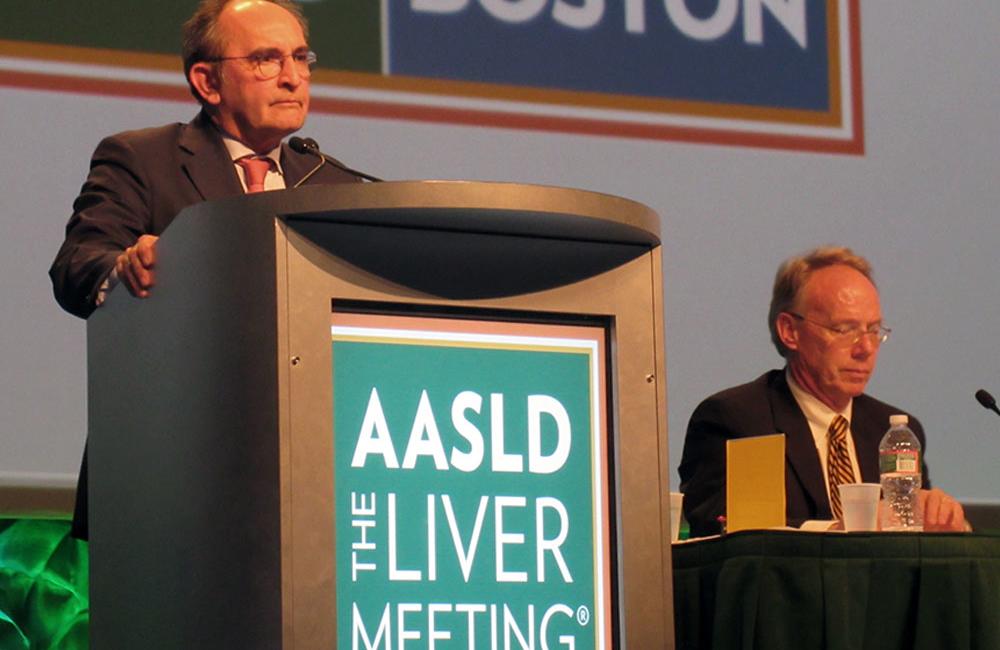 Marc Bourliere speaking at the American Association for the Study of Liver Diseases (AASLD) Liver Meeting. Photo by Liz Highleyman, hivandhepatitis.com.
This article is more than 8 years old. Click here for more recent articles on this topic

Difficult-to-treat hepatitis C patients with liver cirrhosis who were not cured with a prior course of first-generation HCV protease inhibitors had a sustained response rate of 96-97% when re-treated with sofosbuvir/ledipasvir with ribavirin for 12 weeks or without ribavirin for 24 weeks, researchers reported at the American Association for the Study of Liver Diseases (AASLD) Liver Meeting last month in Boston, United States. Sofosbuvir/ledipasvir also worked well for people previously treated with other sofosbuvir-containing regimens.

The advent of interferon-free therapy combining direct-acting antiviral agents that target different steps of the hepatitis C virus (HCV) lifecycle has brought about a revolution in treatment. But the best approach for hard-to-treat patients – including people who did not respond to previous treatment and those with extensive liver damage – remains to be determined.

Marc Bourlière of Hôpital Saint Joseph in Marseilles, France, reported findings from a French study of Gilead Sciences' nucleotide HCV polymerase inhibitor sofosbuvir and NS5A inhibitor ledipasvir given as a once-daily fixed-dose co-formulation, recently approved and marketed as Harvoni in Europe and the US.

Three-quarters of participants were men, most were white and the mean age was 56 years. A majority had harder-to-treat HCV subtype 1a and more than 90% had unfavourable IL28B gene variants. Compensated cirrhosis was an entry criterion, but one-quarter had stomach or oesophagus varices (distended veins), a sign of decompensation. The mean MELD score was 7, indicating a low mortality risk, but some patients had biomarker levels showing serious liver function impairment.

With regard to prior treatment, 59% had previously used telaprevir (Incivo or Incivek), 37% had used boceprevir (Victrelis) and one each had tried simeprevir (Olysio) and faldaprevir (discontinued). Nearly three-quarters had NS3/4A protease resistance-associated viral variants at baseline and 16% had NS5A resistance variants. Participants were stratified according to whether they had ever achieved undetectable HCV viral load during previous treatment (relapsers, viral breakthroughs and partial responders) or not (null responders).

All treatment failures were due to relapses, with three in the 12-week arm and two in the 24-week arm. All relapsers were men with unfavourable IL28B variants, two of whom had HCV subtype 1a while three had subtype 1b. Four were prior null responders while the fifth had a prior breakthrough during treatment.

Sofosbuvir/ledipasvir was generally safe and well-tolerated. Of the 155 participants, 154 completed treatment and follow-up. The remaining patient discontinued treatment early due to an adverse event while taking only placebo. Just one person experienced a serious adverse event considered to be treatment-related (anaemia).

In terms of cost, adding ribavirin for 12 weeks would be substantially less expensive than doubling the duration of sofosbuvir/ledipasvir to 24 weeks without ribavirin.

In a related study, David Wyles of the University of California at San Diego and colleagues looked at outcomes among people treated with sofosbuvir/ledipasvir plus ribavirin for 12 weeks after an unsuccessful attempt using sofosbuvir as the sole direct-acting antiviral.

This study included 51 people with genotype 1 hepatitis C. About 60% were men, most were white and the mean age was 54 years. Nearly 60% had HCV 1a, more than 90% had unfavourable IL28B variants and 29% had cirrhosis. Half had previously used sofosbuvir with pegylated interferon/ribavirin, 41% with ribavirin alone and 10% with placebo in prior clinical trials.

At 12 weeks post-treatment, the SVR12 rate was 98%. The single patient who relapsed was found to have been enrolled in error with genotype 3 (ledipasvir is primarily active against genotype 1, so is not indicated for this genotype).

Again, sofosbuvir/ledipasvir plus ribavirin was generally safe and well tolerated. Just two people experienced serious adverse events and one person discontinued for this reason. The most common side-effects were fatigue, headache, diarrhoea, rash, insomnia and nausea. There were five cases (10%) of moderate anaemia.

"These data support the [sofosbuvir/ledipasvir plus ribavirin] treatment regimen as an option for genotype 1 patients who have failed prior sofosbuvir + pegylated interferon/ribavirin or sofosbuvir + ribavirin regimens," the investigators concluded.