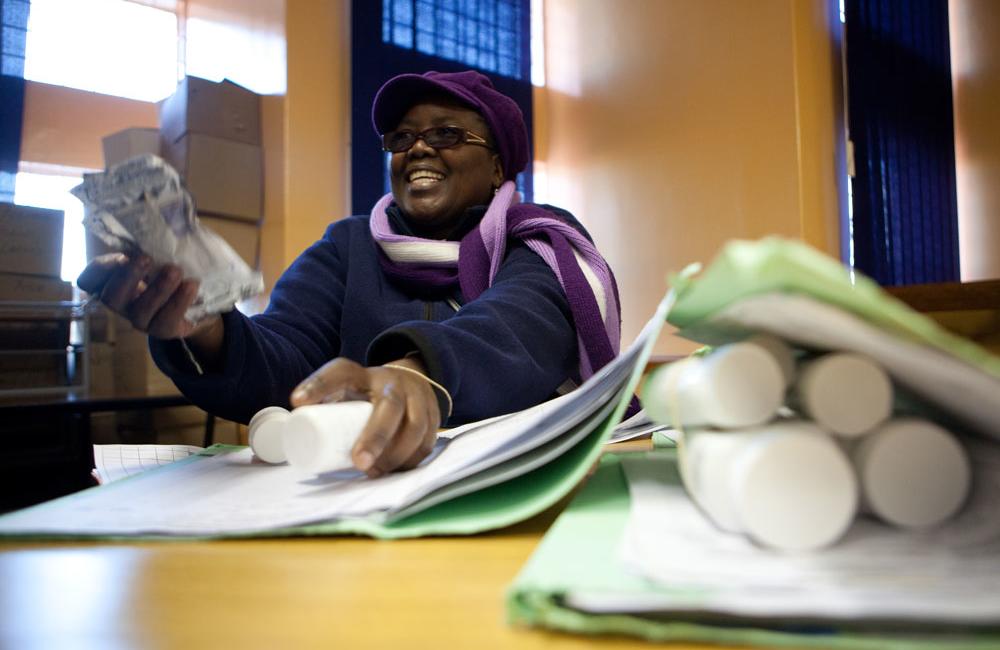 Pharmacists pre-pack all medication for facilitators to take to club meetings and distribute to patients. Thank you to MSF for the image, 'Khayelitsha' © Samantha Reinders
This article is more than 9 years old. Click here for more recent articles on this topic

An out-of-clinic model of HIV treatment delivery in South Africa has shown superior results to the standard in-clinic delivery of antiretrovirals (ARVs), according to results of an evaluation presented by Dr Gilles Van Cutsem at the Southern African HIV Clinicians Society conference in Cape Town, last week.

Retention in care was 97% for people in ARV Adherence Clubs compared to 85% for people who remained in mainstream clinic care. In addition, people in clubs were 67% less likely to develop virological rebound, according to a study which evaluated the effectiveness of adherence clubs.

The study evaluated the intention-to-treat effect of participation in an adherence club, comparing retention and virologic outcomes between patients enrolled in adherence clubs and in traditional clinic-based care.

In November 2007, a patient support and ARV delivery group programme was implemented by Médecins Sans Frontières (MSF) with the support of the Western Cape Department of Health and the Treatment Action Campaign, in Khayelitsha, Cape Town. The aim of the programme is to relieve the burden on formal health services, promote adherence through peer support, reduce waiting times for patients and to identify defaulters early.

In the adherence clubs, groups of 15 to 30 people are formed and convene every two months in meetings facilitated by non-clinical staff. In these groups, essential tasks, such as weight measurement and symptom-based general health assessment, are conducted by a trained counsellor (the club facilitator).

Medicines are pre-packaged for each participant and brought to the group by the facilitator. Anyone reporting symptoms suggestive of illness, adverse drug effects or weight loss is referred back to the clinic to be assessed by a nurse. A nurse attends these groups every six months (every third meeting) to draw blood for viral load and CD4 count testing.

A total of 2829 participants met the inclusion criteria of the study. In order to be eligible to be a club member, patients must have been on the same ARV regimen (including second-line) for at least 12 months, their two most recent consecutive viral loads must be undetectable and they must have no medical condition which requires regular clinical consultations. Participants receiving traditional clinic-based care had to meet the same criteria to be included in the study.

Club participation was strongly associated with virologic suppression (<400 copies/ml) at study entry (HR = 3.1, 95% CI 1.3-7.6), and during subsequent follow-up (HR = 4.5, 1.8-12.5). Patients with higher CD4 counts at study entry and an increasing CD4 count during follow-up, women, and patients who had been on ART for longer, were also more likely to be enrolled in a club.

“The adherence clubs only take 45 minutes and then it is done. People can still go to work and go on living in their lives. Before the adherence clubs you would go to the clinic at seven in the morning and when you leave, it is dinner time,” said Andile Madondile, a club member.

Retention to lifelong HIV care is a major challenge in many countries in sub-Saharan Africa. ARV treatment has been rapidly scaled up while the human resources and infrastructure have not grown at the same rate.

A total of 5195 people have thus far been enrolled in adherence clubs, with 4505 remaining in club care by 31 August 2012. Nineteen per cent of the 23,220 patients receiving ARVs at the Khayelitsha health facilities are managed through 180 clubs. Initially the adherence clubs were held at health facilities, but are increasingly being moved within walking distance of patient homes in community settings.

MSF hopes to increase the benefits of the adherence clubs by changing the club model to allow for three-month supply of ARVs (rather than two) and by utilising fixed-dose combinations once they are made available in the South African public sector. This will reduce the burden placed on clinic pharmacies when pre-packing ARVs.

The Western Cape Department of Health has adopted the ARV Adherence Club Model for phased roll-out and currently hosts over 400 clubs in the Cape Metro area. MSF is also in the process of running other pilot clubs such as evening clubs for working patients, youth clubs for adolescents and caregiver and child adherence clubs.

Due to growing interest in replicating the model, MSF has released a report and free step-by step practical toolkit.

"The virtual patient-centered medical home may be the new normal after COVID-19, and we have to be thinking about how we use this model with patients for whom it works, but supplement this model in patients that it does not," Jason Farley said at the virtual Association of Nurses in AIDS Care (ANAC) 2020 Annual Meeting.
Medscape (requires free registration)
16 Nov 20
More editors' picks