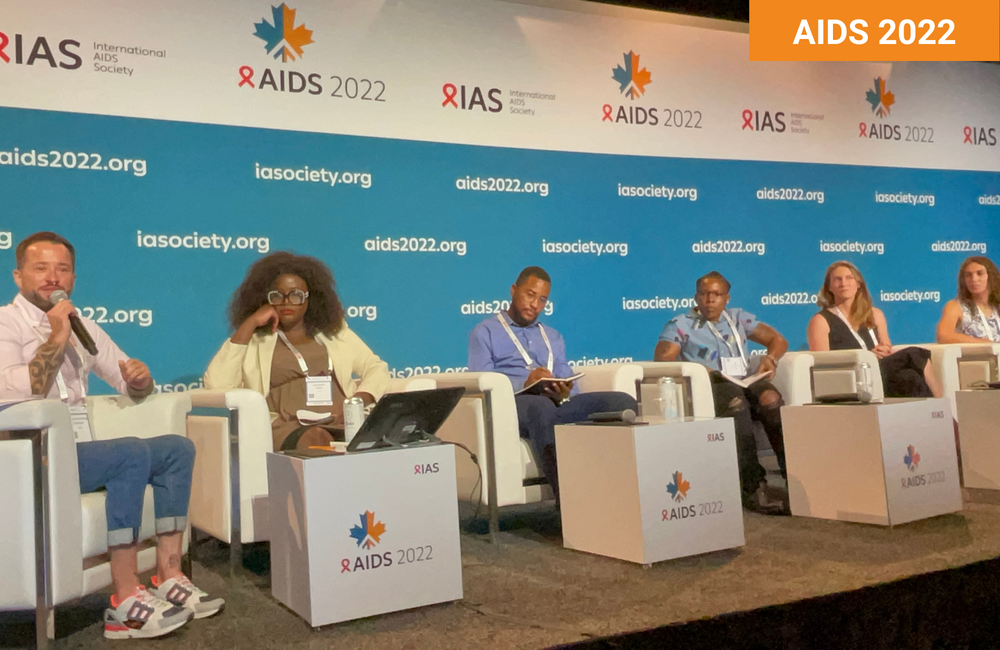 The Trans Inclusion in National HIV Policy and Planning session panel at AIDS 2022. Photo by @GATEOrg.

In a global sample of 60 countries with high HIV prevalence, only 8% fully included trans people in all aspects of their HIV national strategic plans. Some of these countries made no mention of trans people at all, according to research presented to the 24th International AIDS Conference (AIDS 2022) last week.

“What we see is that data does not always mean inclusion,” Jennifer Sherwood of amfAR, the Foundation for AIDS Research, told the conference. “Internationally, we have near-universal recognition that trans populations are a key population. They are included in every major global funder and policy institution’s documents – which point to both the recognition of higher risk and the call for specialised services – however, the extent to which national governments and documents include trans people is an open question.”

Sherwood and colleagues undertook a review of national HIV strategic plans to look for their inclusion of trans populations. National strategic plans are crucial documents that identify both the populations and strategies to be prioritised in a country’s HIV response. They also outline national targets and indicators to track progress, as well as often reporting the budgets that have been allocated. These plans are used by governments, advocates and international funders.

A sample of 60 plans from countries with the highest HIV prevalence from five UANIDS regions were selected for inclusion. Each national strategic plan was analysed for trans inclusion across five sections: narrative, epidemiological data, monitoring and evaluation indicators and targets, activities across the HIV continuum of care, and budgets.

National strategic plans were analysed for countries with the highest HIV prevalence in eastern and southern Africa (16), western and central Africa (15), Asia and the Pacific (13), Latin America and the Caribbean (9) and eastern Europe and central Asia (7).

Inclusion varied in different parts of the documents, with 62% of countries mentioning trans people generally in the narrative section of the plans, 38% in the activities section, 23% in the indicators and targets, 20% in the epidemiology sections and only 13% in the budgetary allocation sections.

"Countries such as China, Vietnam, Ethiopia and Tanzania did not include trans people at all in their national strategic plans."

However, differentiating trans populations from other key populations is crucial. “When we look at indicators and activities, we really want to push to see trans communities separated out, especially from men who have sex with men (MSM),” Elise Lankiewicz of amfAR said. “The public health community have traditionally grouped MSM and transgender people in epidemiological data and activities. That’s really not the way that it should be.”

The authors recommend that governments should meaningfully engage with trans communities when formulating strategic plans. International funders, such as the Global Fund and PEPFAR, can provide technical assistance and funding to trans community organisations, but can also require trans inclusion in any research that they are funding. Advocates need to decide what they want to be included in their country’s strategic plan (for example, trans specific budgetary targets for HIV prevention, or the use of peer navigators to conduct HIV testing activities) and how best to engage with government officials to ensure specific representation and inclusion. Engaging early is key to this process.

“In Kenya, every five years, a national strategic plan is released,” Alesandra Ogeta, from the Kenyan trans advocacy organisation Jinsiangu said. “We needed to know what to ask and advocate for, and when to advocate for it. We were very clear about what our priorities were when we approached government and what we were asking for. We noted that other key populations, such as MSM, female sex workers and people who inject drugs, had been mentioned but trans people had not been. This limits budgets and planning for access to services. If there is no data, there is no inclusion, there is no targeted mention of the population.”

Jay Mulucha, from the Fem Alliance, Uganda (FEMA), spoke about Uganda’s historical lack of inclusion of trans people in its strategic plan, and how their organisation trained trans activists to advocate for inclusion in the upcoming review of the national strategic plan. “A lot of trans persons in Uganda were not aware about the existence of the national strategic plan. Thus, this initiative was an empowering experience. The trans community is now more than ever very interested in participating in the upcoming review.”

Similarly, many trans people in Zambia were not aware of either the national plan or the services that were already available. "Most community members do not understand what the national AIDS strategic framework is, they do not understand that they can easily walk into a health facility and get services,” Chengo Chintu from the Transbantu Association said. Chintu emphasised the need to create awareness of what services are available, rather than just working on inclusion in the national strategic plan.