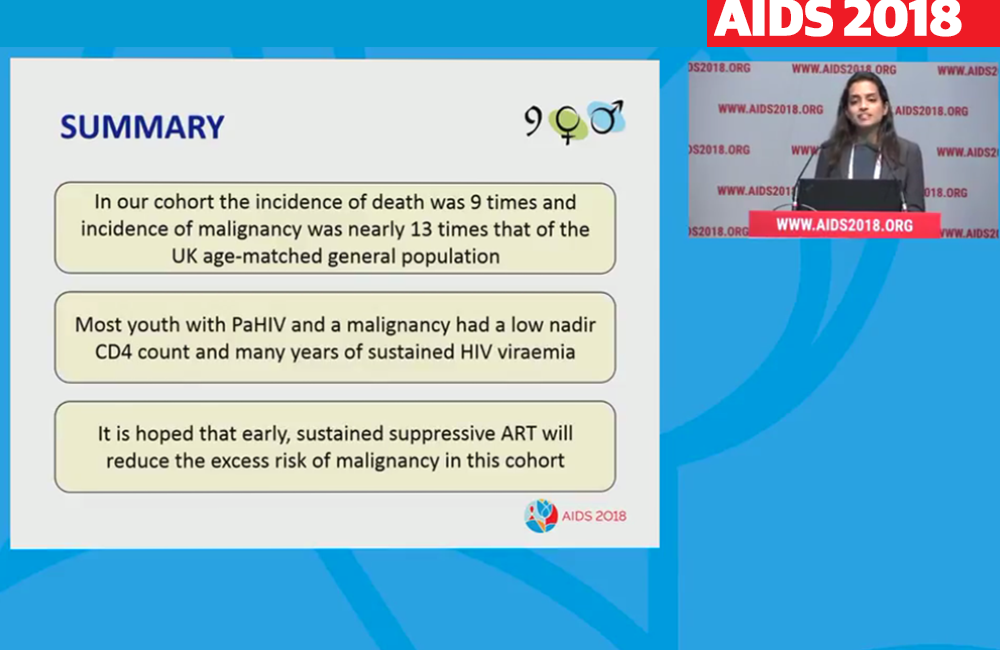 Image from the webcast of Srishti Chhabra presenting at AIDS 2018.

Adolescents and young adults who acquired HIV before or at birth had a 13-fold higher likelihood of developing cancer and a 9-fold higher risk of death, according to a study presented at the 22nd International AIDS Conference (AIDS 2018) last week in Amsterdam.

Development of cancer was associated with lack of viral suppression and lower nadir (lowest-ever) CD4 T cell count, leading the researchers to suggest that early, sustained antiretroviral treatment could help reduce the risk.

Research has shown that people living with HIV are at higher risk for developing several types of cancer. The AIDS-defining cancers Kaposi sarcoma (KS) and non-Hodgkin lymphoma (NHL), linked to advanced immune suppression, have declined dramatically since the advent of effective antiretroviral therapy (ART). HIV-positive people with well-preserved or restored immune function remain at elevated risk for certain cancers as they age, though this is reduced if they are on suppressive ART. Cancer rates among young people who have lived with HIV their entire lives have not been well studied.

Srishti Chhabra of Imperial College London and colleagues looked at the incidence of malignancies and the all-cause mortality rate for youth with perinatally acquired HIV infection, comparing it with rates for the general UK population of the same age.

This retrospective analysis included 290 adolescents and young adults, ages 10 to 24, who received care at Imperial College, London, from January 2004 to December 2017. They were followed from age 10 – or whatever their age when they entered the cohort – to age 25. During this time 14 transferred to other care and two were lost to follow-up.

In addition, one participant developed hepatocellular carcinoma (HCC), a type of primary liver cancer often associated with hepatitis B or C, and one had gastrointestinal adenocarcinoma.

The median CD4 count at the time of cancer diagnosis was 453 cells/mm3 but the median CD4 nadir was lower, at 220 cells/mm3. Of note, three people had current CD4 counts above 500 cells/mm3, often considered the threshold for normal immune function.

Four of the eight youths with cancer had detectable HIV viral load (> 50 copies/ml) at the time of cancer diagnosis. Overall, the group had lived with unsuppressed virus for a median of 15 years. Chhabra noted that all participants had effective antiretroviral regimens available to them and HIV care is free in the UK, but most had a longstanding history of poor treatment adherence.

Turning to mortality, six participants (2.1%) died during follow-up, at a median age of 17 years. The overall mortality rate for the HIV-positive young people was 2.3 per 1000 person-years – 9.4 times the rate of 0.2 per 1000 person-years for the age-matched general population. Half of them died of cancer, two died of HIV/AIDS related to poor adherence to ART and another died of cryptococcal meningitis, an opportunistic infection.

Looking more closely at outcomes, five of the youth were in remission from cancer, for a median duration of about a year and a half. One youth experienced lymphoma recurrence twice, but was in remission after a maternal bone marrow transplant. One person with B-cell NHL died at age 13 and the person with gastrointestinal cancer died at age 15. The youth with HCC had metastatic cancer and died at age 20 despite having suppressed HIV and hepatitis B virus for more than a decade.

Speaking from the audience, one of the study co-investigators said that some of the patients had been unable to receive standard cancer treatment in the early years of the study due to their HIV, but this had changed with the advent of effective modern antiretroviral treatment.

"Most youth with perinatally acquired HIV and a malignancy had a low nadir CD4 count and many years of sustained HIV viraemia," the researchers concluded. "It is hoped that early, sustained suppressive ART will reduce the excess risk of malignancy in this cohort."

Considering the mechanism that might drive increased cancer risk in people with perinatal HIV infection, Chhabra suggested that life-long HIV-related inflammation – especially among those who do not maintain viral suppression – might increase risk of developing malignancies.

She added that medication adherence can be a big challenge for HIV-positive youth at a time of physical, social and psychological change, and she recommended more support for adolescents and young adults living long-term with HIV.

FastPrEP uses an innovative differentiated approach to roll out and scale PrEP to adolescent girls and young women, their partners, and men who have sex with men.
Desmond Tutu Health Foundation
15 Jun 22
HIV treatment for children & young people

MSF has implemented a peer-led strategy with the goal of creating a trusting environment where all people feel comfortable accessing healthcare.
MSF
14 Jun 22
PrEP programmes & uptake

Even though the rate of new HIV infections in young women and adolescent girls remains stubbornly high, provision and uptake of pills that can prevent HIV infection have generally been slow and lagging. One potential solution presented at the recent Conference on Retroviruses and Opportunistic Infections is to provide the pills at schools.
Spotlight
2 Mar 22
More editors' picks