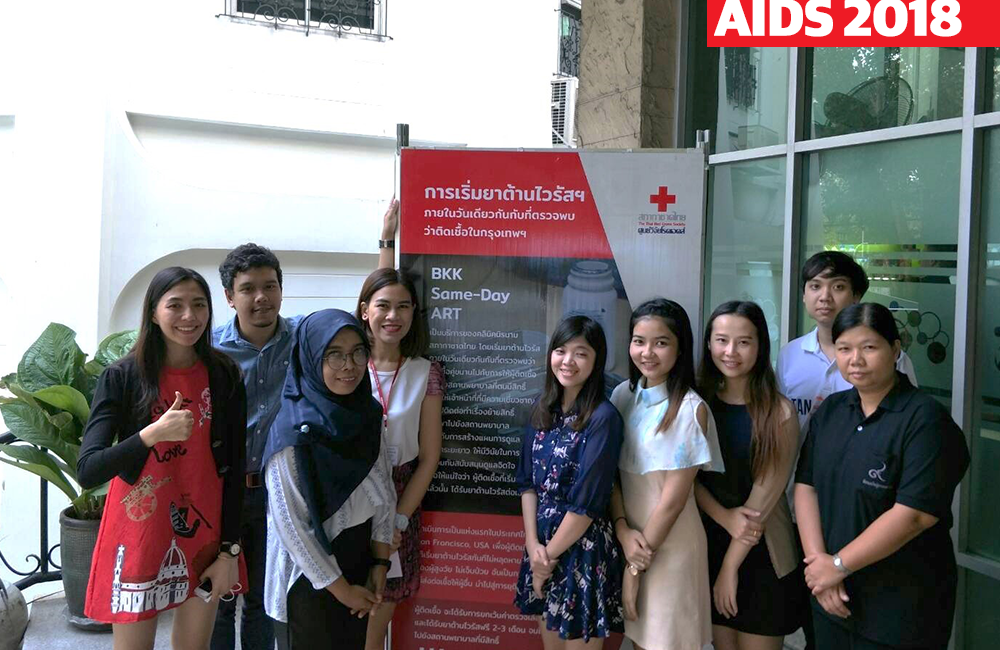 Starting treatment on the day of HIV diagnosis is acceptable and feasible for Thai patients, and people who started treatment very soon after diagnosis were more than twice as likely to have an undetectable viral load within 300 days of diagnosis when compared to people managed under existing Thai guidelines, the 22nd International AIDS Conference (AIDS 2018) heard last month in Amsterdam.

Thailand still has a long way to go to achieve the 'second 90' target of 90% of diagnosed people on treatment. Only 57% of people diagnosed with HIV in the Bangkok region are on treatment, Pich Seekaew of the Thai Red Cross AIDS Research Centre told the conference. Obstacles to rapid treatment initiation include the long waiting time for return of baseline test results, the requirement for multiple preparatory visits before starting treatment, and the reluctance of some physicians to provide treatment for people with high CD4 cell counts.

To test whether it was possible to speed up treatment initiation in the Thai health system, and to find out whether a same-day treatment start was acceptable to Thai patients after HIV diagnosis, the Thai Red Cross opened a Same-Day ART service in July 2017 at its anonymous HIV testing clinic.

The clinic carries out up to 200 HIV antibody tests each day, and around 8% are positive. The clinic offered a same-day treatment start to people if rapid tests and clinical examination indicated that they were free of tuberculosis, cryptococcal meningitis or any opportunistic infection that would require hospital admission, and if they were willing to start treatment immediately and able to come back for follow-up visits.

After HIV diagnosis, patients underwent a readiness assessment and counselling before having blood drawn, a physical exam and chest X-ray. Then, if eligible to start, they received tenofovir, emtricitabine and efavirenz, and were asked to come back to get the results of baseline tests and to report on any medication side-effects. At the same time, the clinic also began the process of linking the patient to long-term care. The clinic employs peer support workers to prepare patients for treatment.

The major obstacle to linkage to care for people diagnosed at the Anonymous Clinic is their assignment to a specific hospital under the Thai health benefit scheme. It may not be possible to change this assignment immediately, leading to the loss of patients from care. The Anonymous Clinic found that a high proportion of people testing positive at the service had already received a previous positive result (41.9%) and were using the service to re-engage in care.

Almost a quarter of those diagnosed were in urgent need of treatment, having CD4 cell counts below 200 cells/mm3, and a further 37% had a CD4 cell count between 201 and 350 cells/mm3.

Just under 80% of those who tested positive began treatment on the day of diagnosis, 8% within 1-2 days and 9% within 3-7 days. In comparison to a historical control group of people who tested positive at the same clinic between 2015 and 2017, people who started treatment on the same day were more than twice as likely to be virally suppressed during the first 300 days after diagnosis (hazard ratio 2.2, 95% CI 1.9-2.6, p < 0.001) and the median time to viral suppression was 162 days.

After diagnosis and treatment initiation, the Thai Red Cross Anonymous Clinic assisted patients to transfer their care to another clinic. Pich Seekaew said that 89% of patients who started treatment at the clinic were successfully referred to another clinic within 75 days of starting treatment. However, after six months on treatment, 7.7% of men who have sex with men and 15.8% of transgender women had been lost to follow-up.

The same-day treatment initiation model has already been expanded to 13 hospitals in five provinces because of the pilot, although Pich Seekaew noted that long-term results will depend on the performance of individual clinics. The model is labour-intensive and requires the availability of same-day CD4 counts and Xpert MTB/RIF testing for exclusion of active tuberculosis.