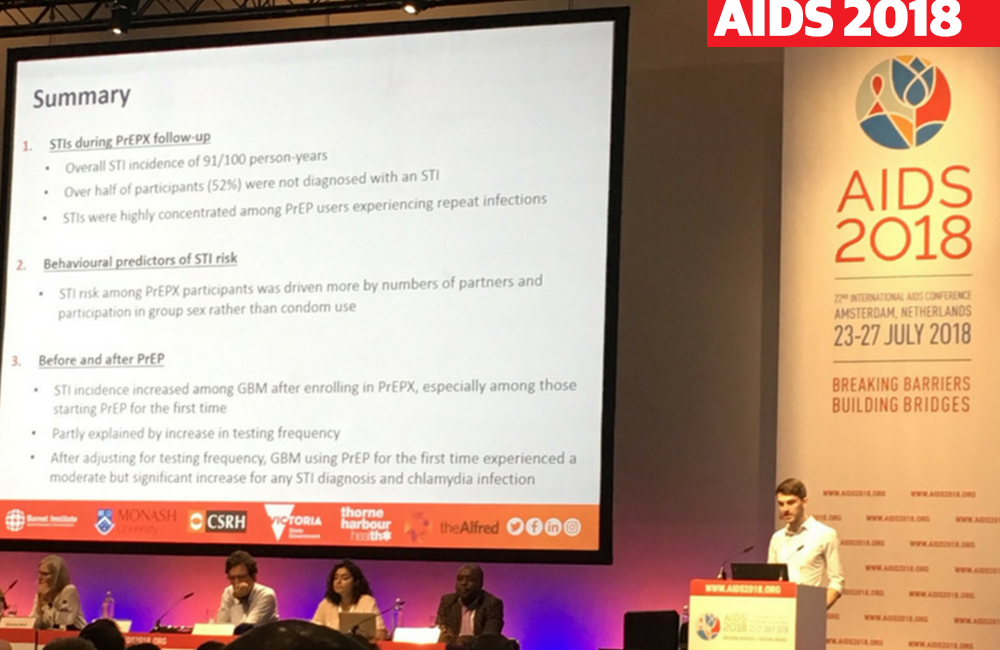 There were significant increases in bacterial sexually transmitted infections (STIs) in gay and bisexual men taking pre-exposure prophylaxis (PrEP) for the first time in Victoria, Australia, but infections were concentrated in a subset of PrEP users – 13% of the men had 53% of the STI diagnoses. Moreover, there was a 48% increase in STI testing which attenuated the overall increase in STI incidence, once it had been taken into account by the study’s statisticians.

Michael Traeger of the Burnet Institute reported these data at the 22nd International AIDS Conference (AIDS 2018) in Amsterdam last week.

The conference also heard data from an American cohort which charted gay and bisexual men’s sexual behaviour before, during and after taking PrEP. Within-person analyses showed much more condomless sex during periods of PrEP use, which significantly decreased in periods when men had discontinued PrEP. There was less of an impact on STIs.

Australia had its first pilot studies of PrEP in 2014, gave regulatory approval in early 2016 and began to reimburse most of its cost in March 2018. Uptake has been rapid in Melbourne (the capital of the state of Victoria) – 6% of gay men were using PrEP in January 2015, rising to 18% in January 2018.

Many of those taking PrEP are participants in PrEPX, an implementation study at ten clinics in a range of locations. The study’s primary objective is to see if the use of PrEP is associated with a reduction in HIV infections across the state, but the conference presentation gave interim findings on the study’s secondary outcome – sexually transmitted infections.

The overall incidence of STIs, averaged out across all participants, was 91.9 per 100 person-years. This means that in a group of 100 people followed for one year, there would be around 92 STI diagnoses. It does not mean that 92 of the 100 men would have an STI – a few men would have multiple STIs during the course of the year.

The next analysis looked at 1378 participants who had been attending the same clinic before they enrolled in PrEPX. This allowed the researchers to compare STI incidence in the 12 months before enrolment with STI incidence while in PrEPX.

However, incidence was greatly increased for men who took PrEP for the first time – from 55.1 per 100 person-years to 94.2 per 100 person-years (a 71% increase, p = < 0.001). An important factor that needs to be taken into account when looking at any data on this issue is that PrEP users are required to test for STIs every three months, thus multiplying the opportunities for infections to be diagnosed. The testing rate increased by 48% in people taking PrEP for the first time, which introduces a ‘detection bias’.

After making statistical adjustment for this, STI incidence increased by 21%. This remained statistically significant (p = 0.006) but is of moderate clinical significance.

The main behavioural factors which were associated with STIs were having more sexual partners and having group sex more frequently. Using condoms more or less often did not make any difference to STI rates. This suggests that interventions to reduce repeat STIs in PrEP users should focus more on partner numbers and on group sex than on condom use.

Jonathon Rendina of Hunter College presented data from the One Thousand Strong cohort of gay and bisexual men. The cohort was not set up to track PrEP usage but happened to enrol participants shortly after PrEP was approved in 2014 and has continued to engage its participants with annual surveys since then. The cohort therefore provides insight into changing behaviour during the first years of PrEP rollout in the US: 3% of participants were taking PrEP when they enrolled in the study in 2014-15, rising to 8% completing a survey after one year (2015-16), 14% completing the two-year survey (2016-17) and 21% of those in the three-year survey (2017-18).

This is a predominantly white and relatively affluent cohort. In contrast to some other cohorts, recruitment was not focused on individuals at particularly elevated risk of HIV.

Of the 1071 participants, 313 reported using PrEP during at least one survey. Whereas some previous studies have just had comparisons of sexual behaviour immediately before using PrEP and a few months after starting it, one strength of this data set is that it includes some data collected a full year or two after people started PrEP. During the first few weeks or months of using PrEP, some people may have a particular feeling of freedom and a great deal of condomless sex, but that behaviour won’t necessarily be sustained. Also, 5% of respondents in the last survey had previously used PrEP but had discontinued – the study provides insight into sexual behaviour after stopping PrEP.

“PrEP appears to be serving its exact purpose for the men who use it,” commented Jonathon Rendina. “They are taking PrEP when they are engaging in high risk and they are stopping PrEP at times when they are no longer at high risk.”

As part of the study, participants took a rectal swab for chlamydia and gonorrhoea at the same time as the survey. Before using PrEP, 7% of men had STIs; while using PrEP, 10% did; and after stopping PrEP, only 2% did.

Rendina questioned the importance of such rises in STIs given PrEP’s impact on HIV infection. He asked: “Is it worthwhile to continue our debates about risk compensation if what this means may be a jump from 7% incidence to 10% incidence?”

Rendina HJ et al. Changes in rectal STI incidence and behavioral HIV risk before, during, and after PrEP in a national sample of gay and bisexual men in the United States. 22nd International AIDS Conference (AIDS 2018), Amsterdam, abstract TUAC0202, 2018.

A team of researchers in Switzerland analyzed data collected from more than 10,000 people with HIV over a period of two years.
CATIE
12 Jan 23
Sexual health