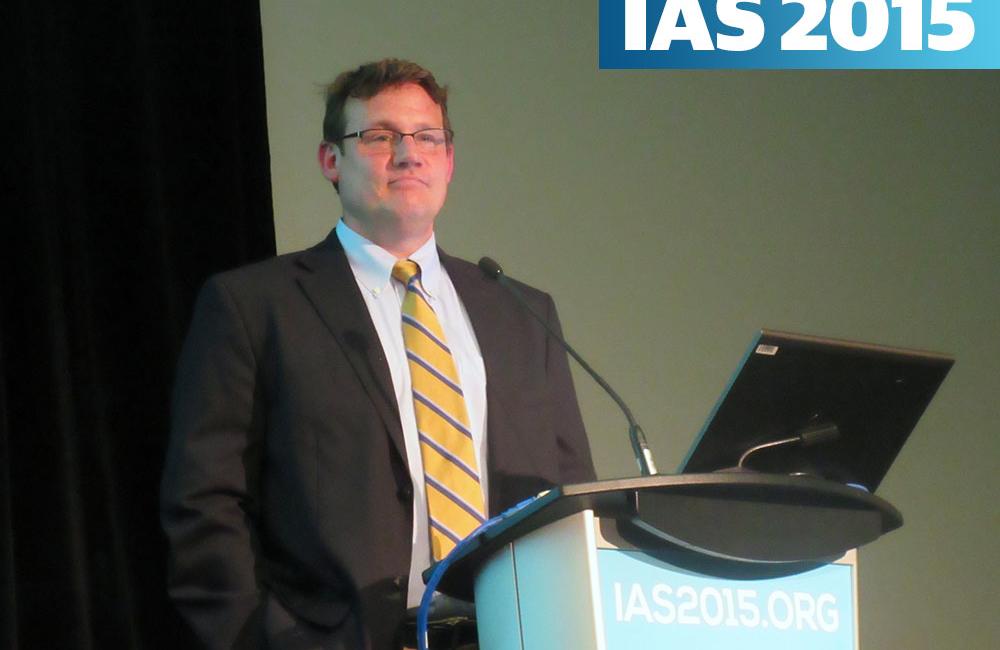 John Brooks at IAS 2015. Photo by Liz Highleyman, hivandhepatitis.com
This article is more than 7 years old. Click here for more recent articles on this topic

An early-2015 outbreak of HIV and hepatitis C virus (HCV) in rural Indiana, USA, linked to injection of prescription opiates, offers a good example of how to track and contain a localised outbreak, according to a pair of presentations at a late-breaking prevention research session at the Eighth International AIDS Society Conference on HIV Pathogenesis, Treatment and Prevention (IAS 2015) last month in Vancouver, Canada. Attendees at the session stressed that we already know how to prevent such outbreaks and called for implementation of needle exchange programmes and other proven-effective harm reduction measures.

In January 2015, the Indiana State Department of Health, later joined by the US Centers for Disease Control and Prevention (CDC), began investigating an HIV outbreak after disease intervention specialists confirmed nearly a dozen new infections in a rural community in Scott County, near the Kentucky border – a community of 4200 residents that had only reported five cases of HIV during the previous decade. Investigators traced the new infections to people who inject oxymorphone, a prescription opioid or opiate-like painkiller.

The CDC issued an official health advisory about the outbreak in April, and CDC and Indiana investigators published a brief report in the May 1 edition of Morbidity and Mortality Weekly Report.

John Brooks, leader of the CDC's HIV Epidemiology Team, described efforts to determine the source of the Indiana outbreak, trace patterns of transmission, halt further infections and bring affected people into care. He also presented results from a molecular epidemiology analysis of HIV and HCV strains, providing insight into how the viruses spread.

Brooks said that a disease intervention specialist first recognised that two people newly diagnosed with HIV had used the same needles for drug injection; contact tracing soon identified eight more cases. Health officials interviewed newly diagnosed individuals, asking about their use of non-sterile needles, the people they injected with and their sexual partners. People were given the opportunity to suggest any social contacts they thought "might benefit from an HIV test" without naming them as sex or drug use partners. All named individuals who could be located were offered HIV, HCV, hepatitis B virus and syphilis testing.

"It is past time for the federal ban on funding for syringe exchange to end," Steffanie Strathdee

Investigators identified nearly 500 individuals during contact tracing, 83% of whom were located, assessed for risk and tested for HIV. As of 14 June, a total of 170 people were diagnosed with HIV. After a rapid increase in mid-March and April, the outbreak plateaued. "We could tell we were closing in on the epidemic when no contacts named were new," Brooks said.

More than half (55%) of the newly diagnosed individuals were men, all were non-Hispanic white and the median age was 32 years. Among those who were diagnosed with HIV, about 40% reported sharing needles as their only risk factor, 1% reported only sexual risk, another 40% reported both sharing needles and sexual risk, and nearly 20% had unknown risk factors, according to the study abstract.

Almost all newly diagnosed people (96%) reported injection drug use. They described crushing, dissolving and heating extended-release oxymorphone, and some used methamphetamine and heroin as well. The reported daily number of injections ranged from 4 to 15, and the number of injection partners ranged from 1 to 6 per injection event. Interview participants reported that injection drug use in this community is often multi-generational, and family and community members frequently inject together and share syringes and other equipment. The Indiana outbreak reflects a recent upsurge in non-urban injection drug use in the US which has led to increases in acute HIV and HCV infection and overdose deaths.

Some features of this outbreak differ from those of other outbreaks previously seen among people who inject drugs in the US, according to Brooks. The newly diagnosed population was rural, all white, and nearly evenly split between men and women. In contrast, prior outbreaks have traditionally involved inner-city residents, often African-American or Latino, with a 2-to-1 ratio of men to women. But other factors of the Indiana outbreak were similar, including a high rate of poverty (19%), unemployment (9%), low education level (21% without a high school diploma) and limited access to insurance and health care.

Genetic analysis of HIV pol and HCV NS5B gene sequences from plasma samples collected from residents of Scott County and surrounding areas between October 2014 and April 2015 showed that HIV strains were closely related, while HCV strains were more diverse. Usually this type of testing is done retrospectively, Brooks noted, adding that he thought this was one of first times real-time phylogenetic data had been used to inform response to an ongoing outbreak, letting investigators know early on that it was geographically isolated.

There was a single large cluster of related HIV-1 subtype B strains (comprising 55 of 57 tested samples), along with a second very small cluster that Brooks said may represent pre-existing undiagnosed infections. Avidity testing showed that more than 90% of the HIV infections were recent. Phylogenetic trees for HCV were quite different; although three viral clusters were apparent, the "vast majority" of HCV strains did not fall into any of them. Among the 119 samples tested, the most common HCV genotypes were 1a (n = 82) and 3a (n = 29). Almost all people (>95%) diagnosed with HIV had HCV co-infection, while about one-third of samples from people with HCV showed HIV co-infection. Brooks explained that this picture is consistent with HIV newly arriving in a community with a high prevalence of pre-existing HCV of many different types.

Response to the outbreak

Brooks described the "enormous challenges" facing the affected population. Many were unemployed, most were uninsured and many did not have identifying documents such as birth certificates. The county is an "abstinence-only" jurisdiction that does not teach comprehensive sex education in schools. Medication-assisted or opiate substitution therapy for addiction treatment was not locally available. The community's sole family practitioner saw outpatients just four hours a week, and most people who received care for HIV or hepatitis C travelled out of town to do so.

In response to the outbreak, health officials set up a "one-stop shop," accessible on foot, where people could access multiple services including care co-ordination, vaccines, help obtaining documents, job training and assistance signing up for Medicaid. Fortunately, Indiana had recently extended its Medicaid programme under the Affordable Care Act – which 20 other states have still failed to do.

The state increased funding to expand capacity for HIV testing, care and pre-exposure prophylaxis (PrEP) and medication-assisted addiction treatment. Brooks said that about 70% of newly diagnosed people had entered HIV care, about 40% started antiretroviral therapy and all of these achieved viral suppression or substantial viral load decreases. The first 10 people who started PrEP were sexual partners of people who inject drugs, and more and more people who inject drugs have been asking about PrEP. HCV treatment has proven more challenging due to multiple barriers including the high cost of the new drugs, but Brooks noted there has been "a lot of interest" from providers in learning about hepatitis C care.

In the wake of the outbreak, public health officials started a media campaign and sent out a mailer to all county residents about HIV and hepatitis testing. Billboards and bus shelter ads encouraged people not to share needles. Jeanne Hale, the mother of Ryan White – the Indiana teenager who became a public face of AIDS in the 1980s – came to help educate and dispel stigma.

Summarising measures to control the outbreak, Brooks highlighted antiretroviral treatment for everyone with HIV; expanded testing including in prisons, emergency rooms and addiction services; efforts to decrease opioid over-prescribing; and "long-term solutions to improve public health infrastructure and socioeconomic disparities and to reduce stigma".

Prior to the outbreak, needle exchange was illegal in Indiana, as it still is in many states. Many newly diagnosed individuals had spent time in jail, with syringe possession being the leading reason. At the national level, there is still a ban on using federal funds for needle exchange. (The Obama administration lifted the long-standing ban in 2009, but Congress reinstated it in 2011.)

"It is past time for the federal ban on funding for syringe exchange to end," said session co-chair Steffanie Strathdee of the University of California at San Diego. "It's a travesty – we all know how to prevent this. We need to stop waiting until epidemics occur." (Strathdee and IAS 2015 co-chair Chris Beyrer of Johns Hopkins published an editorial on the Indiana outbreak and needle exchange in the July 30 New England Journal of Medicine.)

"This is déjà vu," concurred Michael O'Shaughnessy, founding director of the British Columbia Centre for Excellence in HIV/AIDS who spearheaded efforts to stem the HIV epidemic among people who inject drugs in Vancouver in the 1990s. Outbreaks like the one in Indiana are "entirely preventable," he added. "We need to get the politicians to smarten up – they're responsible for these infections."

People who receive opioid substitution therapy to manage drug addiction are more likely to be on antiretroviral treatment and achieve an undetectable HIV viral load, according to study findings published in the journal AIDS.
POZ
15 Sep 22
People who inject drugs

As with every political debate in Scotland, the seemingly never-ending row over devolved powers and independence from Westminster looms large. One proposed intervention is the introduction of drug consumption rooms, otherwise known as supervised consumption facilities or overdose prevention centers.
POLITICO
29 Jul 22
More editors' picks