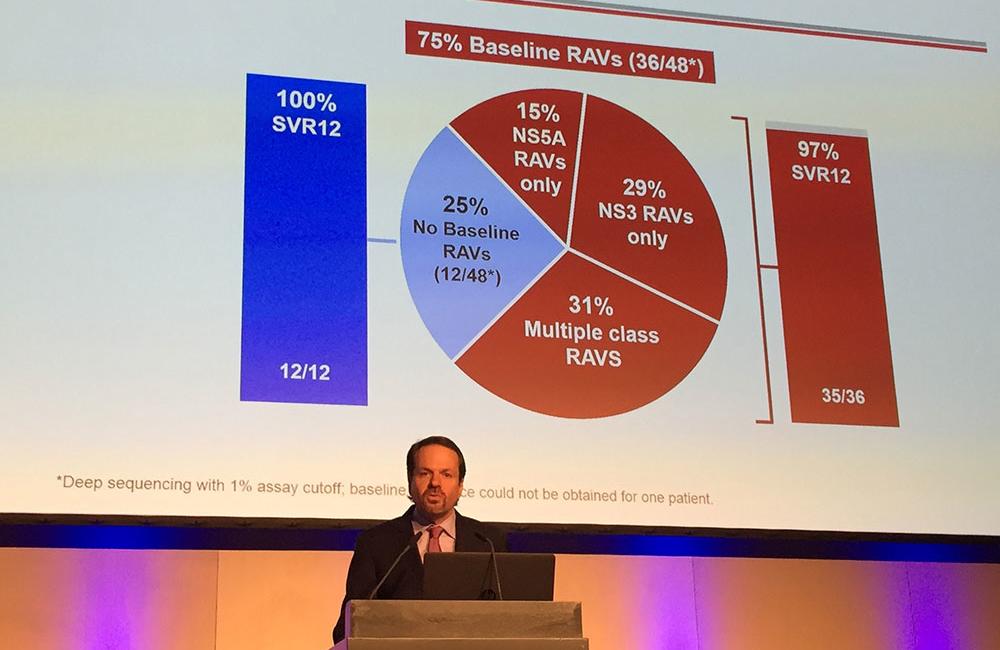 A triple combination of Gilead Sciences' sofosbuvir, velpatasvir and GS-9857 demonstrated a high sustained response rate for treatment-experienced people with all hepatitis C virus (HCV) genotypes who previously were not cured with prior direct-acting antivirals (DAAs), according to two presentations yesterday at the 2016 International Liver Congress in Barcelona.

Interferon-free DAA therapy has revolutionised treatment for chronic hepatitis C, but there is still room to optimise therapy for difficult-to-treat patients. Ideally such regimens will be pangenotypic, meaning they could be routinely prescribed without the need for HCV genotype testing.

The first presentation looked at a pair of studies evaluating sofosbuvir/velpatasvir plus GS-9857 in treatment-experienced patients with HCV genotypes 1-6, a majority of whom were not cured with previous regimens containing older NS5A inhibitors or multiple DAA drug classes.

About 80% of participants (all genotype 1 patients and a majority of genotype 2-6 patients) had previously used DAAs and half had tried drugs from two or more drug classes; the remaining genotype 2-6 patients had tried interferon/ribavirin without DAAs. Just over a quarter (27%) had previously used NS5A inhibitors. At baseline a majority (60%) had some resistance-associated variants (RAVs) – HCV mutations that confer drug resistance.

All participants in these open-label studies received sofosbuvir/velpatasvir as a fixed-dose coformulation (400/100mg) plus GS-9857, both taken orally once daily for 12 weeks.

A study of this combination presented last November at the AASLD Liver Meeting showed that a 6-week regimen was not long enough, and while 8 weeks worked well overall, the response rate with this duration was lower for people who had previously used DAAs, thus 12 weeks was chosen for the present trials.

The primary endpoint was sustained virological response, or continued undetectable HCV RNA at 12 weeks after completion of treatment (SVR12).

The sole relapser was a 58-year old white woman with cirrhosis and a pre-treatment HCV viral load of 7 log10 IU/ml. She had a NS5A RAV but no NS3 or NS5B RAVs at baseline. After treatment failure she had a new NS3 RAV.

The likelihood of a cure did not differ significantly based on presence of liver cirrhosis, prior use of NS5A inhibitors or the number of previous DAA classes used. SVR12 rates were 100% for people without and 99% for those with pre-treatment RAVs.

Treatment with sofosbuvir/velpatasvir plus GS-9857 was generally safe and well-tolerated. The most common adverse events were headache, fatigue, diarrhoea and nausea, mostly mild or moderate. There were no clinically significant laboratory abnormalities. One person discontinued treatment early due to gastritis but nevertheless achieved SVR12.

The second study, also presented by Dr Lawitz, evaluated a three-drug single-tablet regimen of sofosbuvir/velpatasvir/GS-9857, with or without ribavirin, for genotype 1 patients with prior DAA experience.

The phase 2 TRIOLOGY-3 trial enrolled 49 people at a single centre in Texas who had previously used a DAA regimen for at least 6 weeks; 41% had used an NS5A inhibitor. About two-thirds were men, three-quarters were white and the mean age was 54 years. Nearly 90% had harder-to-treat genotype 1a and again about half had cirrhosis.

The overall SVR12 rate was 98%. Everyone who used the triple combination alone was cured (100% SVR12). However, one patient who added ribavirin relapsed at week 4 of post-treatment follow-up, resulting in an SVR12 rate of 96%.

The sole relapser in this study was a 61-year-old black man with cirrhosis who had previously been treated with sofosbuvir/ledipasvir (Harvoni) for 24 weeks. He had three NS5A RAVs, but no NS3 or NS5B RAVs at baseline. After relapsing he had an additional NS5A RAV and four new NS3 RAVs.

Here too, treatment with sofosbuvir/velpatasvir plus GS-9857 was generally safe and well-tolerated, with just one serious adverse event and no treatment discontinuations due to adverse events.

While adding ribavirin did not improve efficacy, it did increase side-effects. Nine ribavirin recipients (36%) experienced fatigue and four (16%) developed anaemia, compared to none of those using the triple DAA regimen alone.

"Our study set out to evaluate the safety and efficacy of this investigational combination for hard-to-treat patients with genotype 1 hepatitis C," Dr Lawitz said in an EASL press release. "With the triple combination of three potent drugs, sofosbuvir, velpatasvir and GS-9857, we demonstrated that high SVR12 results were achieved with or without ribavirin."

Another related study at the conference showed that retreating DAA-experienced patients with sofosbuvir/velpatasvir plus ribavirin for 24 weeks was generally effective overall. But while cure rates were high for people with genotypes 1 or 2, genotype 3 patients with pre-existing NS5A RAVs had a lower response rate of 77%, leading presenter Edward Gane to conclude that these individuals may require a more potent third agent such as GS-9857.