Sofosbuvir, daclatasvir and ribavirin cures hepatitis C for most people with advanced cirrhosis or liver transplants 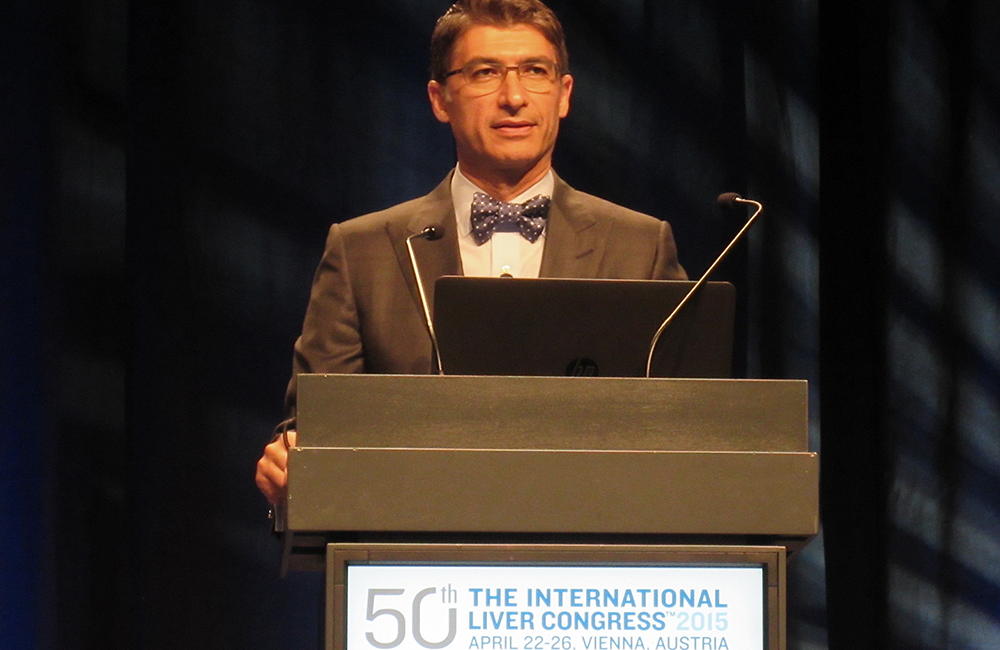 Fred Poordad of the University of Texas Health Science Center, presenting results of the ALLY-1 study. Photo by Liz Highleyman, hivandhepatitis.com
This article is more than 7 years old. Click here for more recent articles on this topic

An interferon-free regimen of sofosbuvir, daclatasvir and ribavirin for 12 weeks produced sustained response rates of 83% for people with hepatitis C virus (HCV) who had advanced liver cirrhosis and 94% for people who had received liver transplants, with similar cure rates for those with hard-to-treat HCV genotype 3, according to findings from the ALLY-1 study presented at a late-breaker session on Saturday at the European Association for the Study of the Liver (EASL) 50th International Liver Congress in Vienna, Austria. More than half of study participants with the most severe decompensated cirrhosis achieved sustained response.

The advent of direct-acting antiviral agents that can be used in interferon-free regimens has brought about a revolution in treatment for chronic hepatitis C, but there is still a need for better therapeutic options for groups with difficult-to-treat hepatitis including people with HCV genotype 3, people with advanced liver disease and liver transplant recipients.

Drug that reduces or prevents immune system activity. Some drugs used for cancer chemotherapy are immunosuppressant.

Sofosbuvir and daclatasvir are pangenotypic, meaning they are active against multiple HCV genotypes. Gilead’s NS5A inhibitor ledipasvir (combined with sofosbuvir in the Harvoni coformulation), in contrast, has minimal activity against genotype 3. Daclatasvir is approved in the European Union and Japan, and has been submitted for approval from the US Food and Drug Administration (FDA).

As described by Fred Poordad of the University of Texas Health Science Center, ALLY-1 enrolled 60 people with hepatitis C and advanced liver cirrhosis and 53 people who experienced HCV recurrence after liver transplantation.

The people with advanced cirrhosis were divided into subgroups based on Child-Pugh class, an index of liver disease severity and prognosis based on bilirubin and albumin levels, blood clotting capacity and presence of ascites (abdominal fluid accumulation) or hepatic encephalopathy (brain impairment). Twelve were Class A, 32 were Class B and 16 were the most severe Class C. Most people in Class A or B had MELD scores less than 15 (another measure of liver disease severity), while half in Class C had a MELD score of 16-20 and a quarter had scores above 21. Sixty per cent of people in Class B and all the participants in Class C had ascites and/or encephalopathy – symptoms of liver decompensation. Six had hepatocellular carcinoma (liver cancer).

In the post-transplant cohort, 43% had absent to moderate liver fibrosis (Metavir stage F0-F2), 25% had advanced fibrosis (stage F3) and 30% had cirrhosis (stage F4). They had undergone transplantation at least three months prior, had no evidence of graft rejection at enrolment and could be taking any immunosuppressant regimen.

All participants in this open-label study received 400mg once-daily sofosbuvir, 60mg once-daily daclatasvir and ribavirin for 12 weeks. Ribavirin was started at a dose of 600mg/day, which could be adjusted based on tolerability. People in the cirrhosis cohort who interrupted therapy to undergo a liver transplant could receive 12 additional weeks of extended therapy post-transplantation.

Overall, 83% of the people with advanced cirrhosis and 94% of the post-transplant participants achieved SVR12, or HCV RNA below the lower limit of quantification (<25 IU/ml) at 12 weeks post-treatment (SVR12). Looking just at the people with genotype 1, the corresponding cure rates were 82% and 95%.

All but one of the 13 people who did not achieve SVR12 relapsed after the end of treatment. People who relapsed are now being re-treated with the same regimen for 24 weeks.

Looking at other factors associated with response in the cirrhosis cohort, SVR12 rates were 92% and 94% for CP Class A and B, but fell to 56% for Class C. This difference was largely driven by low albumin levels, Poordad said. SVR12 rates did not differ significantly according to demographic factors, prior treatment experience or baseline HCV RNA level.

Changes in MELD score were inconsistent, with little change in the Class A group, and more improvement than worsening in the Class B and C groups – including a few large declines among people with Class C. Four of the people with cirrhosis who had hepatocellular carcinoma received a liver transplant during treatment (including one from a donor with HCV) and all achieved SVR12.

Poordad raised the possibility that people with advanced cirrhosis might see enough improvement in their MELD scores with treatment to lower their eligibility for transplantation, but not enough to no longer need a new liver. "I worry we may do more harm than good," he cautioned. Further research is needed to identify which CP Class C patients are most likely to benefit from treatment.

Updated EASL hepatitis C treatment guidelines released at the Liver Congress include sofosbuvir plus daclatasvir, with or without ribavirin, as a recommended regimen for people with HCV genotype 3.