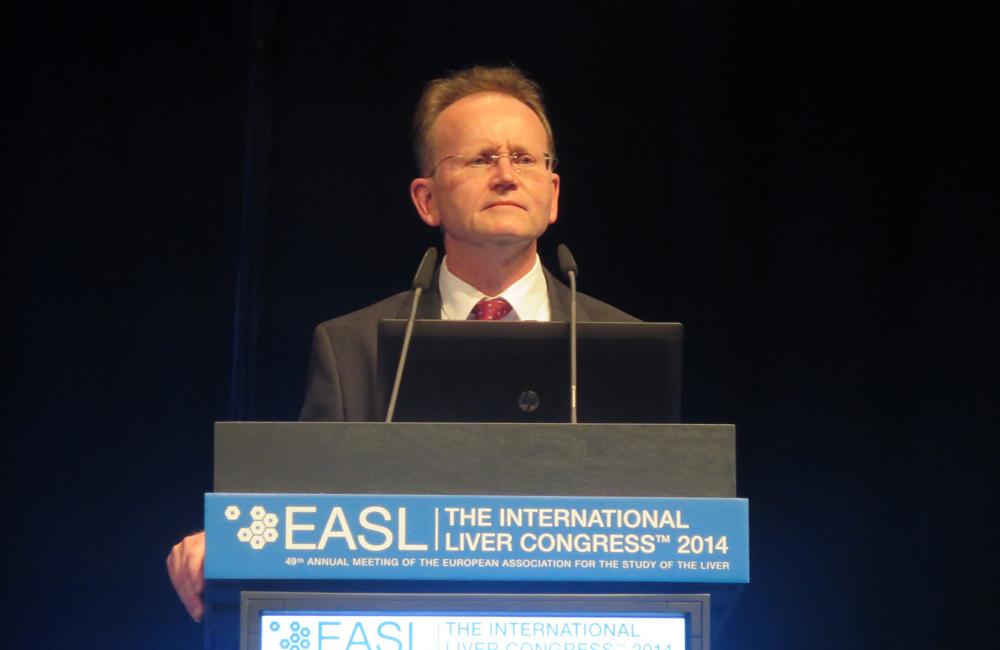 A co-formulation of sofosbuvir and ledipasvir successfully treated a variety of difficult-to-treat patient populations including people with hepatitis C virus (HCV) genotype 3, people with decompensated cirrhosis and people who were not cured with previous sofosbuvir-containing therapy, according to a series of studies presented on Thursday at the 49th Annual Meeting of the European Association for the Study of the Liver (EASL) in London.

Data from the phase 3 ION trials of the sofosbuvir/ledipasvir co-formulation will be presented later at the conference.

One cohort consisted of 51 previously untreated participants with HCV genotype 3. Genotypes 2 and 3 were once classified together as 'easy to treat', but it is now known that genotype 3 does not respond as well to direct-acting antivirals.

Just over half of the participants were women, most were white and the mean age was approximately 45 years. About half had the favourable IL28B CC genetic variant and about 15% had liver cirrhosis. They were randomised to receive the sofosbuvir/ledipasvir co-formulation either alone or with ribavirin for 12 weeks.

Treatment was generally safe and well-tolerated. There were four serious adverse events and one early discontinuation for this reason in the sofosbuvir/ledipasvir arm, but none in the group that also took ribavirin. However, three people (12%) taking ribavirin developed moderate anaemia (haemoglobin <10 g/dL), which was not seen in the ribavirin-sparing arm.

The second cohort included 20 people with HCV genotype 1 and decompensated cirrhosis (Child-Pugh-Turcotte 'B' classification). Most were white men and the mean age was 56 years. Most (90%) had harder-to-treat HCV subtype 1a and about one-third had the IL28B CC variant. About one-third had hepatic encephalopathy (cognitive impairment) and 20% had ascites (abdominal fluid accumulation).

Everyone in this group received the sofosbuvir/ledipasvir co-formulation for 12 weeks. They did not use ribavirin, which is often poorly tolerated by people with advanced liver disease.

While the sustained response rate for this cohort was modest compared to rates seen in other groups which also included ribavirin, Gane noted that people with decompensated liver disease "currently have no treatment options".

The final cohort included 19 people with genotype 1 HCV who relapsed after prior treatment with sofosbuvir-containing regimens in the ELECTRON-1 study. Everyone in this cohort was retreated with open-label sofosbuvir/ledipasvir plus ribavirin for 12 weeks.

Two-thirds of participants were men, most were white and the mean age was 55 years. Most (89%) had HCV subtype 1a, 21% had the IL28B CC variant and none had cirrhosis. About half had previously taken sofosbuvir/ribavirin for 12 weeks, eight had taken sofosbuvir/ledipasvir plus ribavirin for only six weeks and one had used sofosbuvir/ledipasvir plus the investigational non-nucleoside polymerase inhibitor GS-9669. All previously relapsed after achieving undetectable HCV viral load during treatment.

All participants in this cohort achieved SVR12. There were no serious adverse events or early discontinuations for this reason. Three people (16%) developed moderate anaemia.

Anu Osinusi of the US National Institute of Allergy and Infectious Diseases (NIAID) reported findings from another study evaluating sofosbuvir/ledipasvir for people with HCV genotype 1 who relapsed after prior treatment with sofosbuvir/ribavirin.

More than 90% were African-American men, with a median age of 60 years. A majority (57%) had HCV subtype 1a, only 14% had the favourable IL28B CC variant and half had advanced fibrosis or cirrhosis (stage F3-F4). An average of 57 weeks elapsed between the two courses of treatment.

All 14 patients reached undetectable HCV RNA by week 4 of treatment and maintained viral suppression through the end of post-treatment follow-up, giving an SVR12 rate of 100%. This included one person with a S282T mutation detected after prior relapse.

Treatment was well-tolerated with no serious adverse events or discontinuations. There was no significant change in haemoglobin level, unlike the drop seen earlier with sofosbuvir/ribavirin.

"These results suggest that patients who fail sofosbuvir/ribavirin therapy can be successfully retreated with sofosbuvir/ledipasvir for 12 weeks," the researchers concluded.

Rafael Esteban of Vall d’Hebron Hospital in Barcelona and colleagues looked at people with HCV genotypes 2 or 3 who relapsed after receiving sofosbuvir/ribavirin for 12 weeks in prior pivotal trials. This study aimed to determine if retreating these patients with the same regimen for a longer duration or adding pegylated interferon would improve cure rates.

A total of 107 participants enrolled in the study. About 80% were men, most were white and the mean age was 53 years. Almost all (93%) had HCV genotype 3, given that most genotype 2 patients had previously been cured. About 35% had cirrhosis and a similar proportion had the IL28B CC variant.

SVR12 data were available for 26 patients who opted for extended duration sofosbuvir/ribavirin and 40 who chose to add interferon (the rest are still undergoing treatment or follow-up).

All participants in both treatment groups had undetectable HCV viral load at week 4 and at the end of treatment. However, there were several post-treatment relapses, resulting in SVR12 rates of 63% in the 24-week sofosbuvir/ribavirin arm and 92% in the 12-week triple therapy arm.

Triple therapy worked well for patients with or without cirrhosis (SVR12 rates of 88% and 93%, respectively). However, extended sofosbuvir/ribavirin alone cured fewer than half (47%) of people with cirrhosis, compared with 74% of people who did not have cirrhosis.

Again, treatment was generally well-tolerated. Four people in the extended sofosbuvir/ribavirin arm and one in the triple therapy arm experienced serious adverse events, though there were no early discontinuations for this reason.

"The 12-week regimen containing interferon had higher overall rates of SVR and was more effective in patients with cirrhosis," the researchers concluded. "The 24-week interferon-free regimen was safe and well tolerated and offers a retreatment option for those ineligible to receive interferon."

As the other studies showed, however, dual therapy with sofosbuvir and ledipasvir may be a more effective, convenient and better tolerated retreatment option.

Osinusi A et al. Retreatment of relapsers to sofosbuvir/ribavirin with sofosbuvir/ledipasvir: complete and rapid virologic suppression by week 4.  49th Annual Meeting of the European Association for the Study of the Liver (EASL), abstract 011, London, 2014.

Esteban R et al. Successful retreatment with sofosbuvir-containing regimens for HCV genotype 2 or 3 infected patients who failed prior sofosbuvir plus ribavirin therapy. 49th Annual Meeting of the European Association for the Study of the Liver (EASL), abstract 08, London, 2014.