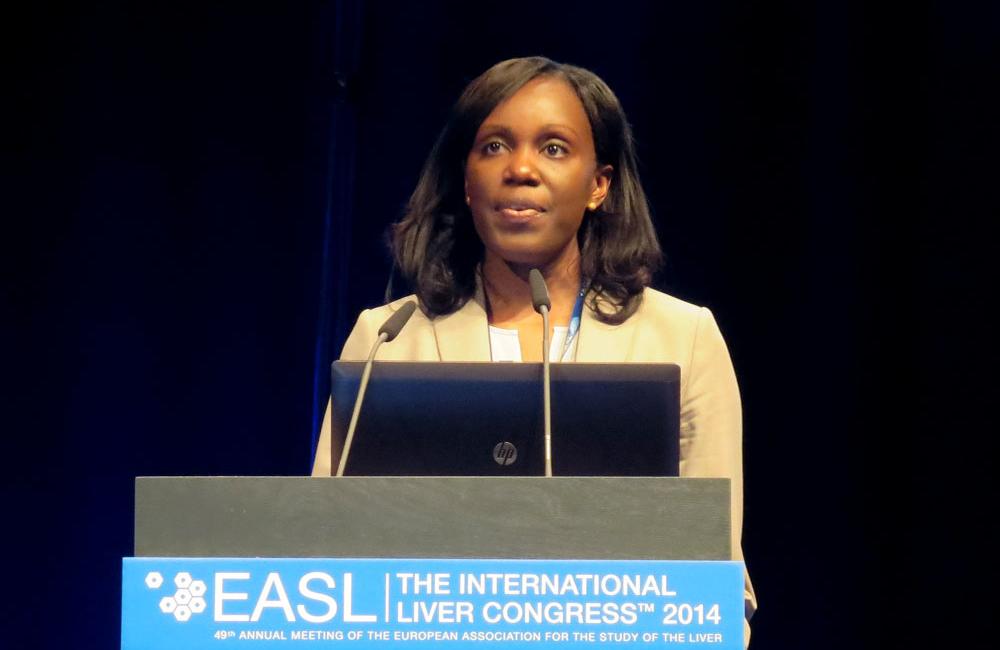 Anu Osinusi, from the U.S. National Institute of Allergy and Infectious Diseases, speaking at the International Liver Congress 2014. Photo by Liz Highleyman, hivandhepatitis.com.
This article is more than 8 years old. Click here for more recent articles on this topic

Treatment for 12 weeks with a co-formulation of sofosbuvir and ledipasvir led to sustained response for all participants with HIV and HCV co-infection who had genotype 1 hepatitis C virus (HCV) followed for 12 weeks post-treatment, according to interim findings from the ERADICATE study presented on Thursday at the 49th Annual Meeting of the European Association for the Study of the Liver in London.

Historically, people with HIV and HCV co-infection have not responded as well to interferon-based therapy as HIV-negative people with HCV alone, but recent data suggest that interferon-free direct-acting antiviral regimens may be equally effective in people with HIV. The PHOTON-1 study testing sofosbuvir plus ribavirin found that people with co-infection had sustained virological response rates at 12 weeks post-treatment (SVR12) similar to those previously seen in HCV mono-infected patients.

The NIAID ERADICATE trial was an investigator-initiated study that included 50 HIV-positive people with genotype 1 HCV co-infection; about 80% had harder-to-treat subtype 1a. A majority were men, most were African-American and the median age was approximately 58 years. About one-quarter had advanced liver fibrosis (stage F3), but none had cirrhosis.

Participants were divided into two groups according to HIV treatment status. The ARV-untreated group included 13 people who were not on antiretroviral therapy (ART) and had either a stable CD4 cell count and HIV RNA below 500 copies/ml or a CD4 cell count greater than 500 cells/mm3 (above the threshold for starting ART in previous HIV treatment guidelines). The median CD4 count was 687 cells/mm3.

The ARV-treated group included 37 people who had been on their current ART regimen for at least eight weeks, had undetectable HIV RNA (<40 copies/ml) and had a CD4 count greater than 100 cells/mm3 (median 576 cells/mm3). Treated participants used antiretrovirals that do not have clinically meaningful interactions with sofosbuvir or ledipasvir. Everyone was on tenofovir/FTC (the drugs in Truvada); in addition, 41% used efavirenz (Sustiva), 27% used raltegravir (Isentress) and 21% used rilpivirine (Edurant).

All participants were treated with the sofosbuvir/ledipasvir co-formulation for 12 weeks. The ARV-untreated group, which started sooner, had long enough follow-up to determine SVR12, which is considered a cure for hepatitis C. The ARV-treated group was still being followed, but a majority had SVR4 data available. SVR4 cannot yet be considered a cure as some people still relapse after this point.

All participants reached undetectable HCV RNA by week 4 of treatment and had continued virological response at the end of treatment.

Looking at HIV outcomes, in the ARV-untreated group there were no clinically significant changes in HIV RNA during hepatitis C treatment. One person in the ARV-treated group experienced a transient HIV RNA increase after missing antiretrovirals for four days, but resumed HIV suppression on the same regimen. CD4 cell counts and percentages remained stable in both groups throughout hepatitis C treatment.

Sofosbuvir/ledipasvir was generally safe and well-tolerated. There were no serious adverse events or early discontinuations for this reason in either group. The most common side-effects were headache, fatigue, pain, nausea, diarrhoea and constipation. There were no notable changes in serum creatinine or estimated GFR (measures of kidney function) over time in either group.

In light of these promising results, an audience member asked about the prospect of reducing sofosbuvir/ledipasvir treatment duration to 8 weeks. Osinusi replied that many interferon-free studies have now suggested that HIV is not a risk factor for poorer response. "If an 8-week duration works in [HCV] mono-infected patients, I don’t see why it shouldn’t in co-infected [patients] as well," she said.

Osinusi A et al. Use of sofosbuvir/ledipasvir fixed dose combination for treatment of HCV genotype-1 in patients coinfected with HIV. 49th Annual Meeting of the European Association for the Study of the Liver (EASL), abstract 014, London, 2014.