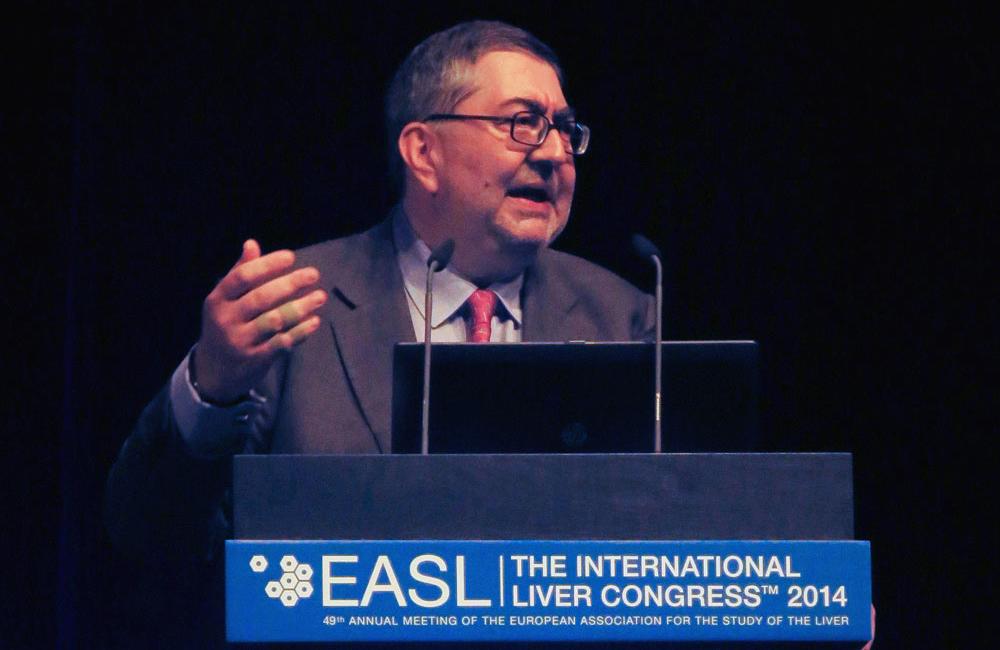 A co-formulation of sofosbuvir and ledipasvir taken for as little as eight to twelve weeks produced high sustained response rates across the board for participants in the phase 3 ION trials, including people with genotype 1 hepatitis C virus (HCV) starting treatment for the first time, prior non-responders and people with liver cirrhosis, according to findings presented last week at the 49th Annual Meeting of the European Association for the Study of the Liver (EASL) in London. Results were also published online in the New England Journal of Medicine.

Sofosbuvir (Sovaldi) is an HCV polymerase inhibitor recently approved in the European Union and the US. Ledipasvir is an NS5A replication complex inhibitor. Phase 2 studies have shown that ledipasvir works better than ribavirin in interferon-free therapy for people with HCV genotype 1. Gilead Sciences is in the final stages of developing a co-formulation of the two drugs taken as a single once-daily pill (400/900mg). The US Food and Drug Administration has granted it priority review status, with a decision expected in mid-October.

The ION studies were open-label, randomised phase 3 clinical trials evaluating the safety and effectiveness of the once-daily sofosbuvir/ledipasvir fixed-dose combination taken for 8, 12 or 24 weeks, either with or without ribavirin. The programme was funded by Gilead.

The primary endpoint for all three trials was sustained virological response, or continued undetectable HCV viral load at 12 weeks after completing therapy (SVR12), which is considered a cure.

ION-1 enrolled 865 people with genotype 1 chronic hepatitis C in Europe and the US who were not previously treated with interferon-based therapy. About 60% were men, 12% were black and the mean age was approximately 52 years. More than two-thirds had harder-to-treat HCV subtype 1a, about 70% had unfavourable IL28B non-CC gene variants and 16% had compensated liver cirrhosis.

Participants were randomly allocated into four groups assigned to receive sofosbuvir/ledipasvir with or without ribavirin for 12 or 24 weeks.

Cure rates were similar for people with HCV subtypes 1a and 1b. There were also no significant differences in SVR12 rates between people with cirrhosis (94 to 100%) and people who do not have cirrhosis (97 to 99%).

Among participants who did not achieve SVR12, there was one on-treatment viral breakthrough – in an individual with unmeasurable blood drug levels suggesting lack of adherence – and two relapses. The rest were lost to follow-up. All three people with virological failure had evidence of NS5A resistance variants. Overall, however, 96% of participants with these variants at baseline still achieved SVR12.

The sofosbuvir/ledipasvir co-formulation was generally safe and well-tolerated. About 4% of patients had treatment-emergent serious adverse events. Ten people in the 24-week arms, but none in the 12-week arms, discontinued early due to adverse events. The most common side-effects were headache (25%), fatigue (23%) and nausea (12%). Anaemia was seen in 8% of participants taking ribavirin but none of those taking sofosbuvir/ledipasvir alone.

"A single tablet regimen of sofosbuvir/ledipasvir administered once daily for 12 weeks is highly effective and well tolerated in treatment-naive, genotype 1, HCV-infected patients, including those with cirrhosis," the ION-1 researchers concluded.

Mangia noted that there was "no benefit observed from adding ribavirin or extending treatment duration to 24 weeks," though doing either led to more adverse events.

Nezam Afdhal of Deaconess Medical Center in Boston presented findings from ION-2, which looked at previously treated patients who did not achieve a cure with prior interferon-based therapy.

This trial included 440 people living with chronic hepatitis C in the US. About 65% were men, about 80% were white and the average age was about 56 years. Nearly 80% had HCV 1a and, as is typical for prior non-responders, most had unfavourable non-CC IL28B variants. One in five (20%) had compensated cirrhosis.

About 45% were prior non-responders who never reached undetectable viral load on prior interferon-based treatment – a harder group to treat than people who relapsed after finishing treatment. Half had failed a previous regimen that included one of the first-generation HCV protease inhibitors – boceprevir (Victrelis) or telaprevir (Incivek or Incivo) – plus pegylated interferon/ribavirin.

Again, participants were randomly assigned to receive the sofosbuvir/ledipasvir coformulation, with or without ribavirin, for either 12 or 24 weeks.

There was a single case of on-treatment viral breakthrough, again in a person with undetectable drug levels. Among the 14% who had resistance-associated variants at baseline, 89% still achieved SVR12.

Out of the 11 participants who relapsed, seven had cirrhosis. Further evaluation of this group did not reveal any specific clinical factors -- such as platelet count or low albumin -- that predicted who would relapse.

Again, the researchers concluded that sofosbuvir/ledipasvir was highly effective for treatment-experienced patients and adding ribavirin or extending treatment duration did not significantly increase the likelihood of a cure.

Asked whether people with cirrhosis should be treated for 12 or 24 weeks, Afdhal noted that among the more than 200 cirrhotic patients in the three ION studies, only 4% relapsed.

"We would have to overtreat 9 out of 10 people to get a benefit for extended treatment," he explained. "It does not make clinical or fiscal sense to overtreat these patients."

Finally, given the high cure rates seen with 12 weeks of treatment, Kris Kowdley of Virginia Mason Medical Center in Seattle and colleagues aimed to determine if an 8-week course might be adequate for first-time treatment, thereby improving convenience and reducing costs.

ION-3 included 647 treatment-naive people with genotype 1 chronic hepatitis C. About 60% were men, about 20% were black and the mean age was 52 years. Most (80%) had HCV 1a and about 75% had non-CC IL28B variants. This study excluded people with cirrhosis, who could be at risk for treatment failure with a shorter regimen.

No virological breakthroughs occurred during treatment. There were 23 relapses, all but three of them in the 8-week treatment arms. Afdhal suggested that people who relapse using a short ribavirin-free regimen could either be retreated with a longer duration or add ribavirin, but there is "no signal about which is better."

Here, too, treatment was well-tolerated. Ten people experienced serious adverse events and three discontinued for this reason. However, none stopped early in the 8-week arm without ribavirin. Use of ribavirin was associated with more side-effects, including anaemia, but there was little difference between the 8-week and 12-week durations of sofosbuvir/ledipasvir alone.

"An 8-week ledipasvir/sofosbuvir treatment regimen is a safe and effective treatment for treatment-naive non-cirrhotic patients with HCV genotype 1 infection", the investigators concluded, adding that "[n]o additional benefit was associated with the inclusion of ribavirin in the regimen or with extension of the duration of treatment to 12 weeks."

The phase 2 ELECTRON trial previously found that shortening treatment with ribavirin-free sofosbuvir/ledipasvir to only 6 weeks led to an unacceptable rate of treatment failure. However, the SYNERGY study showed that adding a third direct-acting antiviral (either GS-9669 or GS-9145) maintained a cure rate of 95-100% with only a month and half of treatment.

In summary, looking at the nearly 2000 participants in all three ION trials combined, the cure rate was 97%. Among the 66 patients (3%) who did not achieve SVR12, there were two on-treatment viral breakthroughs and 36 relapses, with the rest lost to follow-up. The sofosbuvir/ledipasvir co-formulation was well-tolerated. The most common side-effects were fatigue, headache, nausea and insomnia, mostly mild to moderate. Adverse events, including anaemia, were more common among people taking ribavirin.

"The results of the ION studies demonstrated highly satisfactory cure rates with a fixed dose combination of sofosbuvir/ledipasvir among patients with genotype 1 HCV infection without the use of either injectable interferon, which causes miserable flu-like symptoms, or ribavirin, an antiviral pill associated with a variety of troublesome side effects, including anaemia and rash," said EASL Secretary-General Markus Peck-Radosavljevic.

"As a result of this marked improvement in tolerability, many more people are likely to seek treatment with this ribavirin-free regimen, which involves just one pill once a day," he added. "With cure rates well in excess of 90% with as little as 8 weeks of treatment for some patients, these data represent a significant advance in the race to develop a new, all-oral treatment for hepatitis C."

Mangia A et al. All oral fixed-dose combination sofosbuvir/ledipasvir with or without ribavirin for 12 or 24 weeks in treatment-naive genotype 1 HCV-infected patients: the phase 3 ION-1 study. 49th Annual Meeting of the European Association for the Study of the Liver, abstract O164, London, 2014.

Afdhal N et al. Osinusi A et al. All oral fixed-dose combination sofosbuvir/ledipasvir with or without ribavirin for 12 or 24 weeks in treatment- experienced genotype 1 HCV-infected patients: the phase 3 ION-2 study. 49th Annual Meeting of the European Association for the Study of the Liver, abstract O109, London, 2014.

Kowdley K et al. Sofosbuvir/ledipasvir with and without ribavirin for 8 weeks compared to sofosbuvir/ledipasvir for 12 weeks in treatment-naive non-cirrhotic genotype-1 HCV-infected patients: the phase 3 ION-3 study. 49th Annual Meeting of the European Association for the Study of the Liver, abstract O56, London, 2014.

European Association for the Study of the Liver.  Impressive SVR12 data for once-daily combination of sofosbuvir and ledipasvir to treat HCV genotype 1. Press release. April 12, 2014.