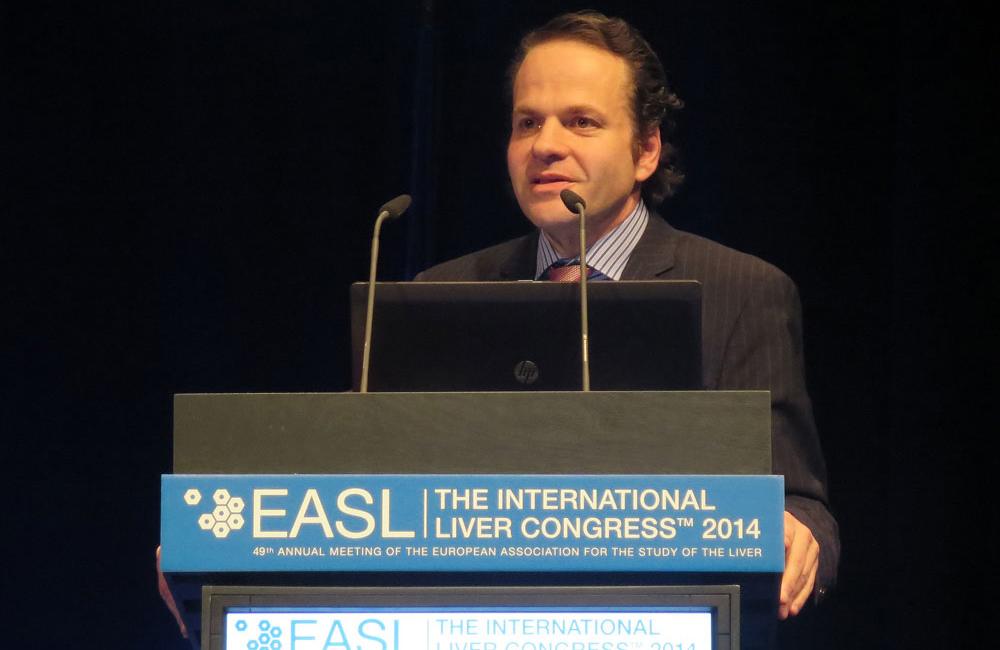 Eric Lawitz of Texas Liver Institute presents results of the COSMOS study. Photo by Liz Highleyman, hivandhepatitis.com
This article is more than 8 years old. Click here for more recent articles on this topic

A 12-week oral regimen of sofosbuvir (Sovaldi) plus simeprevir (Olysio) without pegylated interferon or ribavirin led to sustained virological response in 93% of people with genotype 1 hepatitis C virus (HCV) with either absent to moderate liver fibrosis or with advanced fibrosis or cirrhosis, according to data from the COSMOS trial presented last week at the 49th Annual Meeting of the European Association for the Study of the Liver (EASL) in London.

Researchers are still learning about predictors of response to direct-acting antivirals for hepatitis C, but some of the traditional factors that predicted good response to interferon no longer play a major role, and some may become unimportant.

The phase 2a COSMOS trial enrolled two cohorts of people with genotype 1 chronic hepatitis C traditionally considered hard to treat. Cohort 1 included 80 prior null responders – people who saw little or no drop in HCV RNA with previous interferon-based therapy – who had absent to moderate fibrosis. Cohort 2 included 87 previously untreated patients and prior null responders with advanced fibrosis or compensated cirrhosis.

In this open-label study, participants were randomly assigned to receive sofosbuvir (150mg once daily) plus simeprevir (400mg once daily), taken either with or without weight-based ribavirin, for either 12 or 24 weeks.

Although the drugs' official indications do not include use together in interferon-free regimens, recent guidelines issued by both European (EASL) and US (AASLD/IDSA/IAS-USA) liver disease experts recommend this combination for people with HCV genotypes 1 or 4 who are unable or unwilling to take interferon.

Mark Sulkowski of Johns Hopkins presented findings from a sub-analysis of cohort 1, looking at the effect of predictive factors including HCV subtype 1a vs 1b, presence of viral resistance mutations, patients' IL28B status and fibrosis stage.

About 60% of cohort 1 participants were men, 71% were white, 29% were black and the median age was 56 years. Approximately three-quarters had harder-to-treat subtype 1a and 39% of these had the Q80K resistance variant at baseline. As is typical of null responders, most (94%) had unfavourable IL28B non-CC patterns associated with poor interferon responsiveness. About 40% had absent (Metavir stage F0) or mild (stage F1) fibrosis and 60% had moderate fibrosis (stage F2).

As previously reported at last year's American Association for the Study of Liver Diseases (AASLD) Liver Meeting, 93% of participants taking simeprevir/sofosbuvir alone and 96% taking simeprevir/sofosbuvir plus ribavirin for 12 weeks achieved sustained virological response 12 weeks after finishing treatment (SVR12). Among those treated for 24 weeks, SVR12 rates were 93 and 79%, respectively.

There was one relapser in each of the 12-week arms and one in the 24-week triple therapy arm. Sulkowski presented stratified data excluding a small number of participants with 'non-virological failures' such as loss to follow-up.

Looking at the effect of HCV subtype, all participants with genotype 1b achieved SVR12 in all treatment arms, as did 100% of those with genotype 1a lacking the Q80K resistance variant. Among genotype 1a patients with pre-existing Q180K, SVR12 rates were 83 to 89%.

Turning to IL28B status, everyone in all treatment arms with either the most favourable CC variant or the intermediate CT variant achieved SVR12. Among those with the least favourable TT variant, the overall cure rate was 83%, falling to 67% among those assigned to 12-week dual therapy.

Looking at fibrosis stage, cure rates were high across the board, with 97% of people with stage F0-F1 and 96% with stage F2 achieving SVR12. There were no notable differences according to dual vs triple therapy or 12 vs 24 weeks duration.

Rapid virological response (RVR), or reaching undetectable HCV RNA by week 4 of treatment, is a strong predictor of sustained response when using interferon-based therapy. Here, 76% of participants overall experienced RVR, of whom 95% went on to achieve SVR12 – but so did 100% of patients without RVR. People taking dual therapy did appear to have a slower initial response than those who added ribavirin, with RVR rates of 57 to 69% vs 80 to 85% with triple therapy.

"SVR12 rates were high regardless of baseline characteristics," the researchers concluded. "On-treatment virological response, including RVR, was not predictive of SVR."

Eric Lawitz of the University of Texas Health Science Center presented late-breaking findings from COSMOS cohort 2. As people with advanced fibrosis or cirrhosis are at greater risk for treatment failure, this cohort was started later, after investigators saw high response rates in cohort 1.

About two-thirds of cohort 2 participants were men, 91% were white, 9% were black and the median age was 58 years. (People over age 70 were excluded, but Lawitz said he would not do this again in the future.) Again, 78% had subtype 1a, 40% with the Q80K mutation. About half were prior null responders and 79% had unfavourable non-CC IL28B variants. Just over half had advanced fibrosis (stage F3) and 47% had compensated cirrhosis (stage F4).

Sustained response rates in cohort 2 were similar to those of people with less advanced liver disease in cohort 1: 93% of participants assigned to simeprevir/sofosbuvir either alone or with ribavirin for 12 weeks achieved SVR12. Among those treated for 24 weeks, SVR12 rates were 93 and 100%, respectively.

Everyone treated for 24 weeks was cured regardless of HCV subtype. In the 12-week treatment arms, two genotype 1a patients without the Q80K mutation and one with the mutation relapsed. Two people (both in the 24-week triple therapy arm) had 'non-virological failure'. People with all IL28B variants had SVR12 rates greater than 90%, with no clear pattern.

Looking at the influence of liver damage, overall SVR12 rates were 98% for people with advanced fibrosis and 95% for those with cirrhosis. Again everyone treated for 24 weeks was cured. Two of the three relapsers had cirrhosis – one a prior null responder, the other treatment-naive – but numbers were too small to be statistically meaningful. All three relapsers were treated for 12 weeks, two with and one without ribavirin.

Treatment was generally safe and well-tolerated even for people with advanced liver disease. There were four serious adverse events and one discontinuation for this reason. The most common side-effects were fatigue, headache and nausea. Thirteen per cent developed anaemia, all but one in the ribavirin-containing arms.

Again, the researchers concluded that SVR12 rates were high regardless of baseline characteristics, and that extent of liver fibrosis/cirrhosis and prior treatment history did not play a role.

Given that ribavirin adds side-effects but did not appear to improve efficacy, two phase 3 trials testing sofosbuvir/simeprevir alone – OPTIMIST-1 for people who do not have liver cirrhosis and OPTIMIST-2 for people with cirrhosis – are now recruiting. As 12 weeks of treatment was highly effective in COSMOS, the new studies will compare 8 vs 12 weeks to see if treatment can safely be shortened to two months.

Sulkowski M, Mangia A et al. Once-daily simeprevir (TMC435) plus sofosbuvir (GS-7977) with or without ribavirin in HCV genotype 1 prior null responders with Metavir F0-2: COSMOS study subgroup analysis. 49th Annual Meeting of the European Association for the Study of the Liver, abstract O7, London, 2014.

Janssen. Final Data from the Phase 2 COSMOS Study of Janssen’s Once-Daily Simeprevir in Combination with Sofosbuvir Presented at the International Liver Congress 2014 of the European Association for the Study of the Liver (EASL). Press release. April 12, 2014.