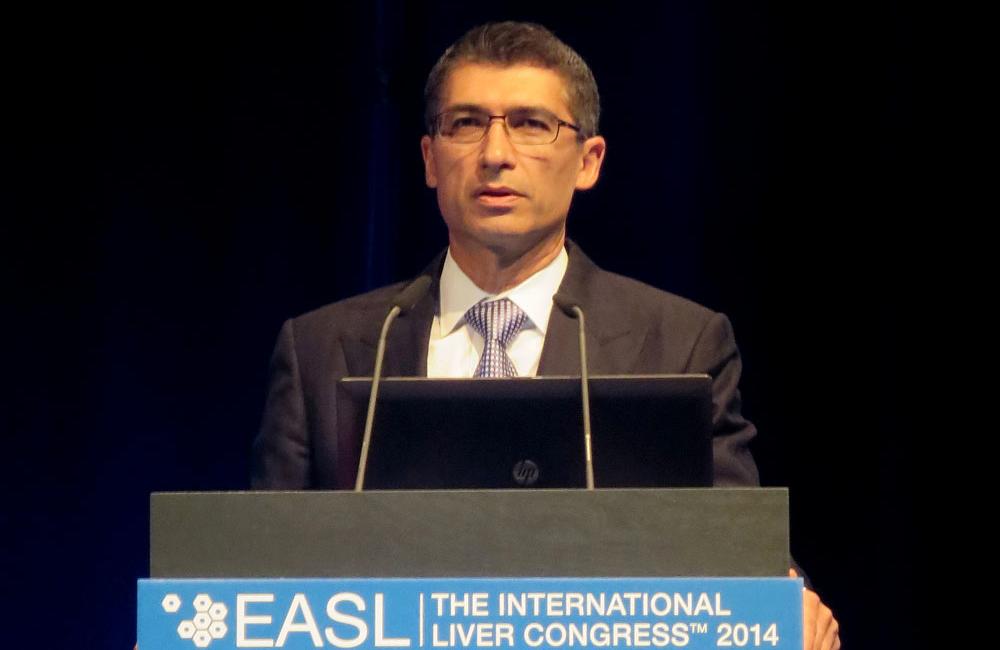 Professor Fred Poordad, of the Texas Liver Institute at the University of Texas, speaking at the International Liver Congress 2014. Photo by Liz Highleyman, hivandhepatitis.com.
This article is more than 8 years old. Click here for more recent articles on this topic

The largest study of new direct-acting antivirals yet conducted in people with hepatitis C genotype 1 who have compensated cirrhosis has shown that it is possible to cure between 92 and 96% of people with cirrhosis, regardless of previous treatment history, within 12 to 24 weeks, according to results of the TURQUOISE-II study presented at the 49th Annual Meeting of the European Association for the Study of the Liver (EASL) on 11 April in London.

The TURQUOISE-II study evaluated a regimen of three direct-acting antivirals developed by AbbVie. The investigational therapy consisted of the protease inhibitor ABT450 with ritonavir booster (150mg/100mg once daily), the NS5A inhibitor ombitasvir (ABT-267) (250mg once daily) and the non-nucleoside NS5B polymerase inhibitor dasabuvir (ABT-333) (250mg twice daily), and ribavirin.

This regimen was also evaluated in treatment-experienced patients with genotype 1 infection. The results of that study, SAPPHIRE II, were reported on the opening day of the congress.

Historically, people with hepatitis C whose liver disease has progressed to cirrhosis have responded less well to interferon-based regimens. New, interferon-free regimens are being tested in a wide range of patient populations, and have displayed very high cure rates. People with cirrhosis have been under-represented in earlier studies, despite forming one of the highest-priority populations for hepatitis C treatment. People with compensated cirrhosis are at high risk of progression to decompensated liver disease and require a high level of medical management even when liver function is being maintained in the compensated state. Antiviral treatment that can cure hepatitis C infection may halt further liver damage and permit some regression in liver disease, improving life expectancy for this patient group.

The study enrolled 380 patients at 78 sites in Europe and North America. Participants were randomised to receive 12 or 24 weeks of treatment. The primary endpoint of the study was sustained virological response 12 weeks after the conclusion of treatment (SVR 12), considered to be a cure of hepatitis C infection.

The primary analysis showed no significant difference in treatment outcome according to the length of treatment. In the 12-week treatment group, 91.8% of participants achieved SVR12 compared to 95.9% of the 24-week treatment group (p = 0.89). Patients with genotype 1a infection were marginally less likely to achieve SVR12 than those with genotype 1b infection (88.6 vs 98.5% in the 12-week arm, 94.2 vs 100% in the 24-week arm).

Analysis by indicators of severity of liver disease (portal hypertension and hepatic function) showed that patients with lower baseline serum albumin (<35 g/L) tended to have slightly poorer responses regardless of duration of therapy (84 and 88.9% in the 12- and 24-week arms, compared to 92.9 and 96.8% respectively in those with serum albumin >35 g/l). Responses were also somewhat poorer in those with baseline platelet counts <100 who received treatment for 12 weeks compared to the 24-week group (88.9 vs 97%).

A total of 17 people experienced virologic failure during or after treatment. Virologic failure during treatment was rare (1 in the 12-week arm and 3 in the 24-week arm) but the proportion of participants who experienced viral relapse after the completion of treatment was significantly higher in the 12-week arm (5.9% vs 0.6%). Seven of the twelve relapses in this arm occurred in people with genotype 1a who had been null responders to previous treatment.

Treatment was well-tolerated; 1.9% of the 12-week arm and 2.3% of the 24-week arm discontinued treatment due to a serious adverse event. The nature of these events was unspecified. The most common adverse events were fatigue, headache and nausea. 8.9% of patients required a ribavirin dose reduction due to anaemia, but all patients who underwent dose reduction achieved SVR12.

Four cases of hepatic decompensation occurred during the study but none were considered related to the study treatment.

Transient increases in ALT and bilirubin were observed more frequently in the 12-week arm, but in all cases these elevations were transient and did not result in treatment discontinuation.

Presenting the results, Professor Fred Poordad of the Texas Liver Institute at the University of Texas concluded that there was no statistical difference in cure rates between patients treated for 12 or 24 weeks, and that the duration of treatment required was likely to be a matter of clinical judgement based on the individual characteristics of the patient.