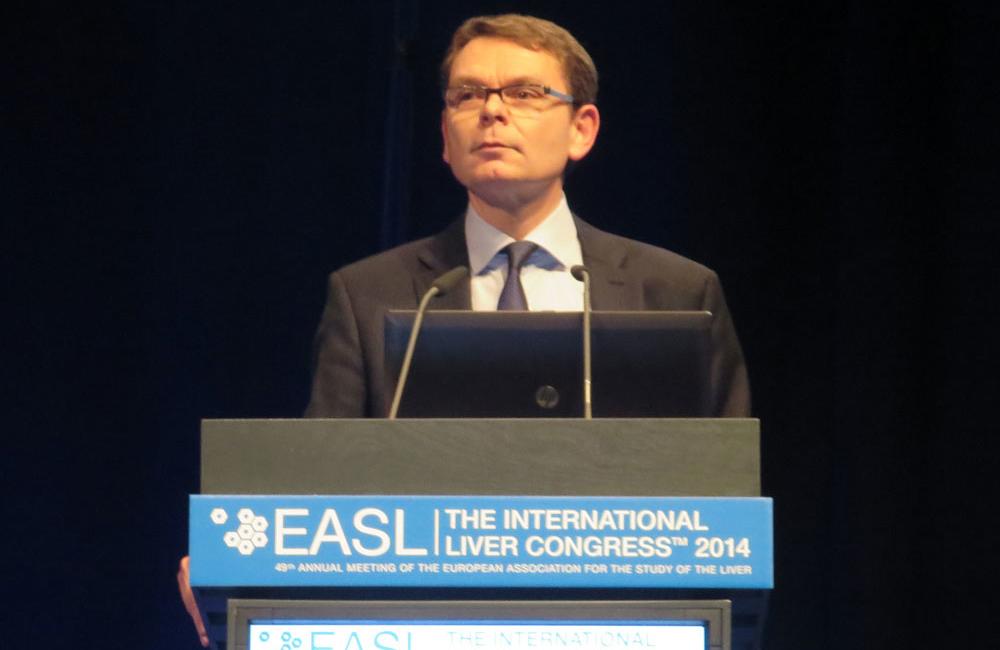 Christophe Hézode speaking at the International Liver Congress 2014. Photo by Liz Highleyman, hivandhepatitis.com.
This article is more than 8 years old. Click here for more recent articles on this topic

A combination of two direct-acting antivirals developed by AbbVie cured 100% of previously untreated patients with hepatitis C genotype 4 infection when used with ribavirin, Christophe Hézode reported on Friday at the 49th Annual Meeting of the European Association for the Study of the Liver (EASL) in London.

Genotype 4 infection has been considered hard to treat compared to genotypes 2 and 3. Not all direct-acting antivirals are active against genotype 4, or else they have been tested in very small populations.

The PEARL-1 study examined the safety and efficacy of the protease inhibitor ABT-450 and ritonavir booster (150/100mg once daily), in combination with the NS5A inhibitor ombitasvir ABT-267 (250mg once daily) with or without ribavirin. (AbbVie is also developing these agents as part of a three-drug combnation that also includes the non-nucleoside NS5B polymerase inhibitor dasabuvir [ABT-333], which is not active against genotype 4.)

The study population comprised previously untreated and treatment-experienced people with HCV genotype 4, who did not have cirrhosis.

All study participants received treatment for twelve weeks. People who had not taken treatment before were randomised to receive therapy without (n = 43) or with (n = 42) ribavirin. The treatment-experienced patients (n = 49) all received ribavirin.

No participant in the study stopped treatment due to side-effects and the only serious adverse event occurred as a result of a car accident unrelated to treatment. The most common side-effects were tiredness and headache. Three patients in the treatment-experienced arm had transient elevations in bilirubin, and four patients experienced haemoglobin declines (one in the ribavirin-sparing arm). None required a ribavirin dose reduction.

Hezode C et al. Results from the phase 2 PEARL-1 study: interferon-free regimens of ABT-450/R + ABT-267 with or without ribavirin in patients with HCV genotype 4 infection. 49th Annual Meeting of the European Association for the Study of the Liver (EASL), abstract 58, London, 2014.