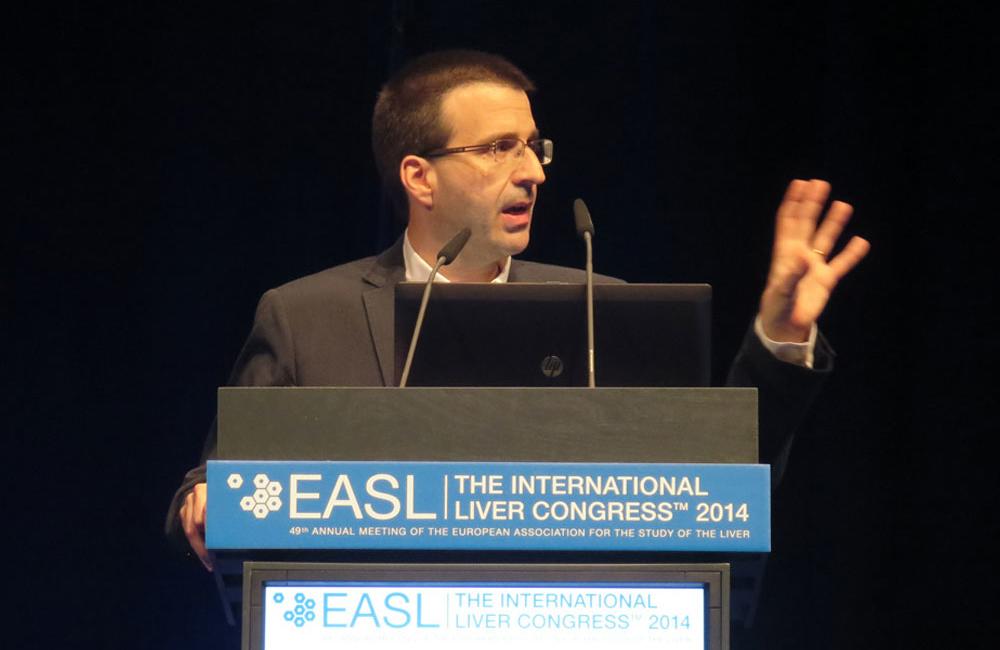 Xavier Forns speaking at the International Liver Congress 2014. Photo by Liz Highleyman, hivandhepatitis.com.
This article is more than 8 years old. Click here for more recent articles on this topic

Almost 90% of European patients who had relapsed after previous treatment with pegylated interferon and ribavirin were cured of hepatitis C after 24 weeks of treatment with the protease inhibitor simeprevir (Olysio) combined with pegylated interferon and ribavirin, the 49th Annual Meeting of the European Association for the Study of the Liver (EASL) heard on Thursday in London.

Simeprevir is a second-generation HCV protease inhibitor that is better tolerated than the first-generation protease inhibitors telaprevir (Incivo) and boceprevir (Victrelis). Simeprevir received marketing approval in the United States in November 2013 and a positive scientific opinion from the European Medicines Agency in March 2014. The European Medicines Agency is expected to grant European Union marketing approval for simeprevir in May 2014.

The data presented on the responses of European patients are derived from the PROMISE study, a randomised comparison of simeprevir or placebo, combined with pegylated interferon or ribavirin. The international study evaluated simeprevir-based triple therapy in treatment-experienced patients with hepatitis C virus (HCV) genotype 1. Results of the study were first released in May 2013.

PROMISE recruited patients in both North America (30%) and Europe (70%). An analysis of European study participants was carried out in order to determine the efficacy of simeprevir in a patient population with a very low prevalence of genotype 1a virus that carries the Q80K polymorphism. This naturally occurring variation in the virus reduces the efficacy of simeprevir, and was present in 48% of US patients with genotype 1a infection who participated in phase II studies of simeprevir. In contrast, only 5.5% of European participants in the PROMISE study who had genotype 1a infection had the Q80K polymorphism.

The US Food and Drug Administration has recommended that all patients with genotype 1a infection should be tested for the Q80K polymorphism to determine whether simeprevir treatment will be suitable.

A total of 393 people were recruited to this randomised, double-blind, placebo-controlled phase III study. All the participants had HCV genotype 1 and had relapsed after dual therapy with pegylated interferon/ribavirin.

The primary outcome was sustained virological response twelve weeks after the completion of treatment (SVR12).

Overall, 79% of participants in the PROMISE study receiving simeprevir achieved SVR12 compared to 36% of those in the placebo arm. Restricting analysis to European patients showed that SVR rates were 88% and 43% in the treatment and control arms, respectively.

Further analysis was restricted to the European participants taking simeprevir. Most (94%) were eligible for 24-weeks treatment with pegylated interferon/ribavirin and 91% achieved SVR12.

Impressive outcomes were observed among participants with stage F3 and F4 fibrosis who made up 28.7% of participants. Of these participants, 87% and 85% respectively achieved SVR12, compared with 88% of those with F0-F2 fibrosis.

There was no significant difference between the people taking simeprevir and the placebo group in the proportion of patients who experienced grade 3 or 4 serious adverse events. The majority of side-effects (80%) were mild to moderate. The most common adverse events were fatigue, headache and flu-like illness. Rash (20.7 vs 15.6%) and photosensitivity (4.3 vs 0%) occurred more frequently in people taking simeprevir, as did influenza-like illness (29.9 vs 20%).

Forns X et al. Simeprevir (TMC435) with peginterferon/ribavirin for treatment of chronic HCV genotype 1 infection in European patients who relapsed after previous interferon-based therapy: the Promise Trial. 49th Annual Meeting of the European Association for the Study of the Liver (EASL), abstract 13, London, 2014.