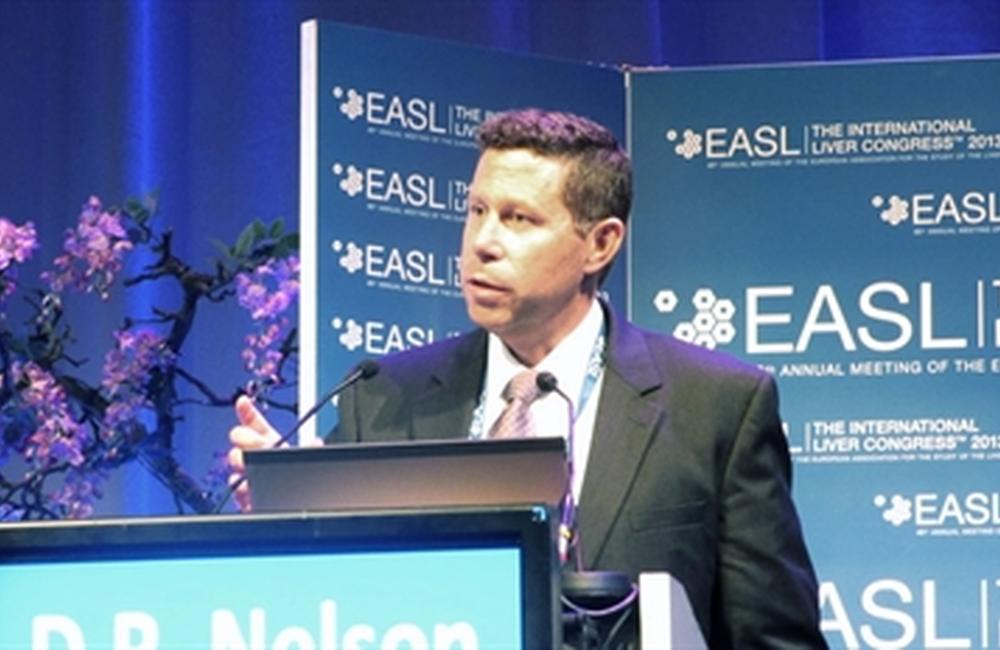 The advent of direct-acting antivirals has changed the treatment paradigm for chronic hepatitis C (HCV), but many people with HCV and clinicians continue to await all-oral regimens that avoid interferon and its difficult side-effects.

Gilead Science's sofosbuvir (formerly GS-7977) is a once-daily nucleotide analogue that targets the HCV NS5B polymerase. Studies have shown that it has potent antiviral activity, a high barrier to resistance, and is generally safe and well tolerated.

A simple, short-duration regimen of sofosbuvir plus weight-based ribavirin was evaluated in people with HCV genotypes 2 or 3, traditionally considered 'easier to treat'.

Edward Gane from Auckland City Hospital in New Zealand presented final results from the phase 3 FISSION trial, looking at a 12-week regimen in people who had not taken treatment before (treatment naive). David Nelson from the University of Florida College of Medicine followed with findings from the FUSION trial, comparing the oral regimen for 12 or 16 weeks in people who were not cured with prior interferon-based therapy.

As Gane first reported at the 2011 AASLD Liver Meeting, 12 weeks of sofosbuvir (then known as PSI-7977) plus ribavirin cured 100% of previously untreated genotype 2 or 3 patients without liver cirrhosis in the smaller phase 2 ELECTRON trial.

The 12-week post-treatment sustained virological response (SVR12) rate fell to 68% for treatment-experienced patients, however, prompting phase 3 researchers to test an additional month of dual therapy. Further analysis of newly added ELECTRON arms showed that sofosbuvir plus ribavirin was not adequate for people with HCV genotype 1, especially prior null responders, who had an SVR12rate of just 10%.

The FISSION trial enrolled 499 people with genotype 2 or 3 chronic hepatitis C. Two-thirds were men, most were white and the mean age was 48 years. Just over 70% had genotype 3 and about 43% had the favourable IL28B 'CC' gene pattern. Participants reflected a 'real-world' population: the average body mass index was high (28), 20% had compensated cirrhosis and use of opiate substitution for injecting drug users was permitted.

Participants were randomly assigned to receive either 400mg once-daily sofosbuvir plus 1000 to 1200mg/day weight-based ribavirin for 12 weeks, or the standard-of-care (SoC) regimen of 180mcg/week pegylated interferon plus 800mg/day fixed-dose ribavirin for 24 weeks.

As seen in previous studies, sofosbuvir/ribavirin induced a rapid decrease in viral load, with 99% achieving rapid virological response at week 4 of therapy (vs 67% in the SoC arm) and the same proportion remaining undetectable at the end of treatment (99% also in the SoC arm).

Treatment failure rates were similar, resulting in SVR12 rates of 67% in both arms. Post-treatment relapse happened more often in the sofosbuvir/ribavirin arm, whilst viral breakthrough on therapy was more common amongst SoC recipients. No resistance was detected amongst people who experienced virological failure.

The difference was even more pronounced amongst participants with cirrhosis. Genotype 2 patients had high sustained response rates whether they had cirrhosis or not, at 91 and 98%, respectively. But amongst those with genotype 3, only 34% of people with cirrhosis were cured, compared to 61% without cirrhosis.

Turning to safety and tolerability, there were fewer side-effects overall (86 vs 96%), grade 3 or higher adverse events (7 vs 19%) and discontinuations for this reason (1 vs 11%) in the sofosbuvir/ribavirin arm than in the interferon-containing arm. Anaemia was more common amongst interferon recipients even though they used a lower ribavirin dose. No specific side-effects were reported more often in the sofosbuvir-containing arm.

The researchers concluded that sofosbuvir plus ribavirin for 12 weeks was well tolerated and met the criteria for non-inferiority to the standard 24-week pegylated interferon plus ribavirin regimen.

After his presentation, Gane was asked if he was disappointed in these findings, given the high sustained response rates for genotype 2 and 3 patients in the ELECTRON trial. He replied that he was "disappointed but not surprised", given that ELECTRON was a smaller study that did not include people with cirrhosis.

The FUSION study enrolled 201 genotype 2 or 3 patients who had previously attempted interferon-based therapy. Again, most were white men and the mean age was 54 years. About 63% had genotype 3, one-third had cirrhosis, 30% had IL28B 'CC' and three-quarters were prior post-treatment relapsers – considered more promising candidates for re-treatment than prior null responders.

Participants were randomised to receive 400mg once-daily sofosbuvir plus 1000 to 1200mg/day weight-based ribavirin for either 12 or 16 weeks. They were also compared against an historical control SVR rate of 25% for similar patients using interferon-based therapy.

As in FISSION, viral decline was dramatic and rapid, with 97 to 98% achieving undetectable viral load at week 4 and 100% at the end of either 12 or 16 weeks of treatment.

But relapse was common after completing therapy – usually within 4 weeks, resulting in SVR12 rates of just 50% for people taking the 12-week oral regimen and 73% for those treated for 16 weeks.

In this study, unlike FUSION, cirrhosis negatively affected response rates for both genotype 2 and 3 patients. Whilst 96 and 100% of non-cirrhotic genotype 2 patients treated for 12 and 16 weeks achieved SVR12, corresponding rates fell to 60 and 78%, respectively, for those with cirrhosis. Amongst people with genotype 3, the non-cirrhotic SVR12 rates for 12 and 16 weeks were 37 and 63%, falling to 19 and 61% for cirrhotics.

In other words, 12-week treatment cured 37% of genotype 3 non-cirrhotics and 19% of cirrhotics, though the 16-week regimen worked about the same for both subgroups. For people with genotype 3 overall, longer treatment doubled the response rate, but among cirrhotics, the rate tripled, Nelson summarised.

Here again, side-effects were common overall but serious adverse events and discontinuations for this reason were rare across the board. There were no notable differences in frequency of any side-effect between the 12-week and 16-week groups, indicating that the extra 4 weeks of therapy had "no significant negative impact".

The investigators concluded that sofosbuvir plus ribavirin "provided a simple, well tolerated, interferon-free regimen" for treatment-experienced patients with genotype 2 or 3 HCV infection. Whilst genotype 2 patients had high SVR rates with either 12 or 16 weeks of therapy, extending treatment duration to 16 weeks "significantly increased SVR rates" in genotype 3 patients, particularly those with cirrhosis.

Nelson said that he would feel comfortable treating genotype 2 patients with this regimen for 12 weeks, though he would like more data for cirrhotics. For those with genotype 3, however, "16 weeks is a bare minimum", and an ongoing study is looking at whether 24 weeks might be better. Unfortunately, he added, the data revealed no on-treatment predictors of which patients are likely to relapse.

The FUSION results were published in the April 23 2013, advance online edition of the New England Journal of Medicine, released to coincide with the conference. The same article also described findings from POSITRON, a phase 3 placebo-controlled trial of sofosbuvir plus ribavirin for genotype 2 or 3 patients who were "ineligible, intolerant or unwilling" to take interferon. In this study, SVR12 rates were 93% for patients with genotype 2 and 61% for those with genotype 3.

Genotype 2 vs 3: apples and oranges?

In early April, Gilead submitted a New Drug Application asking the US Food and Drug Administration to approve sofosbuvir as part of all-oral therapy for people with genotypes 2 or 3, and as an add-on to pegylated interferon/ribavirin for patients with genotypes 1, 4, 5 or 6.

But the latest results call into question the traditional classification of HCV genotypes as 'easy' or 'difficult' to treat.

Session chair and EASL Secretary General Mark Thursz brought up the issue of whether patients with genotypes 2 and 3 should continue to be "lumped together" in clinical trials and practice guidelines.

Gane responded that they clearly should not, as genotype 3 is "behaving as a harder-to-treat virus", especially when using single direct-acting antivirals.

The divergence in response between genotypes 2 and 3 is similar to the disparity that has emerged over the past couple of years between HCV subtypes 1a and 1b. Viral variants that were assumed to be similar when only interferon was available have proven to be quite different in their response to new direct-acting agents, leaving researchers scrambling to re-stratify their data to take this effect into account.

Jacobson I et al. Sofosbuvir for hepatitis C genotype 2 or 3 in patients without treatment options. New England Journal of Medicine. April 23, 2013 (epub ahead of print).