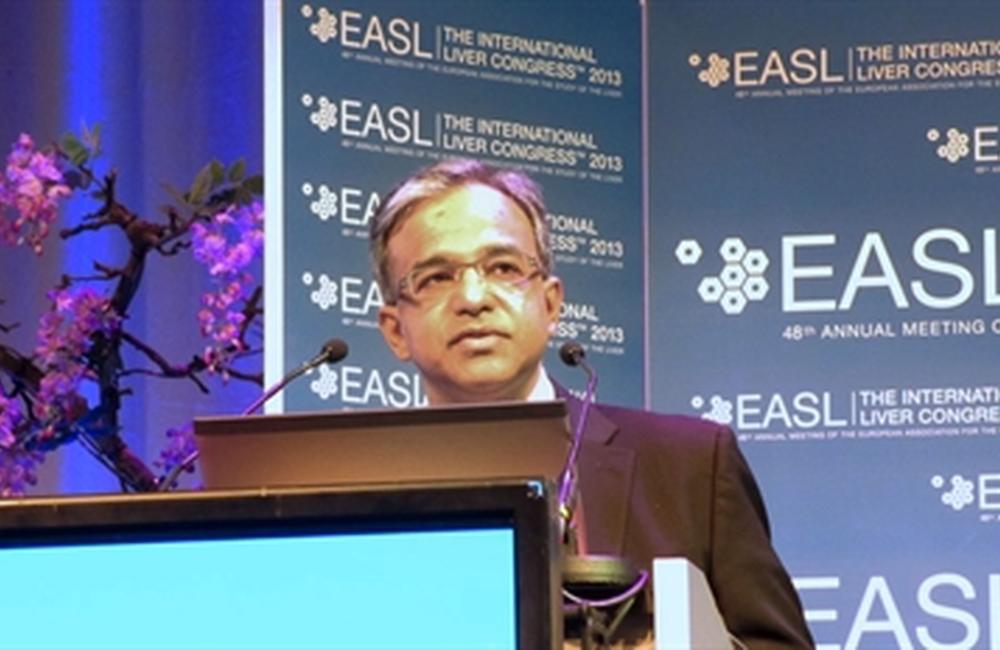 A four-drug combination of direct acting antivirals developed by AbbVie cured hepatitis C infection in over 90% of participants in the AVIATOR study, without the need for the use of interferon, researchers reported at the 48th International Liver Congress 2013 (EASL) on Thursday in Amsterdam.

The preliminary presentation to that meeting showed that between 79 and 96% of previously untreated patients with genotype 1a HCV infection achieved a sustained virologic response (an undetectable viral load 12 weeks after completing treatment, or SVR12), depending on the duration of treatment and regimen to which they had been randomised. In previously untreated patients with genotype 1b infection 96 to 100% of patients achieved SVR12. In previously treated null responders 81 to 89% of genotype 1a patients and 100% of genotype 1b patients achieved SVR12.

At the International Liver Congress this week, Kris Kowdley of Virginia Mason Medical Center, Seattle, presented 24-week post-treatment follow-up data (SVR24) on 571 patients, showing very few cases of viral breakthrough or relapse between weeks 12 and 24 post-treatment. Three patients are reported to have experienced relapse during this period, while a further eight have still to return for follow up after week 12, and are counted as virologic failures in their absence.

The study compared combinations of:

By intent-to-treat analysis in which all patients randomised to any of the study regimens were counted, regardless of whether they completed the treatment course or not, 96% of treatment-naïve patients and 93% of prior null responders achieved SVR24. One case of virologic relapse occurred in a patient who received this regimen, two weeks after completing treatment, and no cases of relapse occurred after week 12 in patients receiving this regimen.

Sub-genotype was the baseline characteristic which had the most pronounced impact on the likelihood of achieving SVR24 in treatment-naive patients. There was almost no difference in SVR24 rates by gender or by stage of liver disease, but patients with baseline viral load below 7 log showed a trend towards higher rates of cure among both treatment-naive (94 vs 89%) and prior null responders (96 vs 91%).

However, any differences according to baseline characteristics need to be treated with caution because in the cases of baseline viral load and IL28B status the numbers of patients available for comparison are small. Similarly, the exclusion of cirrhotic patients from this study makes it premature to draw conclusions about the efficacy and safety of the study regimens in patients with the most advanced liver disease.

Dr Kowdley told the conference: “The incremental gain of treating from 12 to 24 weeks is small; 12 weeks of treatment seems quite satisfactory.”

Based on the results of the Aviator study, AbbVie has selected a 12-week regimen of all three investigational drugs plus ribavirin for further study in phase III licensing trials.

Treatment was well tolerated by most patients; only 2.4% of 247 patients with available safety data discontinued treatment due to adverse events, and four out of six discontinuations were judged to be due to the study drugs. The most common side-effects were headache (31.2%), fatigue (29.6%) and nausea (22.7%), but these were mild in most cases and did not lead to treatment discontinuation.

No grade 3 or 4 cases of anaemia were observed. Six of 247 patients developed bilirubin elevations between three and ten times above the upper limit of normal but these were not treatment-limiting, and all resolved spontaneously.

Kowdley K et al. Safety and efficacy of interferon-free regimens of ABT-450/r, ABT-267 and ABT-33 +/- ribavirin in patients with chronic genotype 1 infection: results from the Aviator study. 48th International Liver Congress, Amsterdam, abstract 3, 2013.