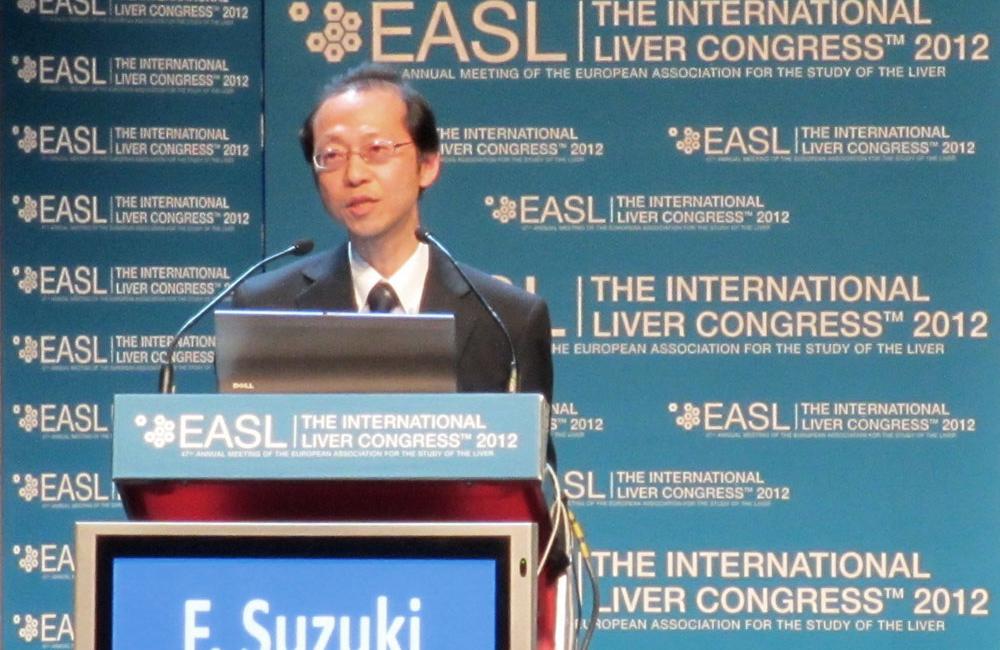 Fumitaka Suzuki presenting at the International Liver Congress 2012. Photo by Liz Highleyman / aidsmap.com
This article is more than 10 years old. Click here for more recent articles on this topic

Most previously untreated people with chronic hepatitis C achieved an early cure with an all-oral combination of the HCV NS5A inhibitor daclatasvir plus the polymerase inhibitor GS-7977, researchers reported on Thursday at the 47th International Liver Congress (EASL 2012) in Barcelona. Another study confirmed that daclatasvir plus the HCV protease inhibitor asunaprevir produced a long-term cure for 77% of difficult-to-treat patients.

Last year's approval of the first direct-acting antiviral agents for hepatitis C ushered in a new era of treatment, but many patients and clinicians await all-oral regimens that do not include interferon. Several interferon-free regimens are currently under study; these resemble antiretroviral therapy for HIV, combining drugs that target different steps of the viral lifecycle.

Mark Sulkowski from Johns Hopkins Medical School in Baltimore and colleagues tested various oral combinations of daclatasvir (formerly BMS-790052) plus GS-7977, with or without ribavirin, in an open-label phase 2a trial (AI-444040).

The study included 88 treatment-naive participants, half with difficult-to-treat hepatitis C virus (HCV) genotype 1a or 1b and half with genotype 2 or 3. Participants, divided by genotype (1 vs 2/3), were randomly assigned to receive one of three regimens, for a total of six study arms:

Across all study arms about half of participants were men, about 80% were white and the median age was about 52 years. Among genotype 1 patients, 73% had 1a and 27% had 1b; among the rest, 59% had genotype 2 and 41% had genotype 3. Proportions of participants with the favourable IL28B "CC" gene pattern ranged from 27% to 57%. People with liver cirrhosis or HIV co-infection were excluded.

Dr Sulkowski reported interim sustained virological response rates at four weeks after completion of treatment, known as SVR4. The study will continue to evaluate participants to see how many maintain undetectable viral load at 12 weeks after the end of treatment (SVR12), which is considered a cure.

At the end of treatment, 87% of people taking the GS-7977 lead-in regimen, 86% taking the dual combination for 24 weeks and 93% taking the triple combination achieved undetectable HCV viral load. Even after finishing treatment a few patients achieved further viral suppression, resulting in SVR4 rates of 100% in all three arms.

Turning to the genotype 2/3 group, early viral suppression was also good with RVR rates ranging from 64 to 88%. End-of-treatment response rates were 93% for people taking the GS-7977 lead-in regimen, 93% for those taking the dual combination for 24 weeks and 86% of those taking the triple combination.

SVR4 rates were 88%, 100% and 79%, respectively. Ribavirin – which is known to help prevent relapse – did not improve response rates at this early post-treatment time point, but further follow-up is needed to determine if SVR4 predicts long-term cure.

Safety and tolerability were assessed through week 12 of treatment. The combination was "generally well tolerated", the researchers summarised.

The most common side-effects were fatigue, nausea and headache. Two people (6%) in the GS-7977 lead-in group, five (18%) in the dual combination group and three (10%) in the triple combination group experienced serious adverse events, and one person each in the latter two arms stopped treatment early for this reason. Serious laboratory abnormalities, including anaemia, were only seen in the group that took ribavirin.

Overall, in this first report of data on an interferon-free regimen containing an NS5A inhibitor plus an NS5B nucleotide polymerase inhibitor, the combination of daclatasvir plus GS-7977 cured more than 95% of genotype 1, 2 and 3 treatment-naive patients, including all of those with genotype 1, the researchers concluded.

"Ribavirin contributed adverse effects but had no effect on virologic response", they added. Further, sustained response rates were independent of IL28B gene pattern, which affects response to interferon.

These findings were discussed at an opening press conference, where it was noted that daclatasvir developer Bristol-Myers Squibb and GS-7977 developer Gilead Sciences do not currently have plans to further test this regimen in phase 3 studies. Gilead is testing GS-7977 in combination with several of its own compounds.

Another study presented on Thursday provided further data on the combination of daclatasvir plus asunaprevir (formerly BMS-650032). This regimen was previously shown to be effective in small early studies of a difficult-to-treat population, genotype 1 patients with 'null response' to prior interferon-based therapy. Results were especially promising for people with genotype 1b.

Fumitaka Suzuki from Toranomon Hospital in Tokyo and colleagues provided further data on 60mg once-daily daclatasvir plus 200mg twice-daily asunaprevir for 24 weeks in 21 prior interferon null responders and 22 people who were ineligible for or intolerant of pegylated interferon/ribavirin.

Participants were older on average (median age about 65 years) than those in most European and US hepatitis C studies and all had genotype 1b – both characteristics reflective of the hepatitis C patient population in Japan. About two-thirds were women. None had cirrhosis at study entry.

Overall, 70% of participants achieved RVR at week 4 of treatment. At the end of the 24-week course of therapy, 88% had undetectable viral load. The SVR4 rate was 81%, dropping to 77% at post-treatment weeks 12 and 24. By patient group, 91% of the prior null responders and 64% of the ineligible/intolerant participants achieved a cure.

Three people experienced viral breakthrough while on therapy and four relapsed after finishing treatment. Again, IL28B gene pattern had no apparent effect. The researchers noted that almost all patients who were not cured showed low plasma concentrations of the two drugs, although many others with low levels nevertheless achieved SVR.

Side-effects were common, leading to three treatment discontinuations, but the researchers emphasized that the adverse event profile was generally more favourable than that of pegylated interferon/ribavirin for this difficult-to-treat patient population.