Hepatitis C drug alisporivir is effective, but pancreatitis a concern 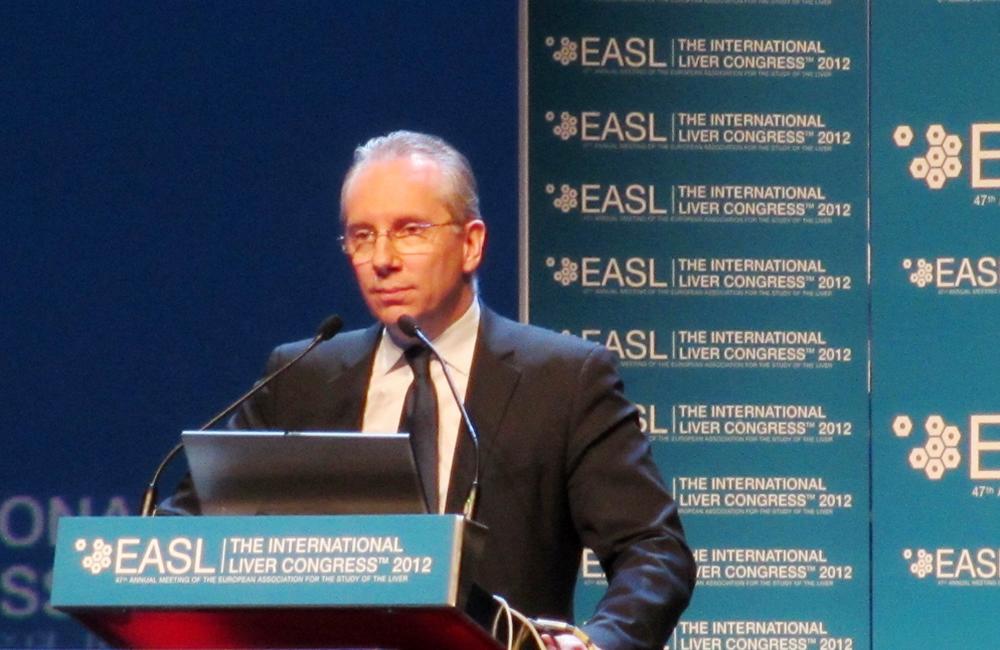 Alisporivir (formerly Debio 025) in interferon-free combinations cured more than 80% of patients with hepatitis C virus (HCV) genotype 2 or 3, researchers reported at the 47th International Liver Congress (EASL 2012) last week in Barcelona. The drug has been put on hold, however, due to a small number of recipients developing life-threatening pancreas inflammation.

The advent of direct-acting antiviral agents for hepatitis C has brought about a new era of treatment, but many patients and clinicians are eager to see all-oral regimens that do not include interferon and its difficult side-effects.

Alisporivir is a cyclophilin blocker that stops HCV from replicating in cells. Unlike many of the new drugs in development, it targets a component in host cells rather than the virus itself. Previous small studies showed that it is active across HCV genotypes and has a high barrier to resistance.

Inflammation of the pancreas.

About two-thirds of participants were men, about half were white and half were Asian, and the average age was about 42 years. One-third had genotype 2, the remainder genotype 3.

All alisporivir recipients started with a 'loading dose' of 600mg twice-daily before beginning their assigned regimen. Those who achieved rapid virological response (RVR) – or HCV viral load below the limit of quantification (< 25 IU/mL) at week 4 – stayed on the assigned regimen through week 24. Those who did not achieve a rapid virological response switched to 600mg alisporivir plus pegylated interferon/ribavirin and continued treatment for the same duration.

In an intention-to-treat analysis, 81% of people taking 1000mg alisporivir alone, 83% and 81%, respectively, taking 600mg or 800mg alisporivir plus ribavirin and 77% taking alisporivir plus pegylated interferon achieved sustained virological response (< 25 IU/mL) at 12 weeks after completing treatment (known as SVR12), compared with 58% of those receiving pegylated interferon/ribavirin. (The cure rate in the latter group was rather low, as interferon-based therapy typically produces SVR rates in the range of 70 to 80% for genotype 2/3 patients.)

Cure rates were higher in a per-protocol analysis that only included participants who remained on their assigned regimen for the full 24 weeks; the corresponding SVR12 rates were 91%, 91%, 94%, 86% and 74%, respectively. RVR was a good predictor of SVR.

Overall, alisporivir was generally well tolerated. The most common side-effects among people not taking interferon were 'psychiatric disorders' (24%), nausea (18%), and fatigue and headache (both 13%). Flu-like symptoms were substantially less common among people who did not take interferon.

Rates of serious adverse events in the alisporivir arms ranged from 1% to 11%, vs 5% in the pegylated interferon/ribavirin arm. Rates of discontinuation due to adverse events among alisporivir recipients ranged from 2% to 8%, with none in the control arm. Up to 12% of people taking alisporivir with ribavirin developed moderate bilirubin elevation – which Pawlotsky explained was due to the drug's effect on bilirubin transporters – but severe elevations were uncommon.

Importantly, Pawlotsky reported that no participants in this phase IIb trial developed pancreatitis. At the opening press conference of the congress, it was noted that the US Food and Drug Administration (FDA) had recently put a hold on further development of alisporivir after a small number of patients – six out of approximately 1800 people who have received the drug in various studies – experienced pancreatitis (inflammation of the pancreas), leading to one death.

VITAL-1 principal investigator Nikolai Naoumov from Novartis (who attended the presentation but was not a presenter) explained that these cases occurred among patients taking alisporivir in combination with pegylated interferon/ribavirin. Since pancreatitis has been reported as a rare side-effect of interferon, the study team is conducting further testing to determine if alisporivir raises the risk.

Despite this setback, the researchers concluded, "Cyclophilin inhibition plus ribavirin represents an effective interferon-free option and achieves high SVR rates in patients with HCV genotypes 2 or 3 with RVR" and "in this study, alisporivir was associated with low and similar rates of discontinuation due to adverse events across treatment groups".

Pawlotsky JM et al. Alisporivir plus ribavirin is highly effective as interferon-free or interferon-add-on regimen in previously untreated HCV-GT2 or GT3 patients: SVR12 results from VITAL-1 Phase 2b study. 47th Annual Meeting of the European Association for the Study of the Liver, Barcelona, abstract 1405, 2012.