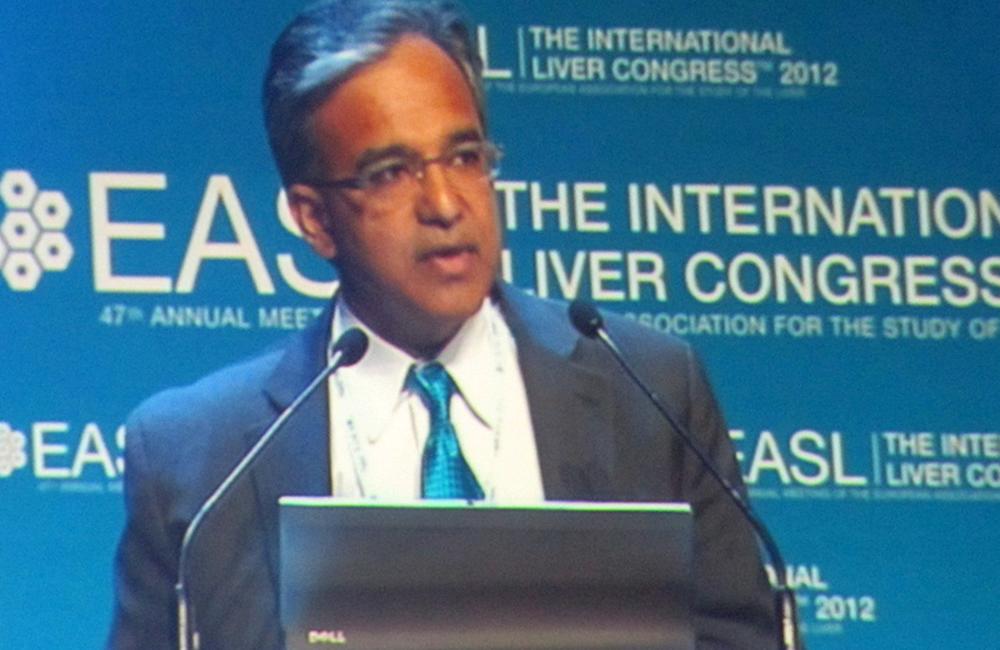 Last year's approval of the first direct-acting antiviral agents has changed the face of hepatitis C treatment. The first such drugs still must be taken with pegylated interferon and ribavirin, but they increase cure rates and offer the potential for shorter treatment.

GS-7977 (formerly PSI-7977) is a uridine nucleotide HCV NS5B polymerase inhibitor that has demonstrated good efficacy in early studies when combined with standard therapy or other direct-acting antivirals, though most people relapsed when they used GS-7977 plus ribavirin alone.

Kris Kowdley from Virginia Mason Medical Center in Seattle and investigators at several other US sites enrolled 332 treatment-naive hepatitis C patients without cirrhosis but with difficult-to-treat HCV genotypes. All but 16 had HCV genotype 1, about 70% of them with subtype 1a (the rest had genotype 4 or 6).

Two-thirds of participants were men, about 85% were white and the average age was about 50 years. Approximately 25% had the favourable IL28B CC gene pattern associated with good response to interferon.

Participants were randomly assigned to receive 400mg once-daily GS-7977 plus once-weekly pegylated interferon and daily ribavirin for 12 or 24 weeks, or else triple therapy for 12 weeks followed by either GS-7977 alone or GS-7797/ribavirin for an additional 12 weeks (24 total weeks on treatment).

At the end of treatment, the corresponding response rates were 98%, 99% and 99%, respectively, with no patients experiencing viral breakthrough while on therapy.

Four weeks after completing treatment, 94% of people in the 12-week triple therapy arm and 92% in the other two groups achieved sustained virological response (SVR4).

Looking just at participants in the first arm, who received 12 weeks of triple therapy without further treatment, 90% achieved 12-week sustained virological response (SVR12), generally regarded as a cure. Follow-up is continuing for the patients treated for 24 weeks.

Four people who relapsed after finishing treatment in this arm had their virus sequenced to look for resistance, and none showed evidence of the signature S282T mutation (deep sequencing results are pending).

GS-7977 triple therapy was generally well tolerated. The most common side-effects were those associated with interferon including fatigue and headache. Interestingly, fever and chills were more than twice as common among people who received the short triple regimen. Skin rash and anaemia were more common in the two groups treated for 24 weeks.

Although 10% of patients in the 12-week triple therapy arm experienced severe adverse events compared with 5% and 4% in the other two arms, Kowdley explained that no serious adverse events were attributed to GS-7977 and no two patients experienced the same serious events.

"GS-7977 400mg once daily in combination with [pegylated interferon/ribavirin] for 12 weeks is potent, safe and highly effective for the treatment of HCV genotype 1", the researchers concluded, adding that "12 weeks of GS-7977 in combination with [pegylated interferon/ribavirin] appears to be as effective as 24 weeks of therapy".

During the question period following his presentation, Kowdley noted that eight of the eleven genotype 4 patients in the study and all five of the genotype 6 patients achieved SVR4.

Asked about his presentation's provocative subtitle referencing "an end to response-guided therapy", Kowdley suggested that a drug with a high barrier to resistance such as GS-7977 might allow a "paradigm shift" toward standardised shorter treatment.