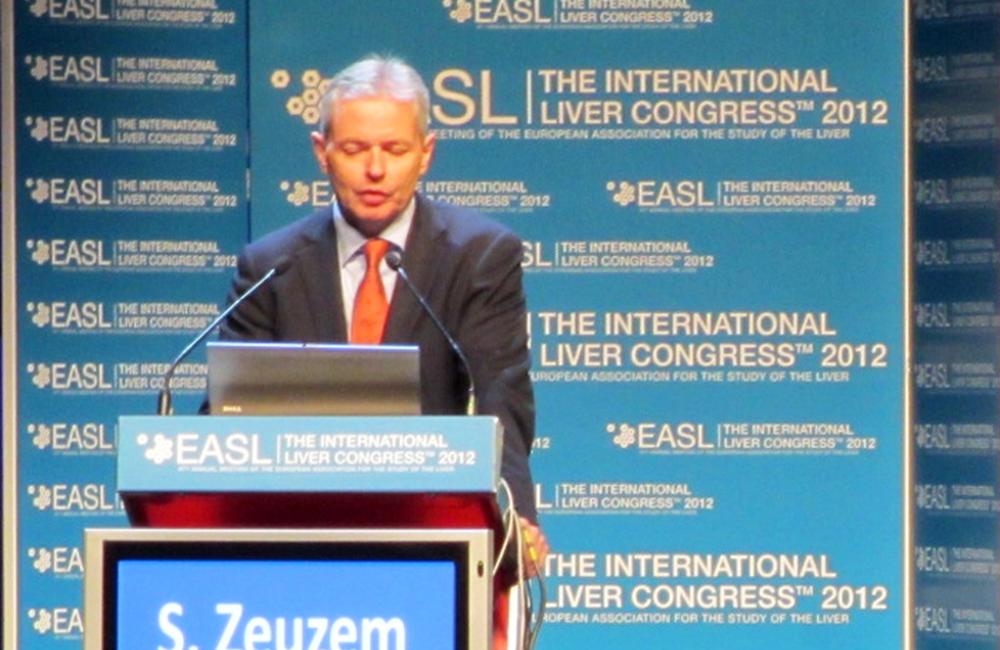 A combination of TMC435 – also known as simeprevir – plus pegylated interferon and ribavirin raised cure rates for genotype 1 hepatitis C patients who did not respond to previous treatment, according to a study presented at the 47th International Liver Congress last week in Barcelona.

Last year's approval of the first direct-acting antiviral agents has changed the face of treatment for chronic hepatitis C, but several potentially more effective and better tolerated next-generation drugs are under development. Those expected to be next in line for approval will be used with pegylated interferon/ribavirin until trials of all-oral therapy are completed.

In the ASPIRE trial, Stefan Zeuzem from JW Goethe University Hospital and an international team of investigators evaluated TMC435 added to the previous standard-of-care treatment for chronic hepatitis C.

About two-thirds of participants were men, almost all were white, and the median age was 50 years. Just over 40% had HCV subtype 1a, the rest 1b; most had high HCV viral load at baseline. Seventeen per cent had the favourable IL28B 'CC' genotype associated with good response to interferon. Nearly 20% had advanced liver fibrosis (stage F3) and a similar proportion had cirrhosis (stage F4) at baseline. Patients with liver cancer, transplant recipients and HIV or hepatitis B co-infected people were excluded.

At week 4 of treatment, rapid virological response (RVR) rates among patients receiving 100mg TMC435 were 67%, 59% and 53%, respectively, in the 12-, 24- and 48-week groups. Among people receiving 150mg TMC435, the corresponding rates were 62%, 68% and 66%, respectively. Only 2% of this difficult-to-treat population saw a rapid response with pegylated interferon/ribavirin alone.

Among prior relapsers, those with HCV subtype 1a and 1b had similar cure rates, but among prior partial and null responders those with subtype 1b did better. People with minimal fibrosis responded better overall than those with advanced fibrosis or cirrhosis.

As described in another presentation at the conference by Oliver Lenz from Tibotec, viral breakthrough and relapse were usually associated with signature resistance mutations at NS3 positions 80, 122, 155 and/or 168, but the distribution of mutations varied significantly between genotype 1a and 1b.

The most common side-effects across all groups were headache, fatigue and flu-like symptoms. TMC435 recipients were more likely to experience pruritis (itching) or skin rash than those in the control group, but severe rashes were rare (0.5%). Changes in blood cell levels were similar in the TMC435 and control arms. People taking TMC435 were more likely to develop elevated bilirubin, which Zeuzem explained was related to the drug's effect on two transporters.

Based on the finding of somewhat better response rates in the higher-dose TMC435 arm – especially for prior partial or null responders – the 150mg dose is currently undergoing testing in phase III clinical trials.

Zeuzem noted that while all arms were treated for a total of 48 weeks in this study, data "clearly indicate that a treatment duration of 12 weeks achieves optimal SVR rates", suggesting that TMC435 will be suitable for response-guided therapy.

Lenz O et al. TMC435 in patients infected with HCV genotype 1 who have failed previous pegylated interferon/ribavirin treatment: virologic analyses of the ASPIRE trial. 47th Annual Meeting of the European Association for the Study of the Liver, Barcelona, abstract 9, 2012.