Cognitive impairment or dementia can have multiple causes. They include stroke and other cerebrovascular conditions that reduce blood flow to the brain, Alzheimer’s disease, and HIV-associated neurocognitive disorder. The latter occurs when HIV itself (or the response of the immune system to HIV) directly affects the brain and causes cognitive disorders. This form of cognitive impairment is more common in people who had a low CD4 count before they began HIV treatment.

A US study looked into whether men who age with HIV have a higher risk of dementia than their HIV-negative counterparts. They compared 1114 former military personnel who were living with HIV with 1114 of their colleagues who were HIV negative.

Reviewing eleven years of medical records, they looked for diagnoses of dementia of any cause – except for dementia caused by alcohol or drug abuse. There were cases of dementia in 57 of the HIV-positive participants (5%), compared with 33 among their HIV-negative counterparts (3%).

The average age of participants was 62 years. The researchers estimated that around 20% of military veterans with HIV would be expected to be diagnosed with dementia by the age of 70, whereas in those without HIV, 20% would receive this diagnosis by the age of 76.

When looking at these figures, it’s important to note that large numbers of the participants in this study had risk factors for dementia, including long periods of not taking HIV treatment, high blood pressure, stroke, depression and heavy alcohol or drug use. Rates of dementia may not be as high in other settings.

aidsmapLIVE: A long life with HIV 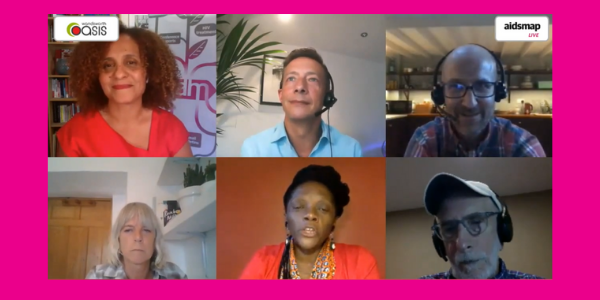 Taking your own samples for STI tests

When you have a sexual health check-up, the doctor or nurse may take a sample from your rectum or throat to check for infections. Or they may give you a kit and ask you to take your own samples.

You might be wondering whether taking the sample yourself is as reliable as having a healthcare worker do it. As there hasn’t been much research on this before, a group of doctors in Leeds in the UK did a study to find out.

They compared the accuracy of healthcare worker-collected samples and self-sampling for the detection of chlamydia and gonorrhoea, both in the rectum and throat. They also compared the time needed and possible economic benefits of self-sampling.

The study comprised of women and gay men with varied sexual experience. A healthcare worker took their samples and compared them against self-taken samples.

There were no marked differences in the diagnostic accuracy of samples taken by healthcare workers and patients for rectal and throat gonorrhoea and chlamydia.

Self-sampling was also likely to save costs to the NHS due to reduced manpower needed. 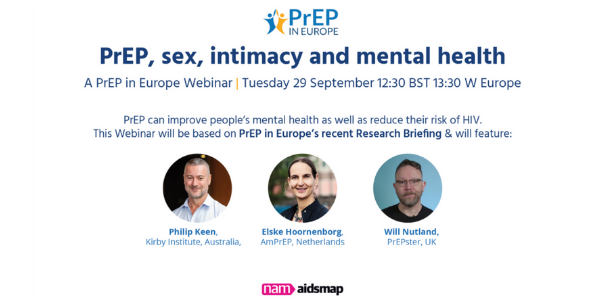 The webinar was based on PrEP in Europe's recent research briefing and included presentations from Philip Keen (Kirby Institute, Australia), Elske Hoornenborg (AmPrEP, the Netherlands) and Will Nutland (PrEPster, UK).

How HIV clinics can assess what really matters to patients

A group of researchers, clinicians and people with HIV in the UK have come together to develop a ‘patient reported outcome measure’. It is a brief questionnaire which HIV clinic staff can use to find what concerns their patients have, whether they are medical or non-medical.

Professor Richard Harding explained in an interview with us: “What’s really interesting in clinical encounters is that the person living with the condition thinks, ‘the doctor or nurse will ask me about what matters’, so they are waiting to be asked, and the clinician is thinking, ‘if there is something of major concern, the patient will tell me’. So many of those issues are never brought to the clinical encounter.

“What we need is some kind of mechanism to make it clear that, within this clinical encounter, all kinds of problems are important and relevant, and we need to make sure patients are asked about them every time,” he said.

“By having this routine measure, you get a more detailed assessment, the patient is better able to express their needs, communication improves, you get better use of clinician time, and you improve patient-reported outcomes,” Harding told us. 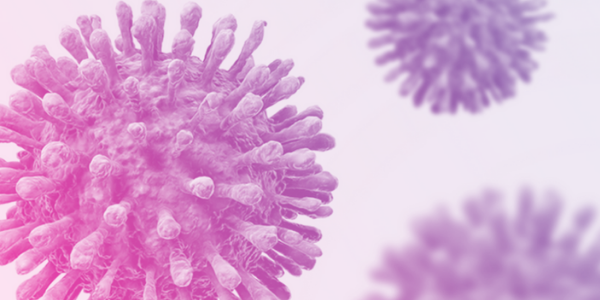 Find out more about the search for an HIV cure in our recently updated About HIV page.

Timothy Ray Brown, the first person to be cured of HIV, died on Tuesday 29 September 2020. He delivered messages of hope for the HIV community through social media and interviews until nearly the end of his life. The passing was announced on his Facebook page by his partner, Tim Hoeffgen, and various friends.

Sex can be a difficult topic to discuss at the best of times but in COVID, with uncertainty about risk factors for transmission of the virus, it is extremely hard to get most people to open up about the issues it raises. Here some thoughtful HIV-positive people – some in lockdown states, some not – have put their perspectives down to help us to get our head around what having sex (or choosing not to) involves at the moment.