Erectile dysfunction (or impotence) is when you cannot get or keep an erection that enables you to have sex. Previous studies have shown that it is more common in men living with HIV.

There may be physical or psychological causes, or more frequently a combination of the two. Factors such as dealing with a new diagnosis, stigma, and anxiety about passing on HIV may impact upon your ability to get hard or stay hard. Physical causes may include older age, diabetes, heart disease, taking certain types of HIV medication and how long you have taken these medications.

A group of researchers have been collecting data on US military personnel (serving or retired) who are living with HIV for over 20 years. They recently found that just under 10% had been diagnosed with erectile dysfunction. To see what the causes might be, they compared 543 men who had erectile dysfunction with a group of HIV-positive men who did not have it.

They identified four risk factors. One was starting HIV treatment more than four years after HIV diagnosis (unfortunately quite common as many of the men in the study had been diagnosed in the 1980s or 1990s). Despite the benefits of starting treatment, the study also found that taking anti-HIV drugs known as protease inhibitors increased the risk of erectile dysfunction. In most cases, this was the protease inhibitors that were commonly used in the 1990s and early 2000s, rather than more recent versions that are probably safer.

The researchers say that doctors should ask men with HIV about erection problems in order to offer support. They say that erectile dysfunction can be an early sign of potentially serious cardiovascular events in the future.

On Monday 7 June, join us on Facebook and Twitter at 6pm (UK time) for aidsmapCHAT, our news broadcast for people living with HIV. NAM’s Susan Cole and Matthew Hodson will be talking to consultant physician in sexual health and HIV at Barts Health NHS Trust, Dr Rageshri Dhairyawan; human rights activist Deondre B. Moore from Prevention Access Campaign; and co-founder of Access to Medicines Ireland, Robbie Lawlor.

Some research suggests that people living with HIV might age prematurely or more markedly than other people. In other words, their biological age (how well their body functions) might be greater than their chronological age (how many years they have lived).

This is probably linked to the immune system deterioration and inflammation that persists in people living with HIV, despite successful HIV treatment.

A recent study measured biological age in people who were previously untreated and then took HIV treatment, comparing them with a group of HIV negative people. The results suggest that untreated HIV infection is associated with biological age acceleration, which is more pronounced in people with CD4 counts below 200.

Feelings about sex after your HIV diagnosis

Good sex, intimacy and physical pleasure are integral aspects of wellbeing. Your HIV status does not take away your right to intimacy and pleasure. Learn more about feelings around sex after being diagnosed with HIV in our About HIV page.

Lots of studies have found that people often put on some weight in the first year or two of starting a modern HIV treatment regimen. While this is more likely with some anti-HIV drugs than others, the medications are not the only factor associated with weight gain. A lower CD4 count, Black race, female sex, and baseline weight are also associated with weight gain. Some of the weight gained after starting treatment may be a 'return to health' effect, especially in people with more advanced HIV disease or lower body weight.

To better understand the issue, some scientists have suggested looking at studies of people who switch from one regimen to another, as this group of people will already have experienced any 'return to health' weight gain on their first antiretroviral regimen. The results of an analysis of 12 different switch studies has just been published.

The researchers found that gaining weight after switching to a new antiretroviral combination is common, but especially so after switching from efavirenz or tenofovir disoproxil fumarate (TDF), the older formulation of tenofovir. This suggests that some older antiretrovirals may have a weight-suppressive effect, which may be as important, or more important, than the weight-gain effect of new medications.

Most weight gain was modest (an extra 2kg over two years, compared to an extra 0.5kg in people who didn’t change treatment), with most of the weight gained in the first year.

Gay and bisexual men living with HIV approach the risk of re-infection with hepatitis C after cure in different ways, a Swiss study suggests. The men had all been among the first to receive the highly effective modern hepatitis C treatment in 2016-2017 and had also received advice and counselling to help them avoid catching it again through risky sex or drug use.

Most were surprised by their hepatitis C diagnosis and formed three different groups when processing their diagnoses.

One group were keen to change their sexual behaviour so as to avoid having hepatitis C again. These men had often been living with hepatitis C for several years before the new, more effective medications became available. They greatly appreciated the counselling they received, as one man explained:

“The light went on for me. In the sense of just thinking before you do something. Before, I didn’t have any knowledge of where you can get hepatitis C. You simply go too far and now you say to yourself: I won’t let it go so far again.”

“I’d rather have, for example, one encounter less and with that have the risk only once instead of twice. Rather that than… use a rubber and then not have any fun anymore.”

The third group accepted the risks that accompanied their sexual behaviour as they viewed behaviour change as requiring considerable effort, whereas they perceived medical treatment as an easier option. They accepted – and even expected – multiple rounds of treatment or possibly living with hepatitis C for many years. However, they were concerned about disclosure and the possibility of sexual rejection:

Find out more about how hepatitis C is passed on during sex in our leaflet, below.

How hepatitis C is passed on during sex 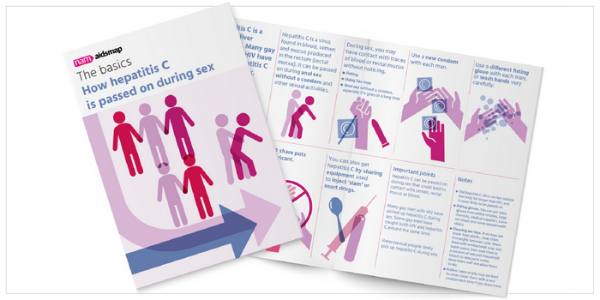 We've updated our easy-to read and illustrated information page for gay men living with HIV, giving basic information on how hepatitis C is passed on during sex.

Hepatitis C can be passed on during sex that could lead to contact with semen, rectal mucus or blood. Many gay men with HIV have picked up hepatitis C during sex. Some HIV-negative men have got it too.

It has now been six months since the landmark HIV Commission report on ending new cases of HIV in England by 2030 was published with support from Terrence Higgins Trust, National AIDS Trust, and Elton John AIDS Foundation.

More than 34 world experts and leaders in the movement to end AIDS, have signed an open letter urging Boris Johnson to tackle the growing emergency on HIV and AIDS when the G7 meets in June.

Israeli scientists have studied 143 HIV-positive people who received the Pfizer-BioNTech vaccine. High levels of antibodies against SARS-CoV-2 were produced after the second vaccination.

Billy Porter breaks a 14-year silence: “This is what HIV-positive looks like now” | Hollywood Reporter

For the first time since being diagnosed more than a decade ago, the Pose star opens up about the shame that compelled him to hide his condition from his castmates, collaborators and even his mother, and the responsibility that now has him speaking out: "The truth is the healing."