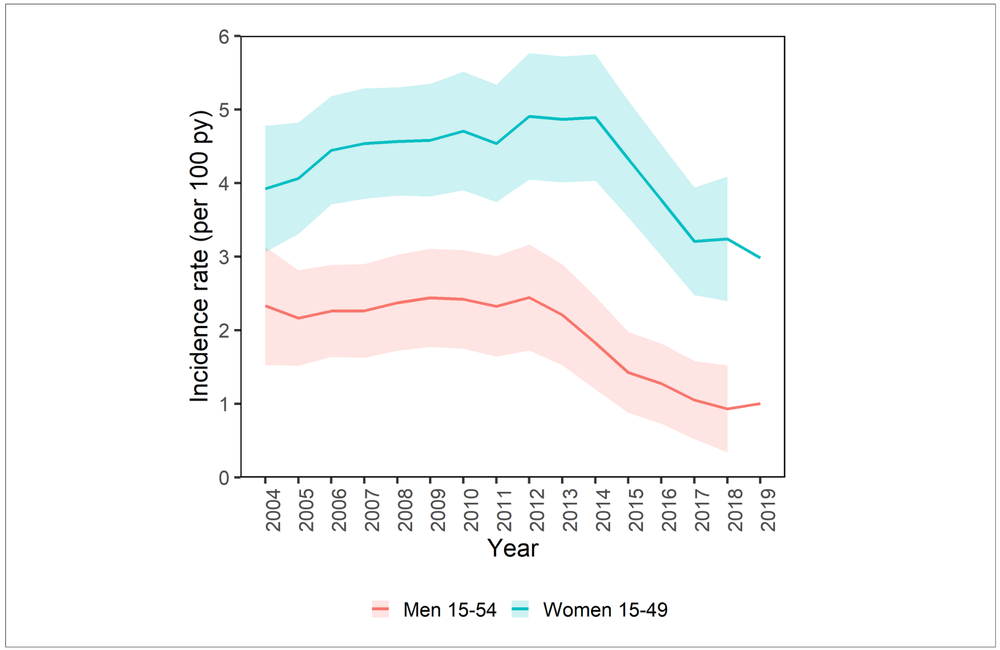 The scale-up of HIV treatment, youth-focused prevention interventions and voluntary male circumcision has changed the age distribution of HIV incidence in South Africa according to a study published in the Proceedings of the National Academy of Sciences.

South Africa has the largest HIV epidemic in the world, with 7.7 million people currently living with HIV. A longitudinal study was conducted over 16 years in KwaZulu-Natal, a province with one of the highest adult HIV prevalences in the world, to estimate changes in the age distribution of HIV incidence. A total of 22,406 individuals who tested HIV negative followed by at least one other test between 2004 to 2019 were included in the study. HIV incidence rates before and after the expansion of antiretroviral therapy (ART) under universal test and treat in 2016 were compared.

During the study period, the median age of seroconversion increased by 5.5 years in men, from age 25.5 in 2004 to age 31 in 2019, and by 3 years in women, from 21 in 2004 to 24 in 2019. At the same time that HIV incidence has fallen significantly among young people aged 15 to 24, HIV prevalence has more than doubled in those over 25, due to people who already have HIV getting older and their increasing life expectancy.

The researchers have looked into three different possible explanations for the age shifts in the HIV incidence. First, the continued focus on HIV prevention among youth. The highest increase in the uptake of voluntary male medical circumcision was among young men and this increase possibly played a role in the reduction of HIV incidence in young men and their partners as well. However, further analysis showed that it was not the primary factor causing the age shift.

"Expanding age targets for prevention may be necessary to address a changing demographic landscape of risk in sub-Saharan Africa."

“While the continued focus of HIV prevention on younger populations, especially adolescent girls and young women, remains a crucial component of population-level risk reduction, more attention is needed to address lagging incidence declines among older individuals,” the researchers comment. “Expanding age targets for ongoing prevention programs (including pre-exposure prophylaxis and voluntary male circumcision) may be necessary to address a changing demographic landscape of risk in sub-Saharan Africa over the coming decade.”

The next possible explanation was different levels of population viral load in different age groups. The authors suggest that higher prevalence of HIV in older age groups could result in higher levels of detectable viral load, despite the higher ART coverage, in older age groups.  Further research is needed to test this hypothesis by looking into differences in viral suppression levels over time by age and sex.

And lastly, the overall reduced rates of HIV infection. With the effective ARV treatments and prevention tools, HIV transmission rates are significantly reduced. The researchers note that “the fewer individuals who become infected earlier in life means those individuals stay in the population at risk for longer, thereby shifting the relative share of infections to older individuals.“ Again, further research is needed to test this hypothesis over a long period of time to better evaluate the dynamic changes in the age distribution of HIV incidence.

The results of the study provide direct epidemiological evidence of the changing demographics of HIV in Sub-Saharan Africa in the era of large-scale HIV treatment and prevention and highlight the need to re-evaluate age targets for intervention strategies going forward.

Although new diagnoses in the UK are trending downward for all groups, not enough routine HIV testing and PrEP promotion are happening where heterosexual folks receive health care.
TheBody
13 Apr 22
Finance & funding