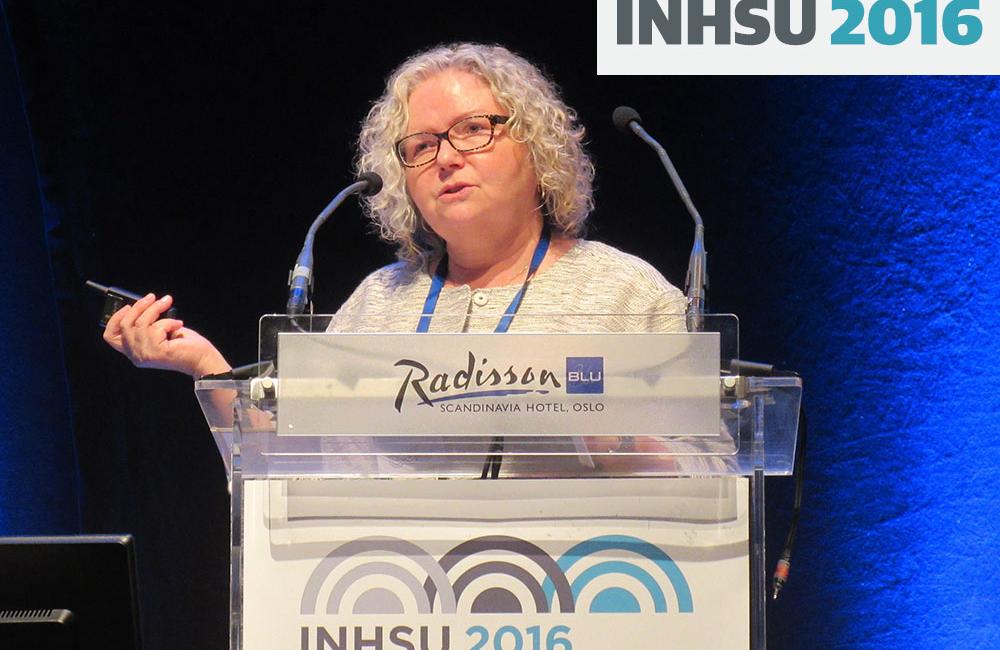 The 5th International Symposium on Hepatitis Care in Substance Users (INHSU 2016) got underway yesterday with an overview of the epidemiology of hepatitis C virus (HCV) among people who inject drugs and a look at public health and harm reduction approaches to preventing, treating and managing hepatitis C in this often neglected population.

The conference, sponsored by the International Network on Hepatitis in Substance Users, brought together more than 400 researchers, healthcare providers and advocates for people who use drugs and people living with hepatitis C. The gathering included several speakers from drug user organisations in Europe and Australia.

Olav Dalgard of Akershus University Hospital opened the meeting, noting that the conference is particularly important at this time due to the advent of effective new interferon-free direct-acting antiviral treatment that can cure almost all people with hepatitis C in a few months with few side-effects.

With the medical research puzzle largely solved, the focus now turns to broadening access to treatment for the people who need it most, which prominently includes people who inject drugs. HCV is efficiently transmitted via shared needles and other injection equipment, and a large proportion of people who inject drugs contract HCV soon after they start to inject.

"The science is clear," said INHSU president Jason Grebely of the Kirby Institute at the University of New South Wales. "We now need to focus on overcoming barriers to access, and harness latest research to implement programs that work."

Sharon Hutchinson of Glasgow Caledonian University gave an overview of the burden of HCV infection among people who inject drugs. Current estimates suggest that 12.2 million people worldwide currently inject drugs, but reliable data is not available from all areas and the actual number could range from 8 to 22 million. Of these, an estimated 6.3 million have HCV and 1.6 million have HIV. But it is critical not to overlook people who have ever injected drugs in the past – a much larger population.

Viral hepatitis has become a leading cause of death and disability worldwide, now exceeding HIV, malaria and tuberculosis. While mortality among people with HIV dropped dramatically following the introduction of effective antiretroviral therapy in the mid-1990s, Hutchinson said it remains to be seen whether we will see HCV-related deaths fall to the same extent after the introduction of direct-acting antivirals.

People who inject drugs who have hepatitis C often have other health risk behaviours including heavy alcohol use and poor diet, which raises the risk of liver disease progression and death due to other cause. Deaths due to overdose are also common.

"Attaining sustained virological response may be an opportunity to focus on other health risks," Hutchinson suggested. "To eliminate liver disease burden we will need a multi-pronged approach, scaling up therapy but also tackling wider health risk behaviours."

Speakers also addressed primary HCV prevention among people who inject drugs who do not have the infection. A growing body of research supports the effectiveness of harm reduction approaches, but these are not yet accessible to all who need them, even in many high-income countries.

Holly Hagan of New York University reviewed research showing that a high coverage of needle and syringe programmes plus widely available opioid substitution therapy (OST) can reduce the risk of HCV transmission by about 70%; inadequate coverage, however, is much less effective.

Hagan also noted that sharing cookers, cotton filters and rinse water for preparing drugs can transmit HCV, along with needles and syringes. In fact, sharing cookers and cotton was an even higher risk than needles in some studies because more people do it. Yet while needle and syringe provision is now an accepted public health intervention, fewer programmes provide an adequate supply of related equipment.

The public health field increasingly recognises the benefits of OST, but it remains politically controversial in some areas. Johan Franck of the Karolinska Institute gave an overview of the history of and research supporting OST using methadone, buprenorphine and prescription heroin. Unfortunately, stimulant substitution has so far not proven very effective.

Matthew Hickman of the University of Bristol gave a talk on HCV treatment-as-prevention. Controlled trials in the HIV field have shown that antiretroviral treatment that reduces viral load to an undetectable level makes it nearly impossible to transmit HIV. Hepatitis C treatment should theoretically be even more effective in this regard, as it actually eliminates HCV, while HIV treatment only suppresses viral replication while on therapy.

Although there is not yet empirical evidence that HCV treatment will reduce transmission, modelling studies indicate that relatively modest scale-ups of treatment could have a major impact on hepatitis C epidemics, influenced by factors such as HCV prevalence in a given population. As such, guidelines increasingly recommend prioritising treatment for people who are likely to transmit HCV – such as active drug users who share equipment – in addition to people with advanced liver disease.

Ultimately, harm reduction approaches and hepatitis C treatment may not be enough to halt epidemics, and researchers are avidly seeking an HCV vaccine. Andrea Cox of Johns Hopkins University reviewed this research to date. John-Arne Røttingen of the Norwegian Institute of Public Health followed with a discussion of how lessons from the Ebola epidemic can inform the design of hepatitis C trials.

Developing an HCV vaccine is difficult because the virus is highly variable. While we know that HCV does not confer full protective immunity against reinfection, evidence indicates that some protective immunity does develop, and it appears to get stronger with each subsequent infection. A preventive vaccine candidate is now in clinical trials with data due in early 2017.

"We have a unique opportunity, if we can combine treatment and a vaccine, to accomplish what we can't do with other disease using one or the other," Cox concluded.

Several speakers emphasised the importance of involving people who inject drugs in the design of research and the development of prevention and treatment programmes.

"We have been too long neglected and seen as a group that can be ignored," said Ronny Bjørnestad from proLAR, a Norwegian organisation for people on OST. "We will no longer tolerate treatments with side effects. We have to increase prevention, start treating people fast, and give treatment to people who are at risk of infecting others, as well as for their own health."

Saga Rönnlund ended the day with a presentation of Liver Or Die, a peer education initiative created by the Swedish Drug Users Union.

"Just as myths are spread we can spread the opposite – correct information," she said.

Pioneers of the harm reduction response in Uganda

The drop-in centre of the Uganda Harm Reduction Network (UHRN) looks lonely from the deserted suburban pavement. It is a non-descript house, hidden behind an imposing solid pink steel gate, in an equally non-descript neighbourhood.
UNAIDS
10 May 21
Drug policy & policing

US: Do public health officials need to be political activists? A fight over an HIV crisis renews the question

This month, as West Virginia officials scrambled to prevent further spread, the state legislature all but banned one of their most effective tools for doing so: syringe exchanges that distribute sterile needles to people whose drug use places them at high risk of infection.
STAT
4 May 21
Harm reduction

Public health officials are struggling to contain an outbreak of HIV among homeless drug users in Boston that has persisted since early 2019 and likely worsened as the pandemic limited access to services such as testing. So far the outbreak has affected 113 people, with 13 new cases identified between Jan. 1 and Feb. 28.
Boston Globe
22 Apr 21
Harm reduction

Drug Overdose Deaths Have Surged During the Pandemic, C.D.C. Says

The latest numbers surpass even the yearly tolls during the height of the opioid epidemic and mark a reversal of progress against addiction in recent years.
New York Times
15 Apr 21
More editors' picks