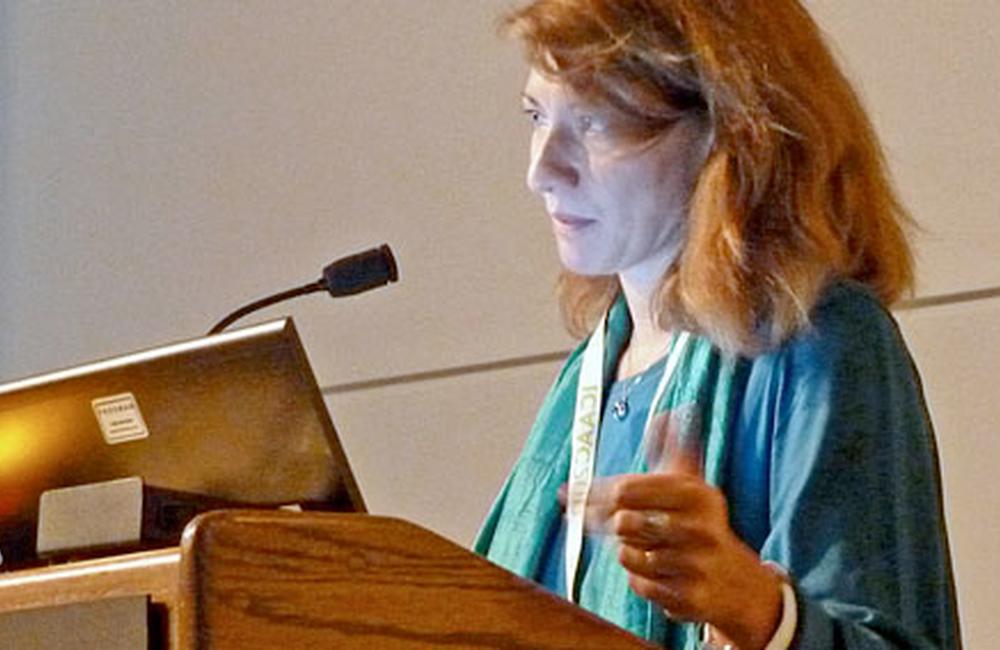 Paola Nasta, from Spedali Civili di Brescia, presenting at ICAAC 2013.
This article is more than 9 years old. Click here for more recent articles on this topic

People co-infected with HIV and HCV, mostly with hepatitis C virus (HCV) genotype 3, responded about as well as HIV-negative people to interferon-based therapy after taking into account other factors associated with poor treatment response, according to an Italian study presented at the 53rd Interscience Conference on Antimicrobial Agents and Chemotherapy (ICAAC) this month in Denver. Advanced liver fibrosis was common in the co-infected group, supporting the need for early treatment.

An estimated one-third of HIV-positive people are co-infected with HCV, with higher rates in countries where the HIV epidemic is largely driven by injecting drug use. Over years or decades, chronic hepatitis C can lead to serious liver disease, including advanced fibrosis, cirrhosis and hepatocellular carcinoma. HIV/HCV co-infected people tend to experience faster liver disease progression and do not respond as well to interferon as people with HCV alone.

Paola Nasta from Spedali Civili di Brescia and colleagues compared treatment outcomes amongst HIV/HCV co-infected and HCV mono-infected people with HCV genotype 2 or 3 treated at their hospital between 2005 and 2010. Genotypes 2 and 3 have traditionally been classified as 'easier-to-treat' in comparison with 'harder-to-treat' genotypes 1 and 4.

Two-thirds of participants were treated with pegylated interferon alfa-2a (Pegasys) and one-third with pegylated interferon alfa-2b (PegIntron) along with weight-based ribavirin (15mg/kg/day). All co-infected people were treated for 48 weeks. HCV mono-infected patients could stop at 24 weeks if they had absent-to-moderate fibrosis, low baseline HCV viral load or rapid virological response at week 4. Both groups stopped due to futility if HCV RNA was still detectable after 12 weeks of therapy.

Anaemia and neutropenia can be treatment-limiting side-effects of ribavirin and interferon. Patients with cirrhosis were eligible to use erythropoietin (EPO) to stimulate red blood cell production. If haemoglobin remained low despite EPO, they could reduce their ribavirin dose. All HIV-positive participants could use granulocyte colony-stimulating factor (GCSF) to promote white blood cell growth, but HIV-negative people could do so only if they had cirrhosis. Those with persistent white blood cell deficiency could lower their interferon dose.

The overall sustained virological response (SVR) rate after completion of treatment was 69%, but it was significantly lower in the HIV/HCV co-infected group (58%) compared with the HCV mono-infected group (67%). HIV-negative individuals were 50% more likely to respond to treatment (odds ratio 1.5).

Co-infected and mono-infected participants were equally likely to be virological non-responders (15 vs 16%). But co-infected people were slightly more likely to experience post-treatment relapse even though they were treated for longer (50 vs 45%, not a significant difference). A similar proportion in both groups discontinued treatment early for any reason (35 vs 40%).

There were not enough HIV-positive people with HCV genotype 2 to analyse the genotypes separately, but looking at all participants together, the SVR rate for genotype 2 was significantly higher than for genotype 3 (72 vs 61%, respectively). This might have contributed to the lower response rate in the co-infected group compared with the mono-infected group, which had a more even genotype distribution.

"HCV mono- and HIV/HCV co-infected patients seem to have a similar rate of SVR in our clinical setting," the researchers concluded. They suggested this might be due to HIV-positive people receiving a longer duration of treatment or being more likely to use GCSF to maintain higher drug doses.

Because HIV/HCV co-infected people have a higher rate of advanced fibrosis, and because this is one of the most important variables related to poor treatment outcomes, the researchers recommended that co-infected people with HCV genotypes 2 or 3 should receive early treatment.