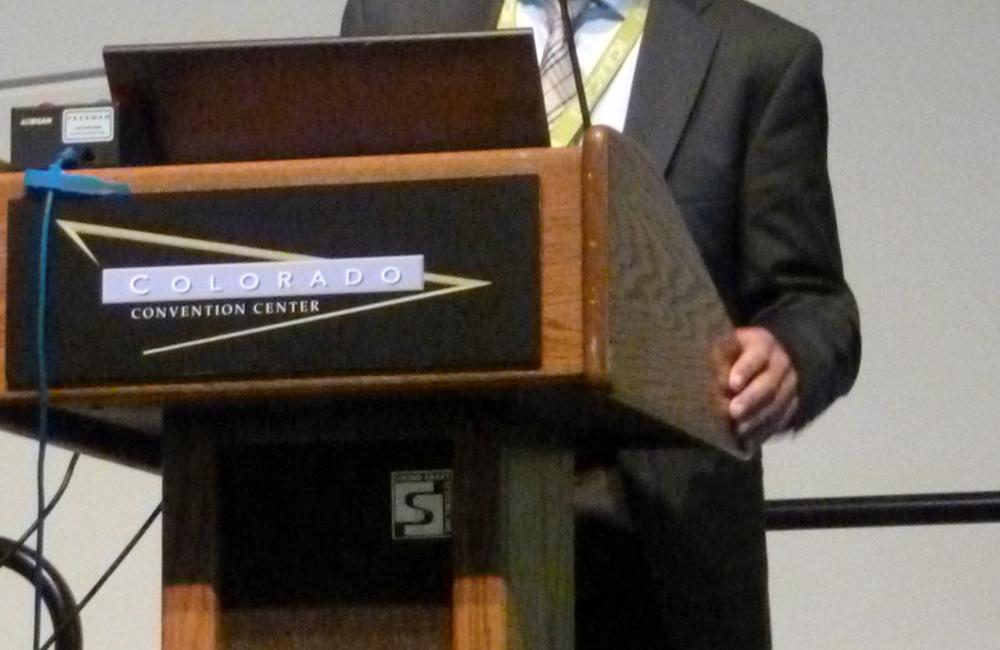 Holger Zimmerman of AiCuris. Photo by Liz Highleyman, hivandhepatitis.com.
This article is more than 9 years old. Click here for more recent articles on this topic

Researchers are especially eager to develop new antiretrovirals that have a high barrier to resistance and low cross-resistance with existing drugs. Given the effectiveness and good tolerability of existing medications, they must also be simple to administer – ideally once-daily – and suitable for combining in fixed-dose coformulations to minimise pill burden.

Holger Zimmerman from AiCuris in Wuppertal, Germany – a Bayer spin-off focusing on infectious disease therapies – gave a late-breaker presentation on AIC292, an NNRTI belonging to a novel chemical class known as diarylpyrazole-[imidazolidinone]-carboxamides.

In this analysis, AIC292 was evaluated in vitro using cell-based assays against wild-type HIV (lacking resistance mutations) and multiple NNRTI-resistant strains. It was also tested in combination with marketed antiretroviral drugs from the nucleotide/nucleoside, NNRTI, protease inhibitor and integrase inhibitor classes.

ACI292 showed good activity at low nanomolar concentrations against wild-type HIV and viruses with a variety of NNRTI-resistance mutations, including the highly prevalent K103N, Y181C and G190A substitutions. Tested against a panel of viruses carrying double, triple or quadruple NNRTI-resistance mutations, AIC292 worked better than currently approved drugs in its class. Zimmerman said it "should be able to cover" those resistant viruses in clinical use.

Further, AIC292 proved highly active against HIV bearing the L100I mutation, which is associated with resistance to the approved NNRTIs efavirenz (Sustiva or Stocrin), etravirine (Intelence) and rilpivirine (Edurant). Zimmerman described these viruses as "hypersusceptible" to AIC292, adding that the molecular mechanism for this is not yet known.

AIC292 also demonstrated a high barrier to resistance, remaining active against wild-type and NNRTI-resistant HIV for more than a month when used as monotherapy. At least two mutations are required to confer resistance, Zimmerman said.

When studied in combination with existing antiretrovirals, AIC292 showed no antagonistic activity with any of the 21 tested drugs from all classes. On the contrary, it demonstrated additive or slightly synergistic activity (meaning the drugs work better together than their added individual effects would predict) in all combinations.

AIC292 appeared to be well-tolerated in different laboratory human cell lines and in animals. "No noteworthy findings" were observed in four-week toxicity studies in rats and dogs.

In the phase 1 trial, two groups of eight volunteers received either AIC292 at single ascending doses or placebo. The drug was shown to be safe and well-tolerated at doses up to 1400mg. There were "only a limited number of adverse events" (not specified in the presentation), with no concerns related to vital signs, electrocardiograms or laboratory safety parameters.

Looking at pharmacokinetics, AIC292 had protein-binding levels similar to other NNRTIs. It did not inhibit major CYP450 enzymes involved in drug metabolism, suggesting low potential for drug-drug interactions. Testing against 68 different receptors showed low potential for "off-target activity". In humans it had a half-life of about 20 hours, suggesting it is suitable for once-daily administration.

"AIC292 represents a promising novel drug with the antiviral properties of a next-generation NNRTI for the treatment of HIV-1 infection," the researchers concluded. "Preclinical data support further clinical evaluation."