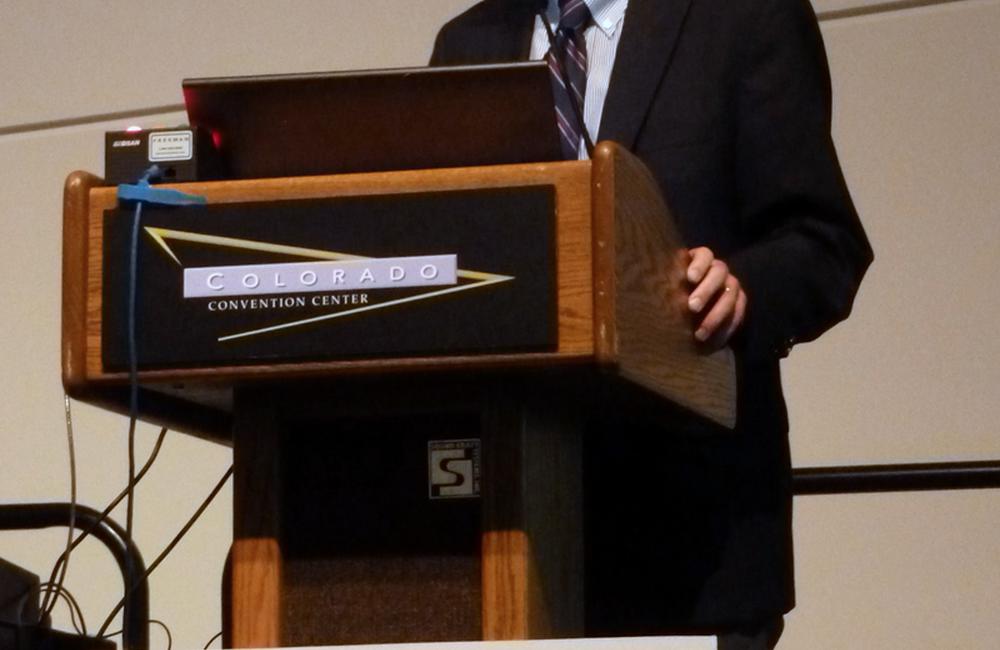 Tenofovir alafenamide (TAF), a new formulation that produces higher drug levels in cells but allows for lower dosing, was as effective as the current tenofovir disoproxil fumarate (TDF) formulation, but had less impact on markers of kidney function and bone turnover, researchers reported yesterday at the 53rd Interscience Conference on Antimicrobial Agents and Chemotherapy (ICAAC) in Denver.

Tenofovir (Viread, also in the Truvada, Atripla, Eviplera and Stribild coformulations) is one of the most widely used antiretroviral drugs. It is highly effective and generally regarded as safe and well-tolerated. However, it can cause kidney toxicity in susceptible individuals and is associated with bone loss that begins soon after starting treatment. The long-term consequences of these side-effects are a growing concern in light of guidelines recommending earlier treatment initiation and expanding use of Truvada for pre-exposure prophylaxis (PrEP).

Gilead Sciences' new TAF formulation produces fivefold higher concentrations of active tenofovir diphosphate in cells that harbour HIV, but drug levels in the blood remain much lower compared with TDF. This enables reduced dosing that is expected to have a less detrimental effect on the kidneys and bones.

Paul Sax from Brigham and Women's Hospital in Boston presented late-breaking results from a phase 2 study comparing TAF at 10mg and TDF at 300mg, both as part of a single-tablet regimen that also includes the integrase inhibitor elvitegravir, cobicistat (a pharmacoenhancer or 'booster') and FTC (emtricitabine). The TDF-containing coformulation is marketed as Stribild; the TAF version is not yet approved.

This double-blind, placebo-controlled trial included 170 previously untreated people with HIV who were randomly assigned (2:1) to receive the TAF or TDF coformulations once-daily for 48 weeks.

Almost all participants were men, more than two-thirds were white, nearly one-third were black and the median age was about 35 years. The median baseline CD4 cell count was about 390 cells/mm3 (though about 15% had less than 200 cells/mm3) and the median viral load was approximately 40,000 copies/ml. At study entry participants had normal kidney function, with a median estimated glomerular filtration rate (eGFR) of 115 ml/min. People with hepatitis B or C co-infection were excluded.

At this year's Conference on Retroviruses and Opportunistic Infections (CROI 2013), Andrew Zolopa reported 24-week interim data from the study, showing that 87% of people taking the TAF coformulation achieved HIV RNA below 50 copies/ml compared with 90% of those taking Stribild.

The 48-week response data presented at ICAAC showed little change: 88.4% of people in the TAF arm and 87.9% in the TDF arm achieved undetectable viral load in an intent-to-treat 'snapshot' analysis (90.2 vs 89.7%, respectively, in a missing=failure analysis). CD4 cell gains at 48 weeks were 177 and 204 cells/mm3, respectively. None of these differences were statistically significant.

More Stribild recipients discontinued due to lack of efficacy (3.4% vs none), but more TAF recipients stopped early due to adverse events (3.6% vs none) or had missing 48-week data (5.4 vs 1.7%).

A total of six participants – three in each arm – who experienced virological failure underwent resistance testing. No one in the TAF arm developed resistance, but two people taking Stribild showed double resistance mutations.

A total of 26 patients participated in a pharmacokinetic sub-study. The TAF coformulation produced trough (minimum) and area under the curve (total) tenofovir plasma concentrations of 11 ng/ml and 326 ng*hr/ml, respectively, compared with 83 ng/ml and 3795 ng*hr/ml with Stribild. Overall plasma exposure was 91% lower with TAF. Conversely, tenofovir diphosphate exposure in peripheral blood mononuclear cells was 5.3-fold lower with TDF than with TAF.

The TAF and TDF coformulations were both generally safe and well-tolerated, with most side-effects being mild or moderate. Most adverse events occurred at similar rates in both groups, but nausea was nearly twice as common in the TAF arm (21 vs 12%). There were no treatment-related serious adverse events in either arm.

Laboratory abnormalities were also generally comparable in the two treatment arms. However, more people in the TAF arm had abnormally high low-density lipoprotein (LDL or 'bad cholesterol'). Sax explained that tenofovir has a lipid-lowering effect in the blood, but this didn't happen to the same extent with TAF because its plasma concentration is so much lower.

Turning to kidney function, there was less change in eGFR over time in the TAF coformulation arm compared with the Stribild arm (-5.5 and -10.0, respectively). Other indicators of kidney function including protein in the urine (2.7 vs 5.2%), changes in serum creatinine (0.9 vs 3.4%) and two exploratory urine markers of proximal renal tubulopathy (retinol binding protein/creatinine ratio and beta microglobulin/creatinine ratio) also favoured the TAF coformulation.

Kidney biomarker changes have been attributed to cobicistat inhibiting renal tubule secretion, Sax noted. But it is not clear why this effect is smaller with TAF than with TDF, since the cobicistat dose in the two coformulations is the same. No cases of renal tubulopathy were seen in either arm and nor did anyone discontinue therapy due to kidney-related side-effects.

Looking at bone loss, bone mineral density, as measured by DEXA scans taken at 24 and 48 weeks, decreased less in the TAF arm than in the TDF arm at both the spine (-1.00 vs -3.37) and the hip (-0.62 vs -2.39). Furthermore, one-third of participants taking the TAF coformulation experienced no change in hip bone density compared with just 7% in the Stribild arm. Biomarkers of bone resorption and bone formation favoured TAF over TDF (procollagen type 1 N-terminal propeptide: 109 vs 169%; C-terminal telopeptide: 119 vs 178%). No fragility fractures occurred in either arm of the study.

A related poster presentation showed that TAF did not lead to unexpectedly high concentrations of tenofovir in bone-forming cells known as primary osteoblasts, and it did not have a cytotoxic (cell-killing) effect on these cells at clinically relevant concentrations in a laboratory study.

Treatment-naive participants taking the TAF coformulation had high levels of viral suppression over 48 weeks, comparable to those seen with Stribild, the researchers summarised. But people taking the TAF coformulation had a smaller decrease in eGFR and significantly smaller decreases in bone mineral density of the hip and spine.

Sax said that phase 3 studies are underway and researchers are making an "aggressive attempt" to enrol more women.