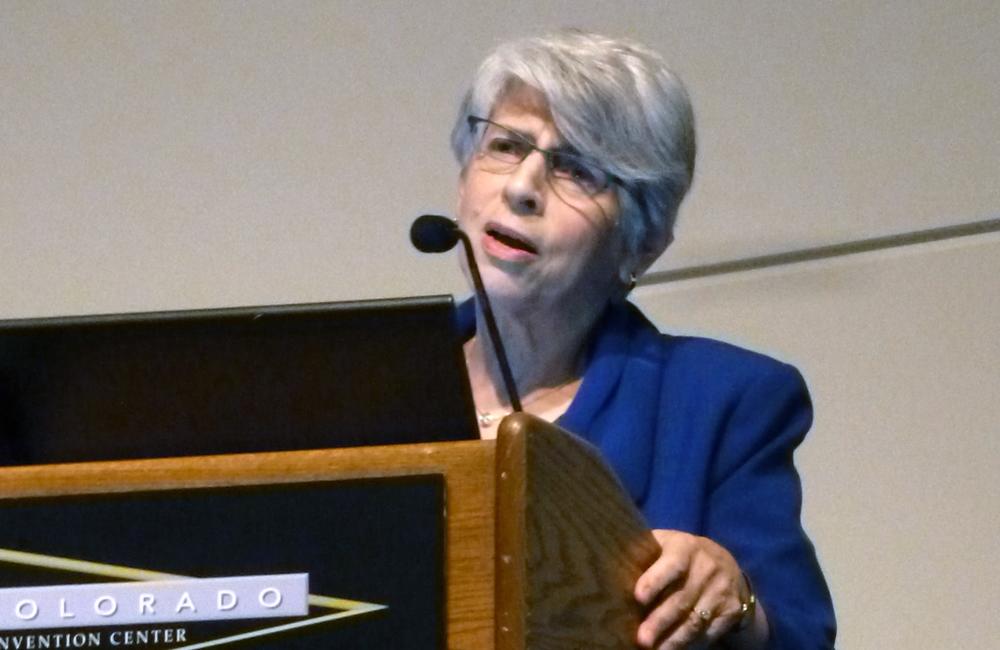 Judith Feinberg of the University of Cincinnati. Photo by Liz Highleyman, hivandhepatitis.com.
This article is more than 9 years old. Click here for more recent articles on this topic

ViiV Healthcare's dolutegravir, recently approved by the US Food and Drug Administration under the brand name Tivicay and currently awaiting European Medicines Agency approval, was the topic of several presentations at ICAAC.

Approval was based on favourable results from the phase 3 VIKING and SAILING trials in treatment-experienced patients and the SINGLE and SPRING studies in previously untreated people. SINGLE tested dolutegravir plus abacavir/lamivudine (the drugs in Kivexa) against Atripla (efavirenz/tenofovir/emtricitabine single tablet regimen), whilst SPRING-2 compared dolutegravir versus raltegravir (Isentress), the only other approved integrase inhibitor.

Judith Feinberg from the University of Cincinnati and colleagues presented findings from the FLAMINGO study comparing dolutegravir against ritonavir-boosted darunavir (Prezista), a potent protease inhibitor, in people new to antiretroviral therapy (ART).

This multicentre, open-label, non-inferiority study enrolled 484 treatment-naive adults with HIV. Most participants (85%) were men, a majority were white, about 20% were black and the median age was 34 years. At baseline, the median CD4 cell count was 395 cells/mm3, with 10% having <200 cells/mm3. One quarter had high viral load (HIV RNA >100,000 copies/ml) at study entry.

Participants were randomly assigned to received 50mg once-daily dolutegravir or 800/100mg once-daily darunavir/ritonavir. In addition, they received investigator-selected NRTIs, with 75% using tenofovir/emtricitabine (the drugs in Truvada) and 25% using abacavir/lamivudine (Kivexa).

The researchers looked at the proportion of study participants with undetectable viral load below 50 copies/ml at 48 weeks, along with safety, tolerability, health outcomes and viral resistance. The randomised study will last through 96 weeks, followed by a non-randomised extension phase.

By 48 weeks, 7% of people taking dolutegravir discontinued treatment compared with 12% taking darunavir/ritonavir. The most common reasons for stopping in both arms were adverse events and loss to follow-up.

In a "snapshot" analysis, 90% of people taking dolutegravir and 83% taking darunavir/ritonavir achieved undetectable viral load, with dolutegravir meeting the criteria for statistical superiority (p = 0.025). Results were similar in a per-protocol or as-treated analysis, 91% and 84%, respectively. Week 48 CD4 cell gains were the same in both arms: 210 cells/mm3.

Virological non-response was uncommon in both the dolutegravir and darunavir/ritonavir arms (6 and 7%, respectively). Dolutegravir's superiority was attributable to fewer early withdrawals due to side-effects or other reasons and better response among people with high viral laod. Among people with virological failure, primary antiretroviral resistance mutations were rare in both arms (<1%).

Both regimens were general safe and well-tolerated, with most side-effects being mild to moderate. Fewer people in the dolutegravir arm, compared with the darunavir/ritonavir, arm discontinued due to adverse events (1 vs 4%) and serious drug-related adverse events were uncommon (one vs none). The most frequent side-effects were diarrhoea (17 vs 29%), nausea (16 vs 18%) and headache (15 vs 10%).

Laboratory abnormalities were uncommon in both arms. However, people in the dolutegravir arm had significantly smaller increases in LDL 'bad cholesterol' (3.1 vs 14.1mg/dl) and were less likely to have moderate or worse LDL elevation (2 vs 7%). Small increases in serum creatinine – a potential indicator of kidney toxicity – were seen in the dolutegravir arm, which Dr Feinberg explained was due to its inhibition of a renal transporter protein.

Dr Feinberg noted that while this open-label study was not double-blind and did not include placebo controls in order to reduce pill burden, these findings were "entirely consistent" with response rates seen in previous trials. She also noted that response rates did not differ based on which NRTIs were used.

In a related report during the same session, Debbie Hagins from Chatham CARE Center in Savannah, Georgia, and colleagues looked at response rates among treatment-experienced participants in the SAILING and VIKING-3 trials according to sex, ethnicity and age.

The SAILING study compared 50mg once-daily dolutegravir vs 400mg twice-daily raltegravir in participants who had never used integrase inhibitors. One-third of participants were women, 42% were black and the median age was 43 years.

In SAILING, overall response rates were 71% with dolutegravir vs 64% with raltegravir. CD4 cell gains were "robust" in both arms. Virological efficacy was generally similar across sex, race and age groups in both treatment arms, though black people and people over age 50 had somewhat lower response to both regimens:

The researchers noted that, "the treatment differences for dolutegravir vs raltegravir within the SAILING subgroups were generally supportive of the overall finding of superiority in favour of dolutegravir at week 48."

In the VIKING-3 study, which looked at people with integrase inhibitor resistance, everyone received 50mg twice-daily dolutegravir, first as "functional monotherapy" for eight days at which point their background regimen was optimised. Just under one-quarter were women, 27% were black and the median age was 48 years.

Overall, 69% achieved undetectable viral load by week 24, with a median CD4 gain of 61 cells/mm3. Again, response rates were similar across the various subgroups, with a small disadvantage for black and older people:

Dolutegravir was well-tolerated overall and adverse events leading to withdrawal did not exceed 4% in any subgroup.

As described in a poster presentation, GlaxoSmithKline scientists evaluated the safety and tolerability of dolutegravir for HIV-positive people with severe kidney dysfunction.

Dolutegravir is metabolised by the UGT1A1 and to a lesser extent CYP3A enzymes, the researchers noted as background. Dolutegravir is mostly secreted in bile and eliminated in faeces, with about one-third being excreted in the urine.

In this small open-label study, participants with severe kidney impairment – creatinine clearance <30 ml/min, but not on kidney dialysis – received a single 50mg dose of dolutegravir. They were matched with healthy volunteers of the same sex, age and body mass index with normal kidney function (creatinine clearance >90 ml/min).

Overall, dolutegravir was well-tolerated. Drug levels overlapped in the two groups, and the researchers concluded that the small observed differences in mean pharmacokinetic exposures were not likely to be clinically significant and did not require dose adjustment in people with impaired kidney function. They added that while no data are available for people on kidney dialysis, this would not be expected to affect dolutegravir pharmacokinetics.

In an open-label study of 66 healthy HIV-negative volunteers, drug levels were equivalent in participants receiving the three-drug fixed-dose tablet and those taking dolutegravir and Kivexa separately. The fixed-dose combination was well-tolerated and was not affected by administration with a high-fat meal.

The researchers concluded that the fixed-dose co-formulation was bioequivalent to the drugs administered separately and could be given "without regard to meals". If this co-formulation is found to be safe and effective in further clinical trials, it could offer a one-pill, once-daily single-tablet regimen that does not contain tenofovir, which can cause kidney and bone toxicity.