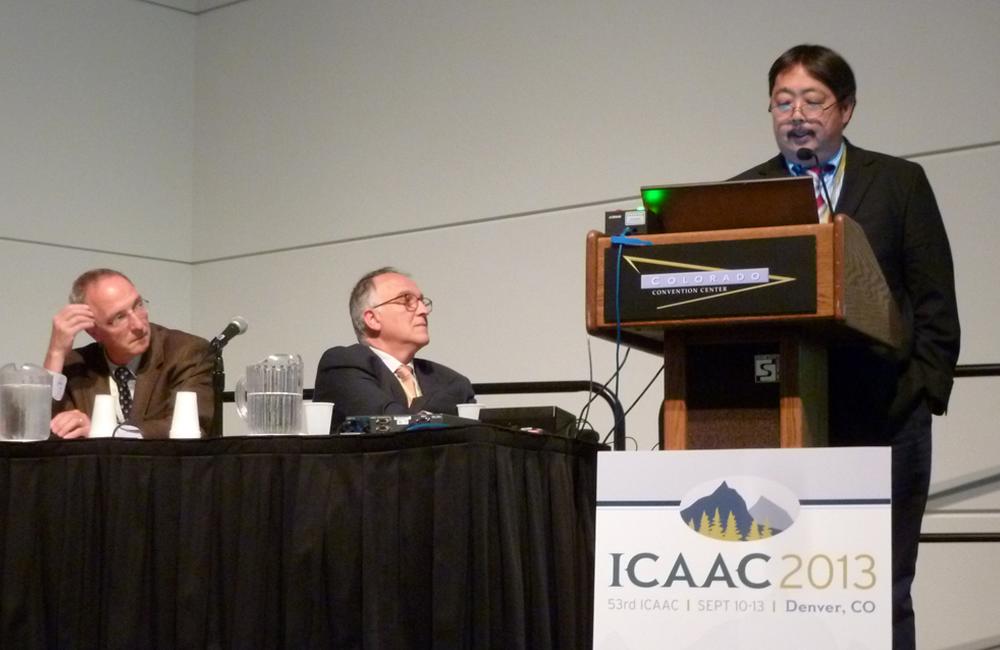 Two people whose CD4 T-cells were modified to make them resistant to HIV entry experienced substantial CD4 cell gains and were able to maintain viral suppression after interruption of antiretroviral therapy (ART), according to a late-breaker presentation yesterday at the 53rd Interscience Conference on Antimicrobial Agents and Chemotherapy (ICAAC) in Denver.

Sangamo BioSciences in California has developed a technique that uses a zinc finger nuclease to cut out the gene in CD4 cells that controls expression of the CCR5 co-receptor on the surface of cells. CCR5 is one of the gateways most types of HIV use to enter cells.

People with a naturally occurring genetic mutation known as CCR5-delta-32 – present in about 10% of Europeans – do not produce this co-receptor. Individuals with two copies of the mutation (one inherited from each parent) may be elite controllers who maintain undetectable viral load without treatment, whilst those with one copy may have lower than normal virus levels.

Researchers have attempted to replicate this natural phenomenon as a potential strategy for curing HIV. The Berlin patient, who received stem cell transplants to treat leukemia from a bone marrow donor with a double CCR5-delta-32 mutation, appears to be free of HIV several years after stopping ART.

The zinc finger technique aims to produce the same effect by using 'molecular scissors' to disrupt the normal CCR5-producing gene in chromosomes of T-cells (or ultimately the hematopoietic stem cells that give rise to all immune cells). A portion of CD4 cells are collected through apheresis, treated with the zinc finger protein in a lab and the modified and multiplied cells – known as SB-728-T – are then returned to the patient.

Researchers have studied the technique in several small cohorts in phase I/II trials. As previously reported, the procedure is generally well-tolerated and modified SB-728-T cells appear safe, with no notable safety concerns to date.

SB-728-T cells engrafted, multiplied and distributed themselves like normal T-cells. As previously reported, most participants experienced substantial increases in CD4 cells – including some individuals who had not previously achieved adequate immune recovery despite viral suppression on ART – and gains have been maintained up to three years.

Another study presented as a poster at this year's ICAAC showed reduction of the viral reservoir in participants in these earlier cohorts, as indicated by a median 0.6 log decrease in HIV DNA in peripheral blood T-cells at 12 months.

But the real test is whether the modified CD4 cells will be able to resist infection, which can only be determined by doing a careful analytic treatment interruption. Researchers at the University of Pennsylvania previously described one SB-728-T recipient who was able to maintain viral suppression during a 12-week treatment interruption, providing proof of concept.

At ICAAC, Dale Ando, Sangamo's Chief Medical Officer, reported results from a cohort of seven people who were CCR5-delta-32 heterozygous, meaning they carry one copy of the natural mutation and one copy of the normal CCR5-producing gene. In theory, it should be easier for gene therapy to produce T-cells completely lacking in CCR5 (known as biallelic knockout) if nature has already done half the job.

The study included five men and two women. All were white and ages ranged from 32 to 59 years. They had been HIV positive for two to 24 years. All were on stable ART with undetectable viral load and current CD4 counts of least 500 cells/mm3 (range 561 to 800 cells/mm3), but nadir (lowest-ever) levels reached as low as 88 cells/mm3. Viral set-points ranged from approximately 3600 to 245,000 copies/ml.

Each participant received a single SB-728-T infusion ranging from 9 to 20 billion cells, with approximately 25% cell modification on average. Once infused, biallelic modification was achieved in about 3% of peripheral blood CD4 cells, Ando said.

Eight weeks after the infusion, participants began a planned 16-week treatment interruption. The interruption continued until CD4 count fell below 350 cells/mm3 or HIV RNA viral load rose above 100,000 copies/ml on three consecutive weekly measurements. At the end of the planned interruption, people who still had undetectable viral load could remain off treatment until these thresholds were reached.

As seen in earlier cohorts, circulating CD4 cells shot up from the baseline level in the week after the infusion, with one person approaching 2500 cells/mm3. CD4 counts then stabilised at closer to normal levels, that were sustained for up to a year.

Two non-responders resumed ART after their viral load rose and stayed above 100,000 copies/ml. The third had no change in viral load during a 16-week interruption.

"This is the first study to demonstrate that functional control of HIV by the immune system may be possible by providing a population of CD4 T-cells made HIV resistant by biallelic modification of CCR5 (SB-728-T)," the researchers concluded. "The data demonstrate that the level of engrafted CCR5-modified, HIV-protected CD4 T-cells and the magnitude of the HIV reservoir are important factors in the functional control of HIV viremia during treatment interruption."

These findings support moving forward with a new cohort of people without the CCR5-delta-32 mutation – like the vast majority of people with HIV – who will undergo conditioning with the chemotherapy drug cyclophosphamide (Cytoxan) to get rid of some normal HIV-susceptible CD4 cells to make room for the new SB-728-T HIV-resistant cells.

Session moderator Pablo Tebas, who studied the aforementioned University of Pennsylvania patient, said these results are a "strong signal" that this gene therapy approach is effective. He suggested that the increase in viral load after stopping ART may be a necessary part of procedure, as resurgent virus may kill off normal CD4 cells and therefore select for the modified resistant cells.