One in six people with HIV treated in Poland is now from Ukraine, but many more still seem to get care back home
Gus Cairns 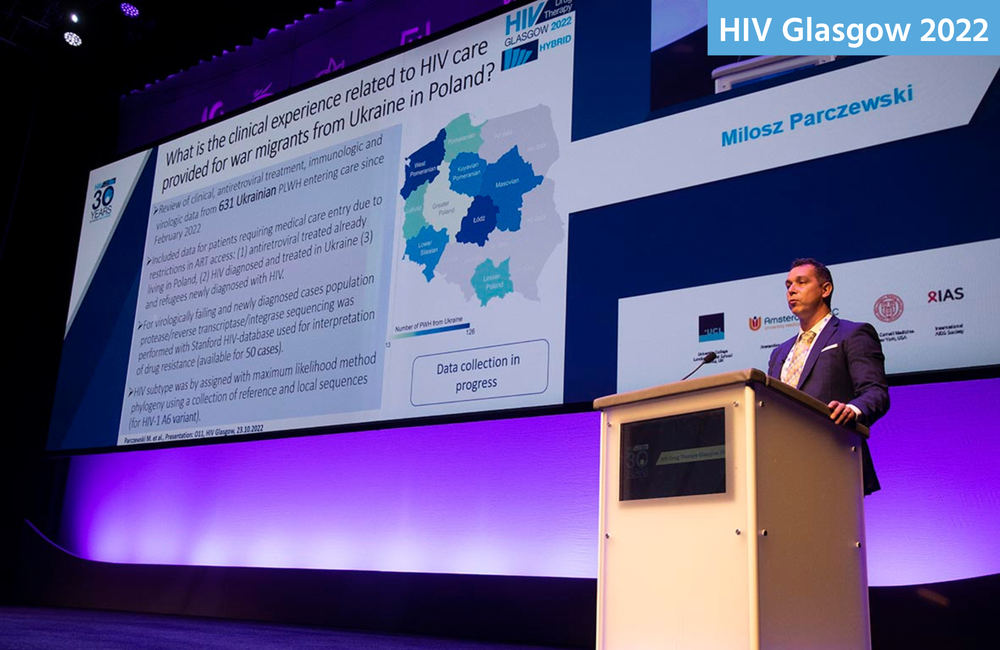 The number of refugees with HIV coming from Ukraine to Poland has so far raised the number receiving care in Poland by 16%, the International Congress on Drug Therapy in HIV Infection (HIV Glasgow) heard on Sunday.

This is fewer than expected. Ukraine, home to about 250,000 people with HIV, has nearly ten times as many people living with the virus as neighbouring Poland – which has received by far the highest number of refugees from the war with Russia (apart from those displaced into Russia).

This could be for several reasons. Some refugees do not plan to stay in Poland and may be on route to other countries where their refugee status has been accepted; some people may not wish to disclose their HIV status to people they are staying with in Poland; and some refugees have sought care at peripheral hospitals in eastern Poland that have not yet provided data.

But Dr Miłosz Parczewski, President of the Polish AIDS Society, who works at the HIV Centre in Szczecin in western Poland, told the conference that the main reason is probably that seeking refugee status in Poland is not necessarily incompatible with occasional visits back to the safer parts of Ukraine to continue HIV care.

He told aidsmap: “There is a stereotype of refugees as people with literally nothing to go back to.

“But in this case, the wife and children may leave while the husband stays. Ukraine has a less medicalised, more decentralised HIV treatment system that is easier to navigate than Poland’s and which is now dispensing treatment every six months. So I think a lot of people return to Ukraine now and then to see their families – and to visit their clinic.”

He told the Glasgow conference that although the numbers coming forward for care were lower than expected so far, the expected rigours of the forthcoming winter could swell numbers more, and the different demographics and health status of Ukrainian refugees were already making new demands on HIV care services.

One example is that in Poland’s HIV epidemic, 80% of infections are due to sex between men. Ukraine’s HIV epidemic, on the other hand, having started in people who inject drugs, is now dominated by heterosexually acquired infections. Seventy per cent of refugees arriving in Poland and registering for HIV treatment had acquired HIV heterosexually and, since three-quarters of Ukrainian war refugees are women, heterosexual women form half of the HIV-positive refugees coming forward for treatment.

This has also meant that the number of vertically infected children receiving antiretroviral therapy (ART) in Poland has almost doubled within a few months, from 70 to about 130.

The full figures are this: the UN High Commission for Refugees estimates that 7.65 million refugees left Ukraine between the start of the war on 24 February and 4 October this year – 17% of the population. Of those who have left, 4.2 million have officially registered as refugees in countries worldwide.

Poland has received more of these than any other country – about 1.4 million. This is twice as many as the next country on the list, Germany, with 700,000, and three times as many as Czechia with 442,000. The other countries receiving more than 100,000 are Italy, Spain, Bulgaria, the UK and France.

Some countries in the region have seen fewer refugees either because of their small size (such as Moldova) or their hostility to refugees (such as Hungary); this has meant they have tended only to be staging posts in an onward journey.

Ukraine has 260,000 people with HIV, while Poland has only 26,500, of whom 15,500 are on ART. Poland has only 17 ART treatment centres, mostly in major cities, while Ukraine used to have 390 spread throughout the country – 68 have been destroyed or heavily damaged, but there is still a functioning service despite the loss of many staff.

If the number of Ukrainians needing HIV treatment in Poland reflected HIV prevalence, one would expect at least 8000 people to seek medical help. Instead, so far only 2500 have come forward. Most of them were already diagnosed with HIV and on therapy. Some are people who were already living and working in Poland but who returned to Ukraine for their HIV care, but may now have switched care to Poland. Some are ‘passers-by’ on their way to another country and only needing short-term ART. 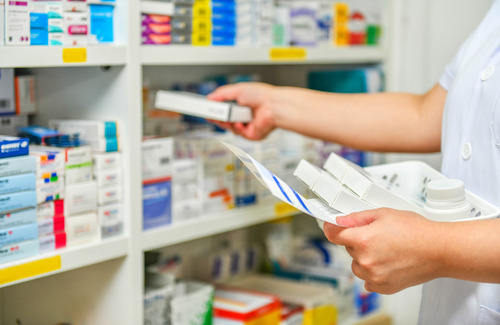 A large number however are people either having to make a permanent switch to HIV care in Poland (92% of those Parczewski reported on) or who were newly diagnosed in Poland (the remaining 8%). A sample of 631 people from the nine of Poland’s 16 provinces that have enough data, found that their average age was 40 and that 71% were women. Their median CD4 count was 568.

Twenty-nine per cent had antibodies to hepatitis C – about the same proportion as in Polish nationals with HIV. Of these 132 people, hepatitis C RNA was measured in 69 and 40% of them had detectable RNA, indicating active infection. Unsurprisingly 89% of people who had injected drugs had hepatitis C, compared to 21% of heterosexuals and 17% of gay men.

One of the most surprisingly complicated issues doctors treating the Ukrainians came across was that the ART combination pill taken by the majority of Ukrainians on ART is not available in Poland.

Seventy per cent of Ukrainians take ‘TLD’ – a fixed-dose combination of tenofovir disoproxil (TDF), lamivudine and dolutegravir produced by generic manufacturers. This is unavailable in Poland which, as member of the European Union, cannot legally supply generic dolutegravir.

Thirty-four per cent were maintained on one pill, by switching them to TAF/emtricitabine/bictegravir (Biktarvy).

Another 8% of Ukrainians were still on efavirenz-based combination pills and were mainly switched to TDF/emtricitabine plus dolutegravir or Biktarvy. Although 87% did not have to change from one class of HIV drugs to another, the bureaucracy and inconvenience to patients (especially as many faced language barriers) has been considerable. Belatedly, some TLD has been negotiated for newly arrived Ukrainian patients, but only the equivalent of a month’s supply.

The 52 Ukrainians who were newly diagnosed, Miłosz Parczewski told aidsmap, are likely to substantially underestimate the true total, as many of these new cases of HIV have been found in people who had no idea they had it, and have only been tested when presenting to general hospitals or primary care with other conditions.

These newly diagnosed people are on average younger (median age 30) and fewer are women (56%) than those already on ART. Their average viral load on diagnosis was 170,000 (5.23 logs) and their average CD4 count 123, with some single-figure CD4 counts; 77% had counts below 350 and were therefore diagnosed late.

Nineteen (36.5%) had AIDS-defining illnesses on diagnosis; five had pneumocystis pneumonia, four had active TB, three each had toxoplasmosis or AIDS wasting syndrome, and two each had systemic candidiasis or non-TB mycobacterial infections.

One interesting issue among those newly diagnosed and among Ukrainian refugees in general is that the HIV subtype most of them have is quite different to that in other European countries. In Poland it is mainly subtype B, the type widely seen in gay and bisexual men, among whom there was a large increase in Polish HIV cases between 2010 and 2018. In Ukrainian refugees, 88% have a ‘sub-subtype’ called A6, a variety mainly seen in heterosexuals in Russia that is an offshoot of the other subtype A varieties seen in east Africa.

One of the issues with subtype A6 was that it was not even known to exist until about 2010 and there have been questions about whether it more easily than other subtypes becomes resistant to some HIV drugs, especially integrase inhibitors. So far, however, the news is relatively good. Among a sample of Ukrainians tested for resistance, 27.5% of those on treatment had acquired resistance to both the NRTI and NNRTI drug classes, and 6.4% to protease inhibitors. Among those new to ART, 9.7% had resistance to NNRTIs (they were infected with virus that was already resistant) but there was no resistance to other classes. There was no evidence of integrase resistance in anyone, either transmitted or acquired on treatment.

The data we have so far on Ukrainian refugees, in Poland at least, looks encouraging. Thanks partly to the courageous maintenance of HIV services back in Ukraine, there is little evidence of substantial numbers of people dropping out of HIV care – 8.3% in Parczewski’s sample of 631 were lost to follow-up, but it is in the nature of being refugees that people move on. The medical history data people bring from Ukraine is often sparse and there may be many more refugees around whose HIV is currently unsuspected and unreported and who are still receiving care back in their old country, and others still undiagnosed. We will only find out a truer figure “either if people become ill or if their services back in Ukraine start to fail,” Parczewski said.

The individual stories of migrant women are essential in understanding if HIV healthcare strategies and programmes are working.
The Conversation
30 Nov 22
PrEP programmes & uptake

Vadym is one of an estimated 14 million people who have had to flee their homes in search of safety due to the war in Ukraine. Now in the city of Lviv in the west of the country, safety and stability are still out of reach.
The Global Fund
29 Nov 22
Migrants, refugees & displaced people

The authors aimed to assess the needs of refugees and foreign nationals living with HIV in the Russian Federation who are in a difficult situation due to the military operation, in particular their need for medical and other care, as well as their level of access to required services or to receive care.
Regional Expert Group on Migration and Health
28 Nov 22
Health services & systems

Climate change and HIV: what do we know so far?