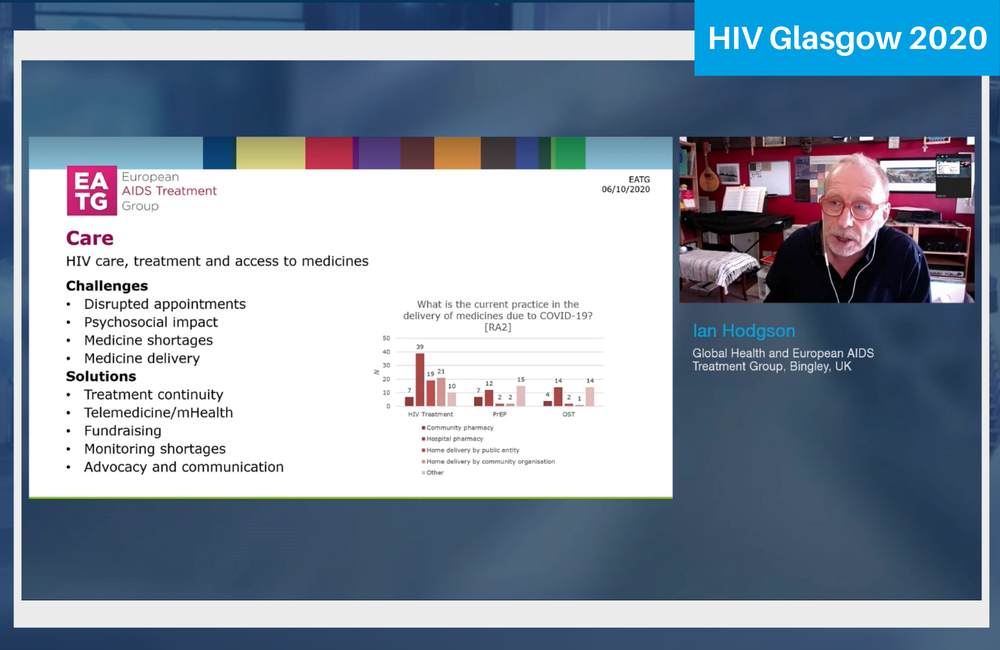 A series of rapid-response surveys by the European AIDS Treatment Group (EATG) has uncovered significant changes in access to HIV testing, PrEP and HIV treatment during the course of the COVID-19 epidemic, the HIV Glasgow 2020 conference heard last week.

EATG’s Ian Hodgson, presenting the findings that EATG have published in three bulletins, said that the findings did not just document the impact of the COVID epidemic on HIV services, but also showed that a number of community organisations have organised innovative solutions to these.

Hodgson told the conference that the challenge now was for HIV and other community organisations to change from an emergency to a strategic response to the COVID pandemic. Funders’ priorities might change permanently, he said, and organisations might need to change their aims and priorities to address the needs of the post-COVID world.

EATG conducted a series of rapid-response surveys with EATG members and affiliates almost from the start of the COVID-19 emergency in Europe, with the first survey performed from March to early April, the second from April to May, and a third, whose findings have yet to be fully analysed, in August. A fourth is planned for late October.

In many places there had been an increase, or at least continued availability, of self-testing. Fourteen respondents to the second survey (about 25%) said HIV self-testing had never been available in their country or area and another five said kits were in short supply. About 45% said HIV test kits were provided by local non-governmental organisations, and the same proportion said they could be bought online. About 30% said they were available at high street pharmacies and three said their country provided them in vending machines in some places (these percentages are non-exclusive).

In some countries NGOs had put on campaigns to increase awareness of self-testing options. One example was a community NGO which started a programme offering online self-testing, counselling, a 24-hour hotline, and a linkage to care service.

A bigger and less anticipated impact was on testing for sexually transmitted infections (STIs). Half of respondents said that STI testing in their area was only available for acute infections and emergencies, not for routine tests. Only 25% said STI services has been sustained at something like their former level. However, this had been to some extent balanced by a reduction in demand, possibly because STI incidence had gone down, but also possibly because people found it difficult to travel.

With regard to PrEP, some respondents from countries that had only recently introduced PrEP said their health service had stopped providing it. Others were finding significant delays in access.

Twelve respondents to the first survey said PrEP was still available from hospital pharmacies and seven from community-run pharmacies. Four people said is was being delivered to users either by the healthcare system or a community organisation. But 15 said that people were accessing PrEP in “other” ways – either buying it online or obtaining it informally from friends.

A very similar pattern was seen as regards the availability of opiate substitution therapy.

Respondents from nearly all countries reported disruption to normal HIV appointments, which were either postponed, with extra supplies of antiretroviral therapy (ART) being sent, or appointments being provided on the phone.

In a number of countries, the diversion of physicians into COVID care had left a severely inadequate service. One respondent from Greece commented: “The community has been left with practically no doctors to follow us up.”

Countries where HIV care was organised around infectious disease departments appeared more vulnerable to this loss of HIV physicians to COVID than countries with specialist HIV clinics.

Thirty-nine respondents to the second survey said ART was still being provided by hospital pharmacies, but there had been an increase of provision by community pharmacies. Home delivery, either organised by the health sector or by community organisations, was mentioned by 40 respondents. Not all countries could provide longer prescriptions, partly due to drug shortages caused by logistical difficulty in moving supplies during lockdown. This had affected Kazakhstan, Russia and Switzerland.

Regarding co-infections, there was evidence that linkage to care for people diagnosed with or needing treatment for hepatitis C was being severely compromised. In a number of countries TB testing was also being compromised because X-Ray machines and other diagnostic technologies were being repurposed for COVID diagnosis and treatment.

Finally, many respondents were extremely worried about the adequacy and sustainability of mental health services. People with HIV, who already have higher psychological support needs than the general population, were additionally being impacted by the general anxiety and uncertainty of the COVID pandemic. Not being able to travel has had real impact on access to more intensive, in-person support services.

The EATG surveys did provide evidence that community and healthcare organisations were responding to the pandemic with innovative solutions. These ranged from extended prescriptions to community-based organisations providing more access points to services where the usual peripheral clinics had been closed and services centralised to one hub. Healthcare workers were taking drug delivery into their own hands and bringing people their drugs in cars and, in one UK example, on bicycles. Community pharmacies had been opened or enabled to dispense ART.

Funding, however, was also an issue that community organisations needed to strategise about. Funding models would probably never revert to the situation before COVID, and funders will, especially with the need to economise, change their favoured models of service delivery. Organisations that support people with or at risk of HIV needed to start planning for the 'new normal' now.

Hodgson I. Overview of services and impact on prevention and care and psychosocial implications on PLHIV. HIV Glasgow 2020 virtual conference, oral presentation O241.

Greenhalgh F et al. How has the COVID-19 response changed medicine deliveries for people living with or at risk of HIV? HIV Glasgow 2020, poster p144.

Australia: Free access to treatment for all people living with HIV, including those Medicare-ineligible

From 1st July 2022, people living with HIV in Australia who are ineligible for Medicare will be able to access their HIV treatment free of charge from government-funded hospital pharmacies.
Ending HIV
1 Jul 22
Access to healthcare

Advocates say that not expanding Medicaid in 12 US states is harming people with HIV.
TheBody
24 Jun 22
Injectable & long-acting PrEP

Is HIV care for most-at-risk groups as effective in the community as in a facility?

An evidence review from sub-Saharan Africa has found that HIV services delivered in community settings by and for key populations are at least as effective as facility-based care.
Be In The Know
17 Jun 22
More editors' picks