Vaginal rings, films, inserts or gels – it’s all about choice 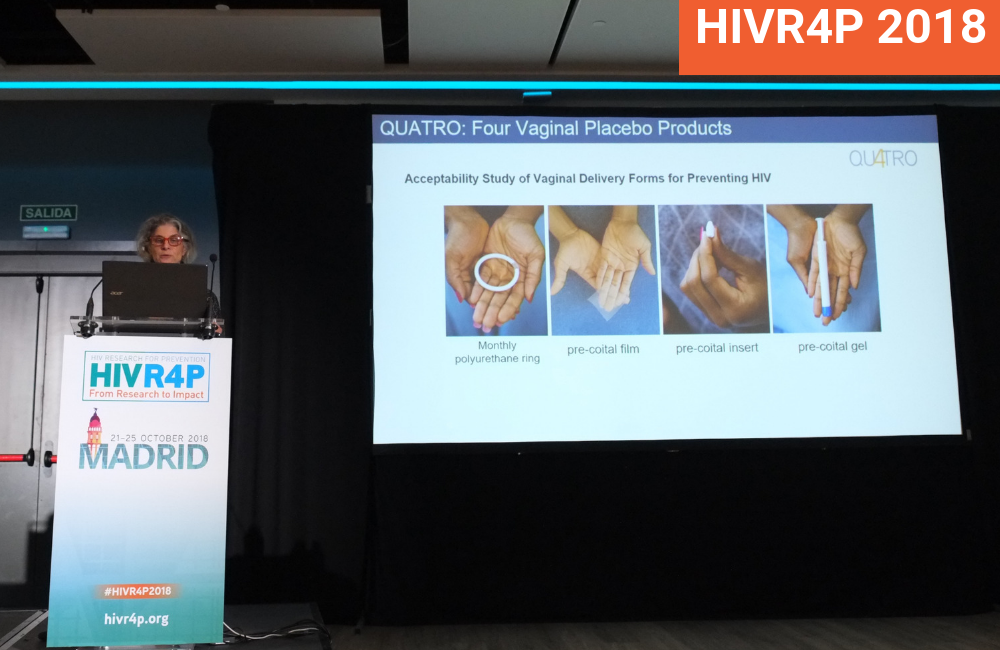 There is no single HIV prevention technology which suits everyone – young African women who have tried four different vaginal products make different choices, with no one product being much more popular than the others, researchers told the HIV Research for Prevention conference (HIVR4P 2018) in Madrid this week.

‘Choices’ was the buzzword of the conference. Activists took to the stage during both the opening and closing sessions to express their concern about decisions by the US National Institutes of Health to reduce funding for the development of microbicides and other topical products. Investment will be concentrated on systemic and long-acting products, such as injectables and implants, as well as vaccines (which have always received the lion’s share of funding).

Too often, health products are developed and brought to communities without stopping to ask whether the product is something people want and will use. A small number of researchers and funders are attempting to rectify this problem by conducting detailed studies with people at risk of HIV to understand their preferences, some of which was presented at HIVR4P.

The QUATRO study enrolled 200 women aged 18 to 30 in Harare (Zimbabwe) and Durban (South Africa). Each month for the first four months of the study, women were randomly allocated to be given a product to try – an intravaginal ring, a vaginal film, a vaginal insert (a small tablet that rapidly disintegrates) or a vaginal gel. They were asked to use the ring continuously for the month and to take a vaginal swab each week. For the other three products, they were asked to use them at the time of sex, at least once a week, and take a vaginal swab a few hours later.

Each of the products was a placebo, with no active ingredient. This allowed the researchers to put aside issues of efficacy and side-effects (which they already knew were important to end users) and pay attention to other aspects of product design and acceptability.

The majority of participants were aged 18 to 24, almost all had a primary partner and most had children.

After one month of use, participants were asked how much they liked the product, rating it from 1 (dislike very much) to 5 (like very much). The mean scores were very similar for each one – 3.3 for the ring, 3.8 for the film, 3.7 for the insert and 3.5 for the gel. For each one there were some users who rated it very poorly as well as users who rated it very positively.

And after trying all of them, the women were asked to rank them in order of preference. Again, there was no one product which stood out above all others:

There were some important differences between respondents in the two cities – the vaginal film was much more popular in Harare than in Durban, whereas the reverse was true for the vaginal gel. This suggests that if and when products are rolled out across several African countries, there may be significant variations in uptake in different regions and in different social groups.

Importantly, ratings for all products improved over time and with experience of use. This was especially the case for the ring – when women were first told about the ring at study entry, many were sceptical. Ratings improved after watching a video demonstrating all products, and then again after actually using it.

In the fifth month of the study, women were given the product that they had rated most highly and asked to use it each time they had vaginal sex. Analysis of returned vaginal rings showed that 78% had used them for the full month. Analysis of vaginal swabs suggested that 38% of film users, 58% of insert users and 77% of gel users did use them during sex.

The final stage of the research was a ‘discrete choice experiment’. This involved the women being asked to state their preferences when presented with alternative but hypothetical products. Each alternative was described by several attributes; the responses were analysed to determine which attributes significantly influenced their preferences.

The efficacy of the product in preventing HIV infection was the most important attribute. In addition, women preferred a multi-purpose product that provided protection against pregnancy as well as HIV. They favoured products that caused some vaginal wetness over ones that caused a lot of wetness; they favoured products inserted with a reusable applicator over ones inserted with a finger. They disliked a product that needed to be used every day. Whether or not a sexual partner would notice the product was not a significant factor.

The discrete choice experiment showed that it is the combination of attributes that influenced choice, rather than any single one. For example although product efficacy was very important, it is not the only one that mattered.

A hypothetical product which provided 80% efficacy but which also had a number of attributes that tend to be seen negatively (inserted every day, with a finger, causing a lot of wetness, not preventing pregnancy, noticeable by a partner) was chosen by 27% of participants. Lowering the efficacy to 50% but positively modifying all of the other attributes resulted in a hypothetical product that would be chosen by 73% of participants.

Ariane van der Straten, one of the researchers, summed up the overall picture. “Young women want choice,” she said. “They want a product that is low burden, provides peace of mind, is fool proof and multi-purpose, but what form this product takes does vary.”