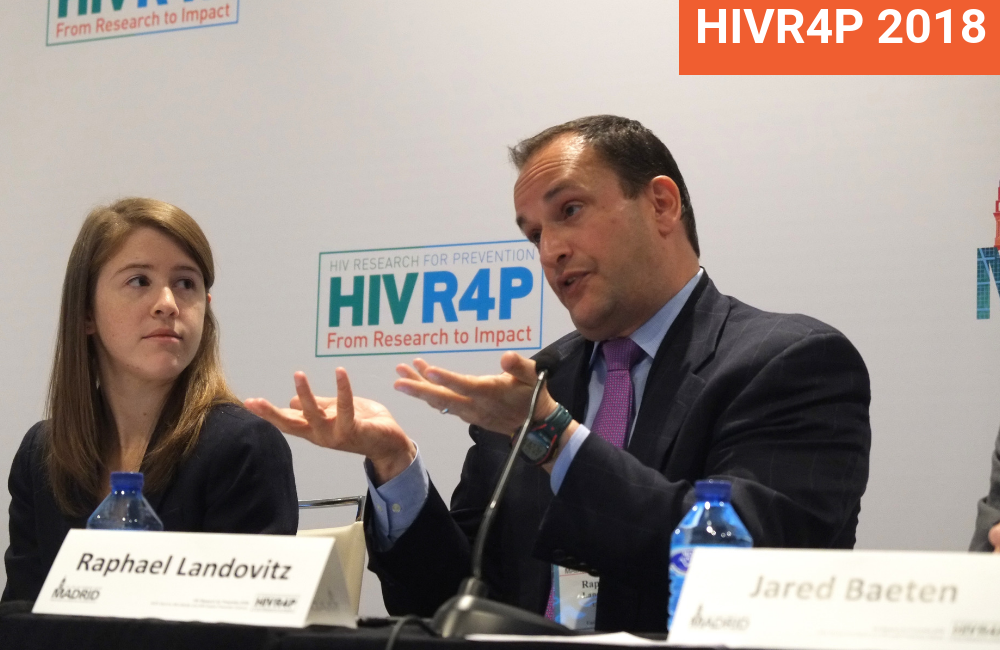 Oral pre-exposure prophylaxis (PrEP) based on tenofovir disoproxil fumarate/emtricitabine (Truvada) has set a high bar for prevention effectiveness, but a range of alternative PrEP products are in development, Raphael Landovitz of the University of California told the HIV Research for Prevention conference (HIVR4P 2018) in Madrid last week. They variously promise less frequent dosing, multi-purpose uses and different modes of action, although the development process for each has its challenges.

Speaking at the same plenary session, Craig Hendrix of Johns Hopkins University made an eloquent plea for research to continue into PrEP formulations which are topical (applied vaginally or rectally, at the site of potential HIV exposure) rather than systemic (spreading the drug throughout the body). Topical products such as films, inserts or gels would provide immediate, rather than long-term protection. However, the US National Institutes of Health is reducing its investment in topical PrEP research.

Landovitz said that there had been hope that the CCR5 entry inhibitor maraviroc, an oral tablet that is sometimes used as part of antiretroviral therapy, could also be used as part of PrEP. However, a study found that rectal tissue samples of men who had taken maraviroc could be more easily infected with HIV in a test tube than tissue samples of men taking other PrEP regimens. For this reason, maraviroc has not been taken forward for further development.

Tenofovir alafenamide (TAF) is a newer, modified formulation that causes less kidney and bone side-effects than tenofovir disoproxil fumarate (TDF) and is included in a number of fixed dose combinations for antiretroviral therapy. Landovitz said that while TAF is an attractive option for HIV treatment, it remains to be seen whether it will work well for PrEP. TAF delivers high levels of tenofovir to cells, without requiring high levels in blood plasma. This explains the reduced side-effects, but could also mean that protective levels of the drug are not reached in rectal and vaginal tissues.

It’s not clear whether the key determinant of prevention efficacy is drug levels in plasma (low with TAF), tissue (low with TAF) or cells (high with TAF). The efficacy of TAF as part of PrEP will be unknown until the phase III DISCOVER trial is completed. The trial is comparing tenofovir alafenamide/emtricitabine (Descovy) and tenofovir disoproxil/emtricitabine (Truvada) as PrEP regimens.

Landovitz addressed broadly neutralising antibodies (bNAbs) as part of his talk. These rare antibodies can neutralise multiple genetic variants of HIV and may have a role in HIV treatment and (hopefully) remission. In addition, vaccination with bNAbs may have a role in HIV prevention. The Antibody Mediated Prevention (AMP) studies are investigating whether infusion of one of these antibodies could provide passive immunisation and protect against HIV infection. Landovitz said the study will generate important data that will inform future vaccine development. However, a combination of several antibodies (rather than the single antibody being tested in AMP) would probably be needed to fully defend against repeated viral exposures.

Landovitz said that views were polarised about long-acting injectable formulations of PrEP. They may solve some, but not all the adherence challenges of oral PrEP. As they cannot be removed from the body in the case of intolerance, a lead-in period taking the same drug as oral tablets is recommended to check for side-effects. Moreover, after a last dose is taken, there is a lengthy, slowly declining ‘tail’ in which drug levels are unlikely to be protective but may still cause problems in relation to side-effects, drug-drug interactions and – should HIV infection occur – the selection of drug-resistant strains.

The non-nucleoside reverse transcriptase inhibitor rilpivirine was a candidate for injectable PrEP, but is no longer being taken forward. One participant in an early trial developed drug resistance after acquiring HIV during the long tail. It still holds promise for use as part of HIV treatment.

The injectable form of the integrase inhibitor cabotegravir is being developed both for HIV treatment and for PrEP (in the latter case, with dosing every eight weeks). In another presentation at the conference, Landovitz showed that cabotegravir can remain in the body for as long as three years after the last injection. Two large phase III studies, HPTN 083 and HPTN 084, will tell us whether cabotegravir is efficacious – as well as whether the long tail does cause problems with drug resistance. Landovitz said that long-acting injectables are likely to become available imminently – scientists, policy makers and advocates need to be prepared to ensure equitable access.

Long-acting implants may not have the same drawbacks as injectables. Similar to a contraceptive implant, the device is placed below the skin and provides a slow, continuous release of the drug over several weeks or months, without creating a long tail. It can be removed in the event of side-effects or if the user wants to stop.

The technology of implants is progressing rapidly, with several different devices in development. One particularly exciting aspect is the potential for an implant to be a multi-purpose technology, delivering a contraceptive or another medication alongside PrEP. Early studies are working on implants to deliver TAF, cabotegravir and the new nucleoside reverse transcriptase translocation inhibitor MK-8591 (also known as EFdA).

Landovitz said that early work on microneedle patches was promising. The patch would work by painlessly penetrating the top layer of skin to deliver a drug and then dissolving; a study into a patch for cabotegravir is underway.

Turning to topical products, vaginal rings are designed to be worn inside the vagina for a month at a time; women can insert and remove the devices themselves. The dapivirine vaginal ring has demonstrated partial efficacy and an ongoing open label study suggests that use of the ring has increased since study participants have been told that they are using an active product that has already been through clinical trials. It is currently under review by regulatory agencies.

Rings containing other antiretrovirals have also been studied and the conference heard about work to develop a multi-purpose ring that would also provide the contraceptive levonorgestrel. Craig Hendrix added that he is particularly interested in the development of the ‘pod’ ring – this has holes which could take numerous drugs, including antibiotics against STIs and contraceptives, and so would be ideal for multi-purpose use.

A vaginal film is a small product a little bit like a fresh breath strip. A woman can easily insert it herself and as it dissolves rapidly on contact with moisture, a sexual partner would be unlikely to notice it. Acceptability has been high among the thousand or so women who have taken part in early studies. The films achieve high levels of drug concentration in the vaginal mucosal tissues, without unnecessary exposure of the whole body to the drug. They could be engineered either to protect against sex within a few hours (for on-demand use) or for longer a period of time.

Similarly, vaginal or rectal inserts are small, fast-dissolving tablets or suppositories that might work in both body compartments. Hendrix noted early studies into inserts using the gp120 entry inhibitor DS003, a protein derived from algae called griffithsin and tenofovir alafenamide/elvitegravir.

The development of rectal gels has not yet stopped, Hendrix said – there are eight products which have recently begun phase I studies or will soon do so. He remains optimistic about their potential – scientists have a much greater understanding of the safety, pharmacokinetics, pharmacodynamics and user acceptability of potential products than was the case when the first tenofovir gels for vaginal or rectal use were developed, he said. The rectal-specific formulation of tenofovir tested in the CHARM-01 and CHARM-02 studies was worth taking forward, he suggested.

Moreover, delivering PrEP in the form of a rectal douche would be ‘behaviourally congruent’ – people would not need to make substantial changes to their behaviour as the PrEP drug would be added to a product that many people use anyway. Similarly, adding PrEP to a lube would be behaviourally congruent, but there are more challenges in developing a PrEP lube.

Craig Hendrix called on the National Institutes of Health, the HIV Prevention Trials Network and other actors to ensure that topical products can be chosen for PrEP.

He asked: “I wonder how much this increase will be for every additional product we license for PrEP?”.

View the presentation slides on the conference website (with audio).

View the presentation slides on the conference website (with audio).