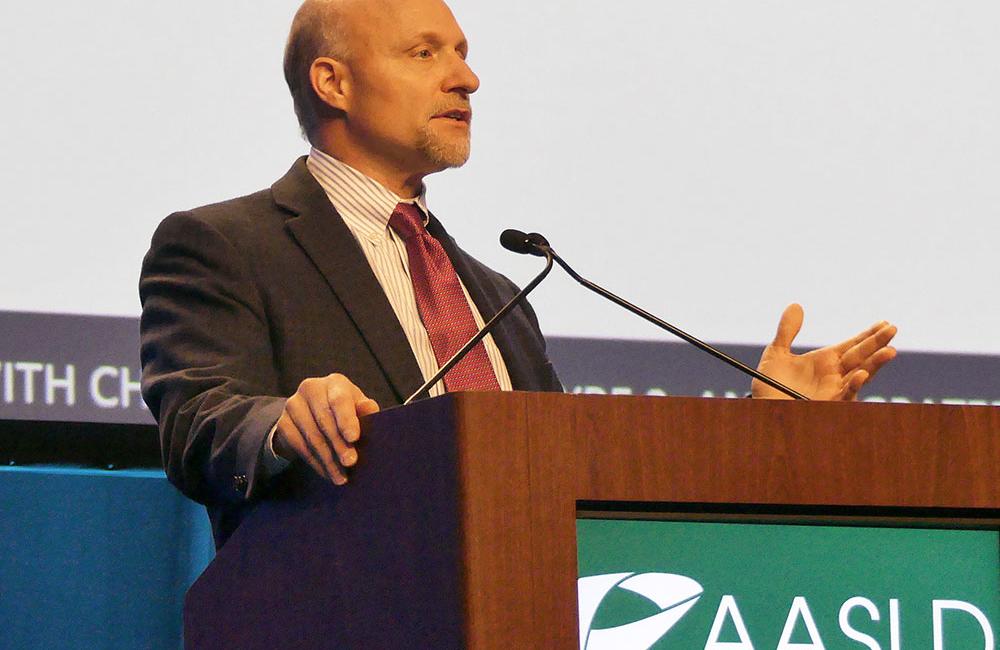 Glecaprevir and pibrentasvir, the two drugs in the recently approved Maviret co-formulation, demonstrated high sustained response rates for people with chronic hepatitis C virus (HCV) genotype 3 and for people with liver cirrhosis, according to a pair of reports presented at the 2017 AASLD Liver Meeting this week in Washington, DC.

Direct-acting antivirals used in interferon-free regimens can now cure most people with chronic hepatitis C virus, including people who were previously considered difficult to treat, such as those with genotype 3, advanced liver or kidney disease, or HIV/HCV co-infection.

AbbVie's Maviret (marketed as Mavyret in the US), which was approved in August, contains the HCV NS3/4A protease inhibitor glecaprevir and the NS5A inhibitor pibrentasvir. Both drugs are pangenotypic, meaning they are active against all HCV genotypes.

Steven Flamm of Northwestern Feinberg School of Medicine in Chicago and colleagues performed an integrated analysis of efficacy and safety data from phase 2 and 3 clinical trials of glecaprevir/pibrentasvir for previously untreated people with HCV genotype 3, either without cirrhosis or with compensated cirrhosis.

The analysis included seven studies in the ENDURANCE, EXPEDITION, SURVEYOR and MAGELLAN programmes, with a total of 571 participants. About 60% were men, around 90% were white and the mean age was approximately 48 years for people without cirrhosis and 56 years for those with cirrhosis. Almost all (99%) had HCV subtype 3a.

Among the people without cirrhosis, about 15% had advanced (stage F3) fibrosis. Some of the trials included people with HIV, advanced kidney disease (EXPEDITION-4) and transplant recipients. Two-thirds of participants had a history of injection drug use, 17% were on opiate substitution therapy and recent illicit drug use was not excluded. About a quarter had NS5A resistance-associated variations at baseline.

Of the people without cirrhosis, 208 received once-daily glecaprevir/pibrentasvir for 8 weeks and 294 were treated for 12 weeks. All of the 69 people with cirrhosis received the 12-week course. None of the participants used ribavirin. The endpoint was sustained virological response, or undetectable HCV RNA at 12 weeks post-treatment (SVR12).

In the pooled analysis, 95% of participants without cirrhosis who were treated for 8 weeks and the same proportion of those treated for 12 weeks achieved SVR12. After excluding people with non-virological treatment failure in a modified analysis, cure rates rose to 98% and 99%, respectively. There were five relapses in the 8-week group and four in the 12-week group. The researchers concluded that for people without cirrhosis, there was no additional benefit of extending treatment from 8 to 12 weeks.

Among people with cirrhosis treated for 12 weeks the SVR12 rate was 97%, rising to 100% after excluding non-virological treatment failures. There were no relapses.

People with stage F3 fibrosis had a slightly, but not significantly, lower response rate using 8 compared to 12 weeks of therapy (94 vs 100%), a difference not seen among those with absent to moderate (F0-F2) fibrosis.

Response rates did not differ significantly based on pre-treatment HCV viral load, opioid substitution therapy use or recent illicit drug use. All African-American patients were cured (a group that did not respond as well to interferon-based therapy).

Glecaprevir/pibrentasvir was generally safe and well tolerated, with no drug-related serious adverse events and three treatment discontinuations due to adverse events. The most common events reported by at least 10% of individuals were headache (19-24%), fatigue (10-19%) and nausea (10-13%).

These findings, Dr Flamm said, support recent changes to US HCV treatment guidelines that add Maviret as a recommended regimen for first-line treatment of people with HCV genotype 3, without the need for baseline resistance testing or addition of ribavirin. Despite the slightly lower response rate for people with advanced fibrosis, he said he is confident that an 8-week regimen is adequate for these people.

Participants had cirrhosis according to liver biopsies, Fibroscan imaging or the FibroTest biomarker index, but they had no history of liver decompensation. Most had a baseline Child-Pugh score of 5 (Class A). A small number (6%) had advanced chronic kidney disease.

A majority of participants (59%) were being treated for the first time, while the rest had been unsuccessfully treated with interferon-based therapy, sofosbuvir (Sovaldi) plus ribavirin, or HCV protease inhibitors or NS5A inhibitors.

Most study participants (n = 245) were treated with glecaprevir/pibrentasvir for 12 weeks, with the remaining 63 receiving a 16-week course. The different treatment durations were used in different studies and they were not compared head-to-head. Again, no one received ribavirin.

In the pooled analysis, the overall SVR12 rate was 96%, rising to 97% in a modified analysis that excluded people with non-virological treatment failure. There were five viral breakthroughs during treatment and three post-treatment relapses. By genotype, SVR12 rates were 94% for genotype 1, 97% for genotype 3 and 100% for genotypes 2, 4, 5 and 6.

Again, treatment was safe and well tolerated, with no drug-related serious adverse events and two events leading to treatment discontinuation. Here too, the most common adverse events were fatigue (19%), headache (16%) and nausea (10%). There was no increase in the frequency or severity of side-effects compared with those seen in people without cirrhosis, even though glecaprevir levels were about twice as high in people with cirrhosis, Dr Gane said.

"This integrated analysis supports the high efficacy and favourable safety profile of glecaprevir/pibrentasvir in patients with HCV genotypes 1-6 infection and compensated cirrhosis," the researchers concluded.