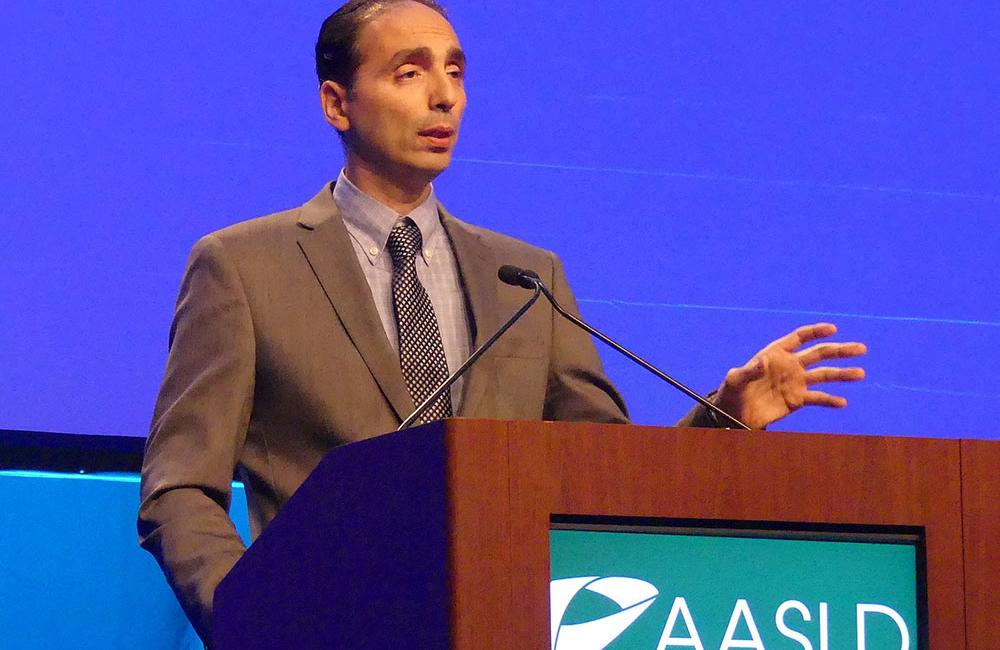 People who achieved a sustained response to hepatitis C treatment lowered their risk of hepatocellular carcinoma by around 70%, regardless of whether they were treated with new direct-acting antivirals (DAAs) or older interferon-based therapy, according to study results presented at the 2017 AASLD Liver Meeting last week in Washington, DC.

"It doesn’t matter how you eradicate hepatitis C, you get a similar reduction in liver cancer," George Ioannou of the University of Washington told reporters at an AASLD press briefing.

The apparent increase in liver cancer risk seen in some recent studies likely reflects the fact that people with hepatitis C who have more advanced liver disease can now be treated in the DAA era, press conference moderator Norah Terrault of the University of California at San Francisco suggested.

Over years or decades, chronic hepatitis C virus (HCV) infection can lead to serious liver disease including cirrhosis and hepatocellular carcinoma (HCC), a type of primary liver cancer. Successful hepatitis C treatment with interferon is known to reduce the risk of liver disease progression and liver cancer, and experts expected the same to be true for the more effective DAAs.

However, at the 2016 EASL International Liver Congress, Italian researchers reported the first data suggesting that people who achieve sustained virological response (SVR) to DAA therapy – undetectable HCV RNA at 12 or 24 weeks after finishing treatment – might be at greater risk for liver cancer, although this was limited to cancer recurrence in people who'd already had HCC.

In contrast, a study presented at the 2016 Liver Meeting found that treatment with DAAs was not linked to higher HCC risk in an Italian cohort. And a systematic review and meta-analysis of more than 40 studies, presented at this year's International Liver Congress, showed that people treated with DAAs do not appear to have a higher risk of developing liver cancer than those treated with interferon.

To add to this evidence, Ioannou and colleagues looked at the effect of HCV eradication on the incidence of HCC in the interferon and DAA eras in the US Veterans Affairs (VA) healthcare system. The researchers only looked at new liver cancer, not HCC recurrence.

The VA is the largest integrated health system providing hepatitis C care in the US. It has gone from about 174,000 patients with HCV in 2013 to less than 60,000 in 2017 thanks to the advent of DAAs, according to Ioannou. People generally stay within the system, so it's possible to track those who receive antiviral treatment over the many years it takes to develop liver cancer, which cannot be assessed in the short randomised clinical trials that supported DAA approval.

This retrospective cohort study included 62,354 people with hepatitis C who underwent treatment with more than 83,000 antiviral regimens – some were treated more than once. Of these, 35,871 (58%) received interferon-based regimens without DAAs, 4535 (7%) received interferon plus early DAAs and 21,948 (35%) used interferon-free DAA regimens. In the latter group, a majority used sofosbuvir/ledipasvir (Harvoni). Follow-up continued to June 2017 and ranged from 2 to 18 years.

The researchers identified 3271 cases of HCC that were diagnosed at least 180 days after starting hepatitis C therapy, suggesting they were not present before treatment. About half of these were in people with cirrhosis.

After adjusting for more than 20 factors including demographics, HCV genotype, HIV or hepatitis B co-infection and liver disease severity, sustained response to treatment was associated with a 68% decline in the risk of new HCC among people without cirrhosis and a 50% reduction among those with cirrhosis.

Achieving SVR was associated with a statistically similar decrease in liver cancer risk whether people were cured with interferon without DAAs (68% reduction), interferon plus DAAs (52% reduction) or DAAs only (71% reduction).

"Receipt of DAAs is not associated with increased HCC risk compared to receipt of interferon," the researchers concluded.

A limitation of this study is the shorter follow-up period for people treated with DAAs. Ioannou said he could only speculate about whether the reduction in HCC incidence after successful DAA treatment would continue, but "we don't see any plateauing in the curves." Over the longer follow-up period for people successfully treated with interferon, he noted that the risk of HCC gets lower over time, while the opposite happens for untreated people.

Ioannou G et al. Eradication of HCV induced by direct-acting antivirals is associated with a 71% reduction in HCC risk. The Liver Meeting, abstract 142, 2017.