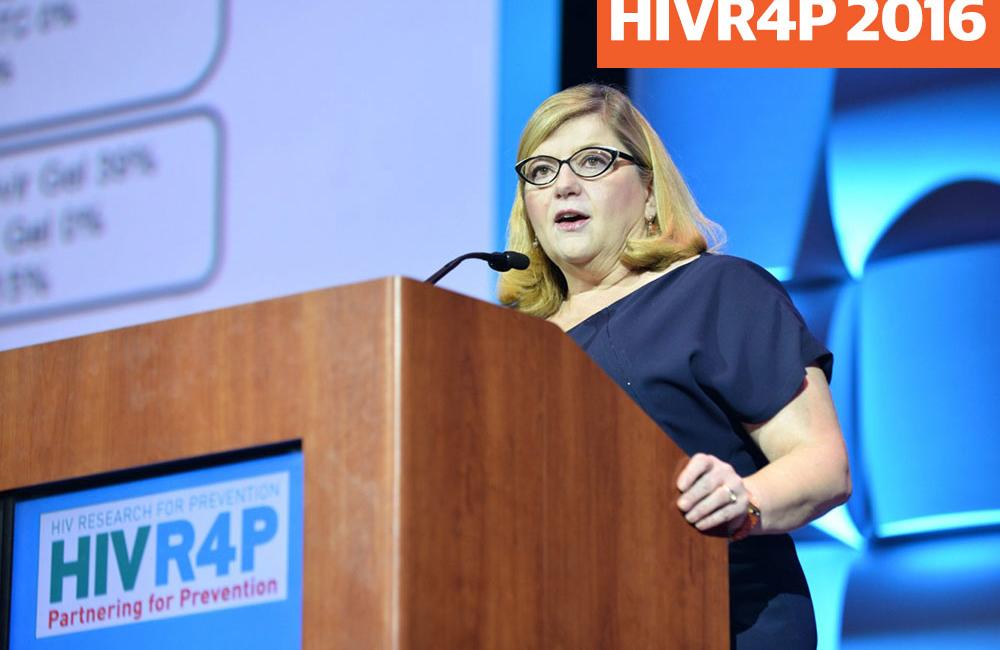 “We need to think outside of the box,” Sharon Hillier of the Microbicide Trials Network told the HIV Research for Prevention (HIVR4P 2016) conference in Chicago on Wednesday. Researchers should not be aiming to develop the most scientifically elegant solution for HIV prevention, but should “figure out how to make products that can really fit into people’s lives”.

“We have to remember that making products that work is only half of the battle,” she said. “We also have to develop products that are less stigmatising, that are fun to use, and that don’t undermine the sexual experience.”

The conference heard several more details of the Microbicide Trials Network’s ASPIRE study of the dapivirine vaginal ring. Women and their sexual partners rarely felt the ring during sex, but concern that this could occur meant that most women disclosed ring use to their partners. Experience of intimate partner violence was rare (3% of participants) but resulted in women not using the ring consistently.

Moreover, the dapivirine ring did not confer drug resistance in women who acquired HIV during the trial. There were no differences in the frequency and patterns of drug resistance between the active and placebo arms of the study.

Vaginal rings, modelled on products already used to deliver hormone replacement therapy and to provide contraception, have several potential advantages, she said. They are longer acting, only needing to be replaced once a month or potentially less often. It’s hoped that this will make adherence easier than for products which need to be taken every day or used at the time of sex.

Hillier said that women find them easy to use, “once they get the hang of it”. The flexible ring can be inserted and removed by the woman herself. Many users would like a product which they can start and stop as they wish. (A disadvantage of a long-acting injectable PrEP would be the impossibility of taking the drug out of the body.)

Vaginal rings are very safe. As they provide a “miniscule” quantity of antiretroviral drug to a localised part of the body, rather than throughout the bloodstream, there is less potential for side-effects than with some other products. This might mean that the product could be delivered in a less medicalised way, including in settings with weak health systems.

Being placed in the vagina, rings are private to all but the person using the ring and (potentially) her sexual partners. They don’t require applicators or other paraphernalia that could disclose use of the ring.

Disclosure to partners and sexual experience

Key findings from the ASPIRE study of a vaginal ring releasing the antiretroviral drug dapivirine were announced at conferences in February and July. Women in four African countries who were able to use the ring consistently had at least 65% fewer HIV infections, but many younger women had lower levels of adherence and were not protected. In qualitative interviews, many women said that they found the ring to be simple and discreet to use.

Several further analyses from the study were presented at the HIV Research for Prevention conference this week. One showed that many of women’s initial concerns about using a ring lessened over time.

During interviews at the beginning of the study, 29% of women said that they were worried about having a vaginal ring inside them for over a year, but at the end of the study only 4% expressed such concerns.

Specific worries included the ring not staying in place, falling out during sex, being uncomfortable or felt by a partner during sex, getting stuck inside, causing infertility or other health problems, and being difficult to insert or remove.

The attitudes of sexual partners towards the ring and the effect of a vaginal product on sexual experience are key to its acceptability. At the beginning of the study, 64% of women told their primary partner that they were using the vaginal ring, rising to 77% at the end. While not disclosing use of the ring might be expected to be associated with poor adherence, this was not the case. This does suggest that it is possible to use the ring without a sexual partner being aware of it.

Indeed, in-depth interviews showed that few women and partners noticed the ring during sex, as a Zimbabwean woman explained:

“My husband never complained that he is feeling it or that you are wearing something. Even myself, when we were having sex I did not feel anything or that he is hitting something that has been disturbed.”

Nonetheless many women had concerns about partners discovering the ring inadvertently. A woman in Uganda said:

“It’s better you tell him because you never know he might eventually find out, when he feels it during sex and question you about what you have put there… I think it would be better if you told him earlier so that even if he reached it during sex, you wouldn’t be afraid.”

To prevent partners noticing the ring, some women avoided specific sexual practices, such as letting a partner insert his fingers in the vagina, or sex while standing up.

When a partner found out about study participation or use of the ring, suspicious or angry responses sometimes followed. The researchers note that the study was conducted in communities where violence against women is a significant problem.

Among 2629 study participants, 85 women reported intimate partner violence (IPV) or other difficulties with a partner linked to the study. Younger women and those with a new partner were more likely to suffer IPV.

In only 26 cases did this result in physical harm to the participant and in most cases the woman said that the incident only had a minimal impact on her quality of life. But the researchers commented that this could be due to women in these environments treating partner violence as a fact of life.

Intimate partner violence (IPV) strongly influenced adherence and use of the vaginal ring:

Study staff endeavoured to provide support and link to services when IPV was reported. This appeared to help adherence – two to three months after IPV had been reported, the proportion of women with poor adherence dropped to 19%. “Disclosing exposure to intimate partner violence was a major step forward for many of these women,” commented researcher Thesla Palanee-Phillips.

In the eastern and southern African countries where the ring was studied, young women have the greatest vulnerability to HIV. However the youngest women in the study (those aged 18 to 21) were the most likely to have worries about using the ring, to experience intimate partner violence and to have poor adherence.

The final analysis from ASPIRE examined the potential for drug resistance in those women who acquired HIV. Probably due to inconsistent adherence, the ring was only partially effective and so a number of women acquired HIV and may have continued to use the ring during the early phase of HIV infection.

As with any antiretroviral-based prevention method, there is a concern that drug resistance could develop. The vaginal ring contains dapivirine, a non-nucleoside reverse transcriptase inhibitor (NNRTI) that is not used for treatment.

The results were reassuring: no resistance mutations specific to dapivirine were detected. Equal numbers of NNRTI mutations were detected in women given the active ring and women given a placebo ring. This suggests that the women were infected with a virus that was already resistant to NNRTIs. The resistance did not develop as a result of ongoing use of the ring.

The ASPIRE findings suggest that the dapivirine vaginal ring is biologically efficacious – it works as long as you use it – and that many women are able to incorporate it into their lives.

Hopefully, adherence will be better in the upcoming open-label studies of the ring, when participants will know that they have access to a product that is safe and effective. Moreover, demonstration projects may help clarify how health services should provide the ring and for which groups of women it is most suitable.

But the ring is clearly not a magic bullet that will be an appropriate prevention solution for all women. A wider range of HIV prevention technologies is needed, Sharon Hillier said, so as to give women and men a range of options. She outlined the microbicide products that are in development:

“You’ll notice I’m not talking about a future with gels,” Hillier said. She thought that the work on vaginal gels had shown that adherence is low, they are too messy and wet for many users, and that the applicators they require are expensive. More work is needed on rectal gels.

Hillier said that potential users are telling her that these innovations are needed. She described a 17 year-old Kenyan woman who challenged her at a recent consultation meeting. According to Hillier, the woman said:

“You scientists, you need to go back to your books, you need to work harder! We don’t want just a thing for prevention of HIV, we want something that can provide birth control and protect us from STIs. Why should I have to have a ring in my vagina, a rod in my arm and still get a condom in order to protect myself? You scientists, get busy!”