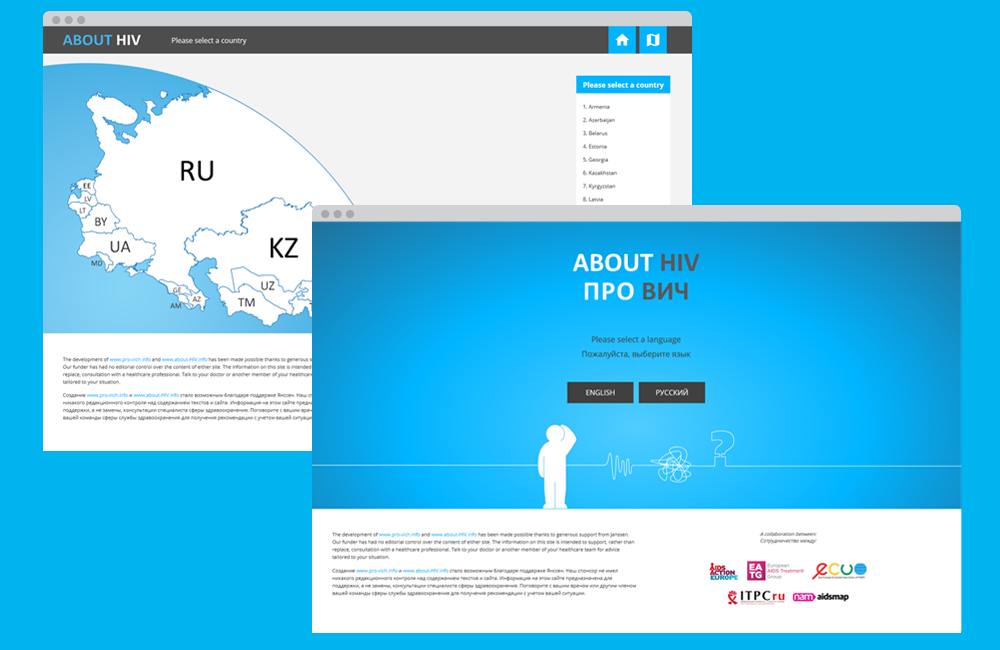 On 23 October, at the HIV Drug Therapy conference in Glasgow, NAM and its partners launched the ‘About HIV / Pro VICH’ website, for people living with HIV in Eastern Europe and Central Asia (EECA). The new website features a series of factsheets about key HIV topics, currently available in Armenian, English, Georgian, Kazakh, Russian and Ukrainian.

What is About HIV?

The new website, which can be accessed at www.pro-vich.info or www.about-HIV.info, is designed for EECA healthcare professionals, patient groups, people living with HIV and at-risk groups. It provides translated information resources on HIV and HIV transmission, the importance of treatment adherence and support for people with HIV to live healthily. The site also provides details of local support organisations.

Short for people living with HIV.

This project is a collaboration between six HIV agencies:

The website is a part of a broader project to address the lack of HIV information for a range of audiences in Eastern Europe and Central Asia, including people who inject drugs, men who have sex with men, sex workers and young people.

Why is the new site needed?

The Eastern Europe and Central Asia (EECA) region is the only part of the world that has seen a continuous increase in AIDS cases, and it remains the only region in Europe with an exponential annual increase in the number of new HIV infections.

A lot of this increase can be attributed to an unmet HIV information and communications gap that exists in the region. Key challenges included poor communication and information available in country-specific languages, as well as cultural and social landscapes deprioritizing health, challenges in healthcare infrastructures and political and economic agendas lacking an HIV/AIDS focus.

In the coming months further work will take place to expand the range of languages available on the site to cover all the countries within the designated region.

The development of www.pro-vich.info and www.about-HIV.info has been made possible thanks to generous support from Janssen.