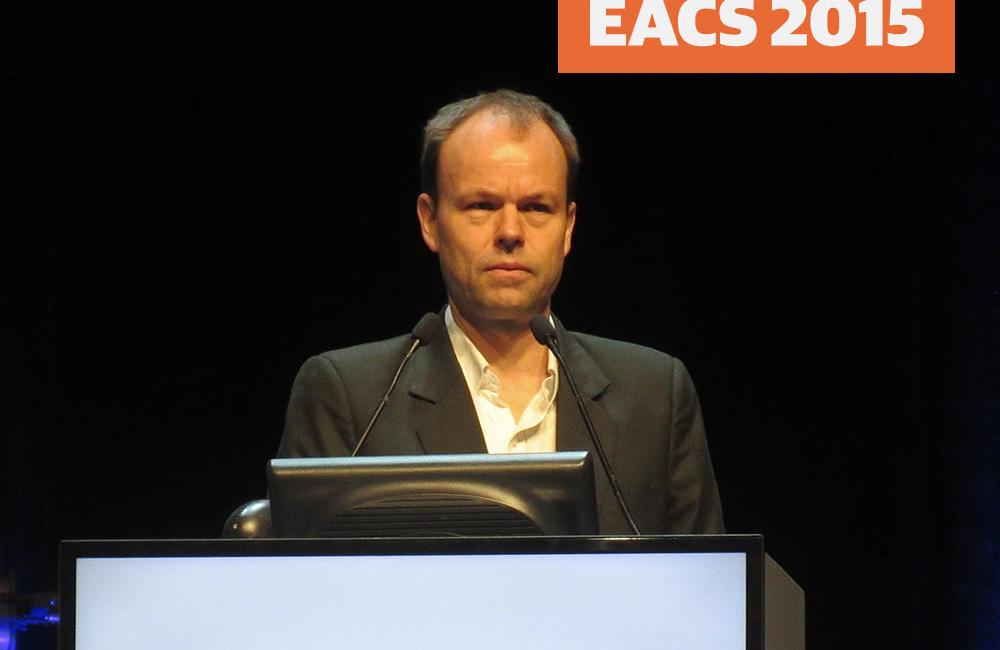 Lars Peters, presenting at EACS 2015. Photo by Liz Highleyman, hivandhepatitis.com
This article is more than 7 years old. Click here for more recent articles on this topic

Hepatitis C treatment that leads to sustained virological response (SVR) – generally regarded as a cure – was associated with a reduced risk of liver-related death and improved overall survival in an analysis of 3500 people with HIV and hepatitis C virus (HCV) co-infection, according to a presentation at the 15th European AIDS Conference last week in Barcelona, Spain. A related study found that while some liver-related events are declining over time, liver cancer remains a risk for people with co-infection.

Over years or decades, chronic HCV infection can lead to serious liver disease including cirrhosis, hepatocellular carcinoma (HCC, a type of liver cancer) and end-stage liver failure necessitating a liver transplant. Research has shown that people living with HIV who have HCV co-infection experience more rapid liver disease progression, on average, than those with hepatitis C alone.

Lars Peters of Rigshospitalet in Copenhagen, Denmark, and fellow investigators with the COHERE Hepatitis Subgroup looked at the long-term risk of all-cause, liver-related and non-liver-related death among people with HIV and HCV co-infection, and its relation to hepatitis C treatment response, in a large multi-cohort study.

Prior research has shown that sustained response to hepatitis C treatment is associated with reduced mortality among HIV-negative people with HCV, Peters noted as background. The survival benefit of treatment for people with co-infection could be greater due to their accelerated fibrosis progression, or less because they are more likely to die of other ‘competing’ causes.

COHERE (Collaboration of Observational HIV Epidemiological Research in Europe), part of the EuroCoord network of HIV cohort studies, is comprised of 33 prospective cohorts from across Europe; this analysis included data from 18 of these cohorts.

The analysis included all COHERE participants with HIV and HCV co-infection who had ever started interferon-based hepatitis C therapy and were followed for at least 96 weeks. (Interferon-free therapy using direct-acting antiviral agents is too recent to have played a role in this study.)

Overall, nearly 80% were men, the median age at hepatitis C treatment initiation was 42 years and 60% had a history of injecting drugs. Most were on antiretroviral therapy (ART) and the median CD4 cell count was 426 cells/mm3. Just 4% were triply infected with hepatitis B virus (HBV). Over half (56%) had HCV genotype 1.

Participants were classified into three groups:

Among the 3500 people with co-infection who started hepatitis C treatment, 28.5% were responders, 45.3% were non-responders and 26.2% had unknown response.

Responders were also less likely than non-responders to have HCV genotype 1 (50% vs 62%), which does not respond as well to interferon. Median APRI scores – a biomarker index used to estimate liver fibrosis – were 0.8 for non-responders and 0.9 for responders at the start of treatment, suggesting moderate to advanced fibrosis; a score over 1.5 suggests cirrhosis.

The researchers assessed survival times starting from week 96 after treatment initiation until death or last follow-up visit. A total of 213 participants (6.1%) died during a median 3.8 years of follow-up.

The rate of death due to all causes was about half as high for treatment responders as for non-responders: 6.79 vs 12.31 deaths per 1000 person-years (7.8 for unknown response). Non-responders had a significantly higher risk of all-cause mortality after adjusting for demographics, HIV-related and HCV-related factors.

Among the four treatment responders who nonetheless died of liver-related causes, one had evidence of HCV reinfection, suggesting active infection despite having been cured once. None of the responders died from hepatocellular carcinoma.

A limitation of this study is the lack of follow-up HCV RNA measurements for all participants, but Peters said this would tend to underestimate rather than exaggerate the survival benefit of successful treatment.

Trends in HCC and liver-related events

Lars Iversen Gjaerde of the University of Copenhagen and colleagues looked at shifts in HCC and other liver-related events among participants with HIV and HCV co-infection in four prospective cohort studies.

As background, Gjaerde said prior research shows that while liver-related mortality among people with co-infection seems to have declined during the past decade, hepatocellular carcinoma may have increased.

This analysis included 7229 people with HIV and HCV co-infection followed from 2001 through 2014 in the EuroSIDA Study, the Swiss HIV Cohort Study, the Canadian Co-infection Cohort and the South Alberta Clinic Cohort. A majority (68%) were men, most were white and the median age was 38 years. About 60% had a history of injecting drugs and 5% also tested positive for HBV. Hepatitis C status was determined by HCV antibodies, not HCV RNA, so it is possible some participants with presumed co-infection had actually cleared HCV.

A total of 72 cases of HCC and 375 other liver events occurred during approximately 45,000 person-years of follow-up, giving crude incidence rates of 1.6 and 8.6 cases per 1000 person-years, respectively.

Cirrhosis was the strongest predictor of HCC, Gjaerde said, conferring a 13-fold higher risk. Older age and hepatitis B were also significant risk factors, while a higher CD4 count was protective. Peters suggested that the increase in HCC could be explained by more people with cirrhosis in the population over time. Cirrhosis, older age and low CD4 count – but not hepatitis B – were also significant risk factors for other liver events.

In conclusion, this study showed an “opposing trend in crude incidence rates,” which are increasing for HCC and decreasing for other liver events.

Though assigned to debate whether HCV clearance “solves everything,” Juan Berenguer of Hospital Gregorio Marañón in Madrid and Stefan Mauss of the Center for HIV and Hepatogastroenterology in Düsseldorf started out in agreement, and instead focused on liver-related outcomes and extra-hepatic (outside the liver) manifestations of HCV infection.

Studies are in accord that successful treatment reduces liver-related complications including advanced fibrosis, cirrhosis and elevated portal pressure – the best predictor of liver decompensation – Berenguer summarised. Nevertheless, people who achieve SVR still have a small remaining risk of decompensation and HCC, so they should continue to undergo regular liver cancer screening.

Mauss explained that there is less evidence for the effects of successful treatment on extra-hepatic manifestations, which may include cryoglobinaemia, type 2 diabetes and increased cardiovascular risk. Hepatitis C treatment improves survival for people with advanced liver disease, but this is mainly due to a decrease in liver-related deaths. Treatment appears to also reduce non-liver-related events and death in people with less advanced fibrosis.

Taken together, this research shows that treating hepatitis C can have numerous benefits including reduction of liver cancer and liver-related deaths. If interferon-based therapy demonstrated these improved outcomes – despite its poor tolerability and suboptimal efficacy – the highly effective new interferon-free DAA treatments are likely to be even more advantageous.

The U.S. Public Health Service Commissioned Corps announced Thursday, that it is changing its policies to allow future applicants living with HIV and chronic hepatitis B to join.
Advocate
2 Dec 22
Liver disease

More than a third of people living with HIV had fatty liver disease in a German cohort study, and a substantial number had moderate or worse fibrosis, researchers reported in the journal AIDS.
POZ
23 Nov 22
PrEP