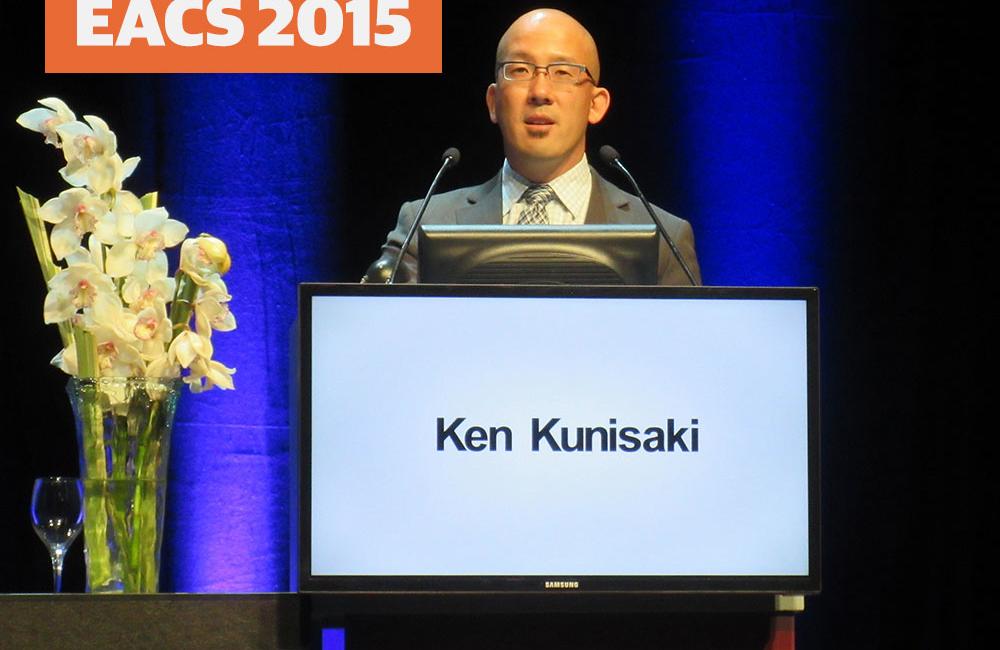 Ken Kunisaki, presenting at EACS 2015. Photo by Liz Highleyman, hivandhepatitis.com
This article is more than 7 years old. Click here for more recent articles on this topic

Participants who started antiretroviral therapy (ART) soon after HIV diagnosis in the large START trial showed no differences in lung function or neuropsychological performance when compared to people randomised to deferred ART, according to two studies presented last week at the 15th European AIDS Conference in Barcelona, Spain.

A related study found that earlier initiation of treatment in the START trial was associated with greater bone loss over time.

Starting antiretroviral treatment before the development of serious immune system damage greatly reduces the risk of HIV disease progression and death, but early treatment can potentially also have drawbacks including longer exposure to toxic drugs. The INSIGHT START (Strategic Timing of Antiretroviral Treatment) trial was designed to address the long-standing controversy over the optimal timing of HIV treatment, especially for people who still have high CD4 counts.

The primary START results, presented this summer at the International AIDS Society Conference in Vancouver and published in the August 27 New England Journal of Medicine, showed that participants randomised to start ART soon after HIV diagnosis had a significantly lower risk of illness and death than those who waited. The immediate treatment group not only had a 72% lower risk of AIDS-related infections and malignancies compared to the deferred group, but also were 39% less likely to experience serious non-AIDS events (heart, liver and kidney events and non-AIDS cancers) or death.

The START design included several sub-studies looking at the effects of early versus deferred therapy on specific outcomes known or suspected to be associated with HIV infection or its treatment, including bone density, lung function and neurocognitive function.

Ken Kunisaki of the University of Minnesota presented results from the START pulmonary sub-study, which compared changes in lung function in the immediate and deferred ART groups.

Chronic obstructive pulmonary disease (COPD) is an emerging HIV comorbidity, Kunisaki noted as background. Observational studies have shown that people with HIV are at higher risk for COPD, but there are conflicting data about whether ART is associated with elevated risk. The underlying mechanisms are unclear, but could be related to inflammation, increased risk of pneumonia and other lung infections, changes in lung microbiota and perhaps antiretrovirals themselves, he said.

In this sub-study, participants had spirometry tests done at baseline and annually thereafter. Spirometry is used to assess lung function by measuring the amount of air inhaled and exhaled. The primary measure in this analysis was the change in forced expiratory volume, or the amount of air a person can blow out in 1 second (FEV1). FEV1 typically peaks around age 25 and then declines over time; a level below 30% of the maximum is disabling. Results were stratified by smoking status.

This sub-study included 518 people randomised to the early ART group and 508 in the deferred ART group. The distribution of participants in the sub-study differed from the study as a whole, with about 30% each in Africa and Europe, 19% in South America, and about 10% each in Asia and the US. About 70% were men and the median age was 36 years. About 60% had never smoked, 28% were current smokers and 11% were former smokers.

Over a median follow-up time of 2.0 years, FEV1 slope showed "absolutely no difference" between the immediate and deferred ART arms for either smokers or non-smokers, Kunisaki reported.

Among smokers, FEV1 fell by -34 ml/year in the immediate ART group and by -31 ml/year in the deferred group, a difference that was not statistically significant (p = 0.83). There was also no significant difference between treatment arms among non-smokers, -29 vs -22 ml/year, respectively (p = 0.56) – though the smokers did see larger declines than non-smokers in both study arms.

Turning to self-reported lung function using the standardised St George’s Respiratory Questionnaire for COPD (SGRQ-C), scores fell by -1.1 in the immediate ART arm and by -0.5 in the deferred arm among smokers, and fell by -1.1 while rising by +0.4 among non-smokers; neither difference was significant. Looking at specific domains for symptoms, activity and impact, the only significant difference was worsening symptoms reported by smokers in the immediate ART group (-2.9 vs +1.6). Though changes were small and mostly not significant, it is notable that among non-smokers scores for all three domains and the overall SGRQ-C fell in the immediate ART arm – indicating improvement – while rising in the deferred arm.

"Immediate vs deferred ART has no impact on lung function decline" in people living with HIV who have CD4 counts above 500 cells/mm3, the researchers concluded. "Immediate ART can be offered without concern for increasing COPD risk in these patients."

Finally, Richard Price of the University of California at San Francisco presented findings on behalf of the START neurology sub-study, which looked at changes in performance among 592 participants randomised to early or deferred ART.

Participants in this sub-study came from South America (42%), Europe (25%), Thailand (15%), the US (14%) and Australia (4%). Two-thirds were men and the median age was 34 years. About 8% had a prior psychiatric diagnosis and 5% reported alcoholism or drug dependence. They were described as a 'high functioning' group, with 76% being employed and 80% having had either vocational training or college/university education; this is relevant because past research has shown a link between neurocognitive performance and education level.

Over two years of follow-up, QNPZ-8 scores rose in parallel from baseline, increasing by similar amounts in the immediate and deferred ART groups. Price noted that this likely reflects a 'practice effect' seen when people repeatedly take the tests. The estimated difference between the two groups was -0.01, which was not statistically significant. By month 60, scores in the immediate arm rose more steeply while those in the deferred group declined, but there were only a small number of participants still being followed at that point and Price said this divergence "shouldn’t be paid attention to."

In response to a question, Price said that use of efavirenz (Sustiva) – an antiretroviral known to cause central nervous system side-effects – was very common among participants. No obvious effects of efavirenz were noted, but this is being analysed further.

Taken together, these studies offer reassurance that early ART does not lead to serious or clinically significant adverse outcomes, though the greater bone loss observed in the immediate arm is cause for concern (see here for full report). On the other hand, the sub-studies also did not reveal major advantages for immediate ART with regard to bone, lung or neurological outcomes.

A limitation of all these sub-studies is that START enrolled a relatively young population with recent HIV diagnosis and good immune function. Observational studies that have seen higher rates of cardiovascular, neurological and other conditions among people with HIV have generally looked at older groups of patients, and problems may increase in this group as they age.

Also, as noted, the randomised portion of START was stopped early, so the average three years of follow-up was shorter than expected. Researchers are continuing to follow participants to look at longer-term outcomes, and cardiovascular and liver sub-studies are also underway. But now that both arms have been advised to start treatment, the differences between them are likely to diminish over time.