Benefits of early HIV treatment are clear, but issues raised by START and D:A:D remain unresolved 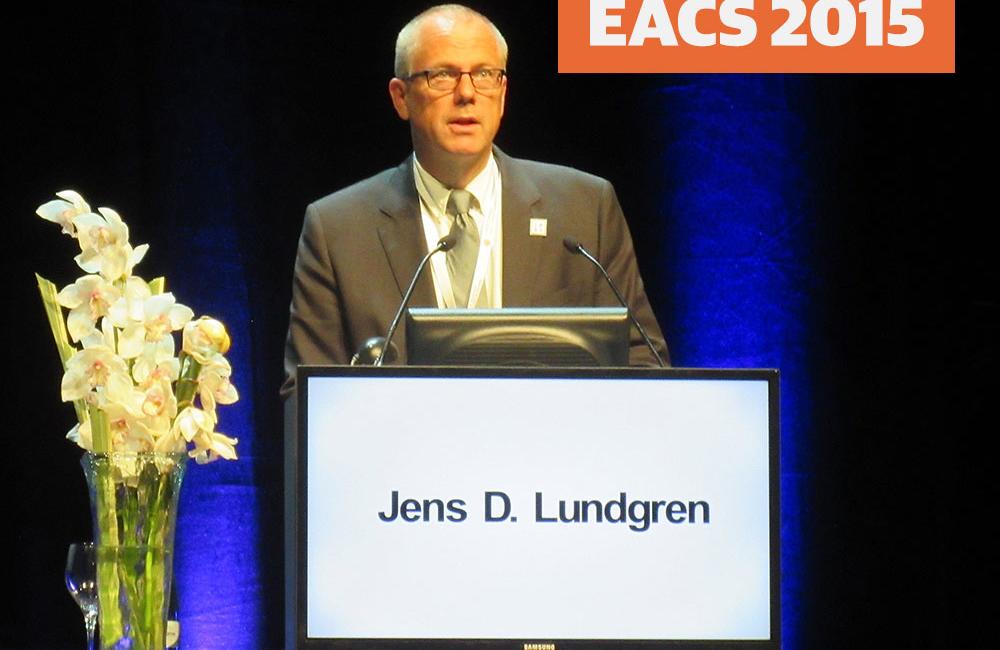 The long-running controversy over when to start antiretroviral therapy (ART) has been definitively answered, but research is still needed to fully understand the implications of the large START and D:A:D studies, Professor Jens Lundgren of the University of Copenhagen said yesterday at a joint plenary session of the 15th European AIDS Conference and the 17th International Workshop on Co-morbidities and Adverse Drug Reactions in HIV. Unresolved issues include the long-term effects of decades of antiretroviral drug exposure and the mechanisms underlying co-morbidities such as cardiovascular disease and cancer in people living with HIV.

Prof. Lundgren was a principle investigator for the START (Strategic Timing of Antiretroviral Treatment) and D:A:D (Data Collection on Adverse Events of Anti-HIV Drugs) studies, which have provided some of the key evidence informing the evolution of clinical practice. At the conference opening ceremony he was given the European AIDS Clinical Society (EACS) Award for Excellence in HIV Medicine in recognition of his contributions.

Benefits and drawbacks of ART

Who should start antiretroviral treatment and when has been a long-standing subject of contention in the HIV field.

The 1996 International AIDS Conference in Vancouver ushered in the era of effective combination treatment, with researchers showing that highly active ART prevents disease progression and improves survival. This led to a shift toward earlier treatment at higher CD4 counts, especially in the US; Europe was more cautious, while low- and middle-income countries lacked the resources to make that choice.

But, before long, evidence began to emerge that ART had drawbacks as well as benefits. In the early 2000s, D:A:D was among the first large studies to show evidence of metabolic abnormalities and increased cardiovascular disease among people on ART. D:A:D was also the first to make the link between abacavir and elevated heart attack risk. This helped shift the standard of care back toward delaying or interrupting treatment in an effort to minimise side-effects and long-term toxicities.

In 2006 another large trial, SMART (Strategies for Management of Antiretroviral Therapy), showed that treatment interruption is a hazardous strategy, as people who did so had a higher risk of disease progression and death compared to those on continuous therapy. People randomised to stay on treatment not only had less AIDS-related illness, but also fewer serious non-AIDS-related heart, liver and kidney problems than those who discontinued ART based on CD4 count.

This year, the HIV field hit another milestone when the START trial found that people who initiated ART immediately after they are diagnosed with HIV have a lower risk of illness and death than those who waited until their CD4 count fell to 350 cells/mm3.

Primary results from START, which Lundgren presented at the International AIDS Society Conference this summer in Vancouver, showed that participants randomly assigned to receive early ART not only had a 72% lower risk of AIDS-related infections and malignancies, but also were 39% less likely to experience serious non-AIDS events and death.

These findings – along with improvements that have made antiretroviral drugs more effective, safer and easier to take – are shifting practice back towards early treatment. The World Health Organization's latest HIV treatment guidelines, new EACS guidelines to be presented at this conference and a growing number of national guidelines now recommend that everyone diagnosed with HIV should start treatment regardless of CD4 count.

Experts still do not fully understand the reasons behind the higher rate of heart disease seen in D:A:D, the elevated cancer rates seen in several studies or the higher risk of non-AIDS illness and death among untreated people with high CD4 counts in START. Persistent immune activation and inflammation, unrecognised antiretroviral drug toxicities and traditional risk factors may all play a role.

Researchers will continue to follow START participants for at least the next two years – and hopefully for the next five to ten years – to better understand long-term outcomes. Non-AIDS events may have been uncommon in START because the population is relatively young (in their mid-thirties) and participants have a low underlying risk compared to the older participants (in their late forties) in SMART. Several START sub-studies are looking at specific complications, including pulmonary, bone and neurological sub-studies presented at this conference.

Lundgren said that the START findings show that we can't rely solely on the CD4 count to reflect immune system damage that occurs early in HIV infection and appears to not be fully reversible even with suppressive ART.

The good news is that D:A:D and other studies have seen a decline in deaths among people with HIV due to cardiovascular and liver disease over the years, despite an ageing population. The prognosis of people living with HIV after a heart attack has also improved.

Lundgren said this trend is a tribute to people with HIV who have made lifestyle changes such as stopping smoking, clinicians who have learned to better manage chronic conditions in the people in their care (for example controlling hypertension and elevated blood lipids) and the pharmaceutical industry's innovation to improve drug safety while optimising potency. This has enabled the field to shift from relying primarily on protease inhibitors to mainly starting treatment with NNRTIs (non-nucleoside reverse transcriptase inhibitors) and now integrase inhibitors.

On the other hand, there has been a striking increase in kidney disease, perhaps associated with the widespread use of tenofovir, Lundgren said. Moreover, non-AIDS cancers are emerging as a dominant cause of death among people with HIV – the reduction in non-AIDS events in the early ART arm of START was largely driven by cancer. “This points to the fact that there's something we haven't understood about immune deficiency that lets cancers develop which ART can repair partially but not fully,” he said.

Some cancers that occur more often in people living with HIV are known to be caused by infectious agents such as human papillomavirus (HPV), but he cautioned that for other types of cancer, just because we are not aware of it does not necessarily mean infection is not involved.

Along with these unanswered scientific questions, there are also policy issues that must be addressed to ensure that antiretroviral treatment is made available to everyone, worldwide, living with HIV. Cascades of care from different countries show a wide variation in the number of people with HIV who are diagnosed, linked to care, prescribed ART and achieve viral suppression.

Lundgren cited Russia as a country that is not doing enough to get people with HIV on treatment. Tuberculosis played major role in the higher level of illness and death in the delayed treatment arm of of START, as untreated HIV increases the risk of latent infection becoming active disease. “An environment where hardly anyone is being treated for HIV is really creating the perfect storm for further evolution of multidrug-resistant TB,” he warned.

Summing up, Lundgren stressed that although the controversy about when to start ART has been resolved, “drug safety is not a closed chapter in HIV medicine.” While antiretroviral toxicity had been decreasing in recent years, we have no experience with decades of use. For example, protease inhibitors inhibit the cytochrome P450 system, which “probably has some meaningful purpose to preserve health,” he said. “We have no data on what happens if you inhibit those enzymes for 30 years.” Given the clear benefits of ART, randomised clinical trials will not be possible and observational studies will remain important.

Despite the conclusive evidence supporting the benefits of early treatment, most people living with HIV in Europe remain off ART, Lundgren concluded, and scientific and political leadership is needed to correct this situation.

Also presented at the conference:

Although long-acting CAB/RPV is FDA-approved only for people with HIV and viral suppression, this remarkable case series shows it can work also in those with viremia -- where it could be a life-saving intervention.
NEJM Journal Watch
10 Aug 22
Treatment outcomes & life expectancy

For people diagnosed late with HIV, use of integrase inhibitors and immune recovery during the first two years after diagnosis were key predictors of long-term survival, according to a new study unveiled at AIDS 2022 last week.
POZ
9 Aug 22
Child developmental issues

Five-year cumulative data from two trials of bictegravir-emtricitabine-tenofovir alafenamide (BIC/FTC/TAF; Biktarvy, Gilead) demonstrated high rates of viral suppression that were durable without the emergence of resistance, according to a presentation at AIDS 2022.
Infectious Disease Special Edition
5 Aug 22
Adherence

People living with HIV who report frequent loneliness are more likely to miss doses of their antiretroviral therapy, thus jeopardizing their health, according to a new study presented at the 24th International AIDS Conference (AIDS 2022) in Montreal.
POZ
5 Aug 22
More editors' picks