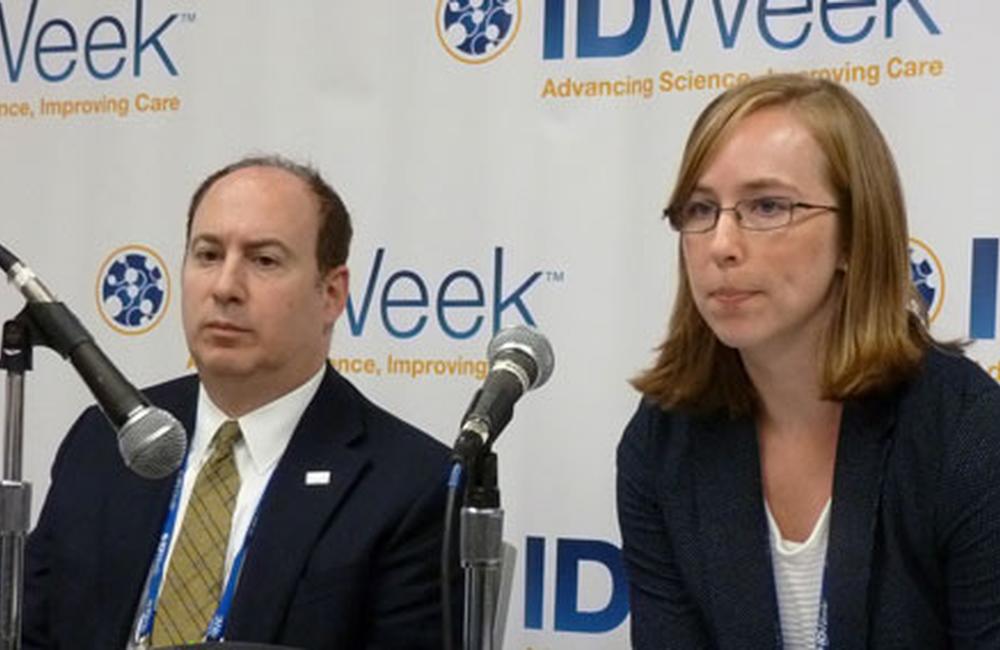 Elizabeth Neuner from the Cleveland Clinic and HIV Medicine Association chair Michael Horberg, at the ID Week Conference.
This article is more than 8 years old. Click here for more recent articles on this topic

HIV-positive people treated at community clinics were more likely to continue receiving care, while those treated at hospital clinics were more likely to maintain undetectable viral load, researchers reported at IDWeek 2013 this week in San Francisco. Other studies found that people with HIV often take multiple drugs for various conditions and a multidisciplinary team of experts can help prevent medication errors.

Asher Schranz from New York University and colleagues compared outcomes among people with HIV receiving care in different settings. Community clinics may have advantages such as culturally competent care targeted to specific populations, whilst hospitals may offer more specialty care and better management of co-morbid conditions.

This retrospective cohort study included a total of 13,027 HIV-positive people receiving care at 25 Ryan White-funded clinics in Philadelphia between January 2008 and December 2011. Twelve hospital-based clinics saw 61% of all patients and the thirteen community-based clinics saw 39%. People who received care at multiple clinics and those still in their first year of care were excluded from the analysis.

The 2008 sample included 6434 people and the 2011 sample included 10,037 people (some were in both groups). Nearly two-thirds were men, about one-third were age 50 or older and about 65% were black. Nearly half were in the heterosexual transmission risk group, about 30% were men who have sex with men and approximately 17% had a history of injecting drug use. Most were on low incomes. About one-third had a CD4 cell count below 350 cells/mm3, the threshold for starting antiretroviral therapy (ART) during most of the study.

The researchers compared characteristics of patients seen at community-based vs hospital-based clinics, assessed changes over time, and compared outcomes including retention in care (defined as two visits at least 90 days apart), ART use and viral load suppression.

"Community clinics have higher proportions of patients retained in care," the researchers concluded. "Patients in hospital clinics are more likely to be virally suppressed despite similar rates of ART use between clinic types."

They noted that this study focused on Ryan White-funded clinics in an urban setting, and the results might not be generalisable to other types of healthcare facilities.

Jennifer Edelman from Yale University and colleagues looked at 'polypharmacy', or use of multiple drugs for various conditions, amongst people with HIV, as well as the association between polypharmacy and risk of death.

This cross-sectional analysis (October 2009 to September 2010) included 16,989 HIV-positive people on ART and 47,613 matched HIV-negative control subjects in the US Veterans Aging Cohort Study, which maintains extensive electronic medical and pharmacy records. People with no visits in the past year, those with a cancer diagnosis at baseline, those with no dispensed medications, and HIV-positive people not on ART were excluded.

Almost all the participants were men, the average age was about 55 years, 47% were black and 40% were white. In the HIV-positive group, the median CD4 cell count was 322 cells/mm3, 56% were taking protease inhibitors and 44% were on drugs in the non-nucleoside reverse transcriptase inhibitor class (NNRTIs).

Amongst both HIV-positive and HIV-negative people, the most frequent co-morbid conditions were hypertension, diabetes, severe mental illness, substance-use disorders, cardiovascular disease and chronic obstructive pulmonary disease (COPD). All but substance use were more common in the HIV-negative group.

Being HIV positive, male and black or Hispanic were associated with fewer drugs, whilst having diabetes, COPD, cardiovascular disease or hypertension was associated with more drugs. However, people with kidney disease or liver cirrhosis were on fewer drugs, perhaps because these conditions affect drug processing and can lead to worsened side-effects or interactions.

Use of multiple medications was associated with a higher risk of death for both HIV-positive and HIV-negative people. People taking more than five non-ART drugs had a 30% higher all-cause mortality rate and, for each medication beyond five, mortality rose by 5% in an adjusted analyses. This increase in mortality was greater for people with HIV.

"Treated HIV-infected patients are commonly exposed to polypharmacy", but "are less likely to be prescribed non-ART medications" than HIV-negative people, the researchers concluded.

"Future studies examining longitudinal associations with polypharmacy and mortality and other health outcomes are warranted," they recommended. "The development and evaluation of interventions to reduce polypharmacy among HIV-infected patients are needed."

This retrospective analysis compared 162 patients admitted before (January to October 2011) and 110 admitted after (July to December 2012) implementation of these interventions. Admissions could be for HIV-related care or any other condition.

The most common types of errors before the interventions involved prescribing combinations that resulted in drug interactions, incorrect frequency of administration, prescribing incomplete regimens, failing to adjust dosing for conditions such as kidney impairment, and over-dosing or under-dosing.

The researchers found that the rate of medication errors fell significantly, from 50% of all admissions in 2011 to 34% in 2012. The mean number of errors also dropped, from 1.5 to 1.2 per person. In addition, the likelihood of resolving errors rose from 36 to 74%, and the time it took to do so fell from a median of 180 to 23 hours. Patients who received an infectious disease consultation had a significantly higher likelihood of error resolution (68 vs 32%).

"Multifaceted, multidisciplinary stewardship was able to significantly reduce the rate of medical errors and increase the rate of resolution," Neuner summarised at an IDWeek press conference on Thursday.

HIV is now mainly an outpatient disease and many providers working in inpatient setting are not familiar with ART, the US HIV Medicine Association chair Michael Horberg noted. This study "adds to the increasing body of evidence supporting expert care in inpatient as well as outpatient settings".

In what Spotlight understands to be a world-first, South Africa is on the brink of allowing pharmacists with the required permits to prescribe HIV medicines without people first having to get a script from a doctor or nurse. Catherine Tomlinson investigates how it will work and why it may be just the boost the country’s HIV response needs.
Spotlight
28 Jul 21
Delivery of care

What Will Bring People Living With HIV Back Into Care?

Convenience, accessibility, confidentiality and quality care. If the U.S. health care system wants to bring people who have left HIV care back to the clinic, this is what people with HIV say they’ll have to do, according to data presented this week at the 11th International AIDS Society Conference on HIV Science (IAS 2021).
POZ
22 Jul 21
Delivery of care

How COVID-19 changed the approach to HIV

The emergence of new models of differentiated service delivery during the pandemic — including across the global south — is one of the central themes of the International AIDS Society Conference on HIV Science that began Sunday.
Devex
20 Jul 21
Treatment guidelines

This publication brings together important clinical and programmatic updates produced by WHO since 2016 and provides comprehensive, evidence-informed recommendations and good practice statements within a public health, rights-based and person-centred approach.
World Health Organization
17 Jul 21
Delivery of care

Can health plans force clients to get HIV meds in the mail or at a specific pharmacy in order to keep discounts?
POZ
8 Jul 21
More editors' picks