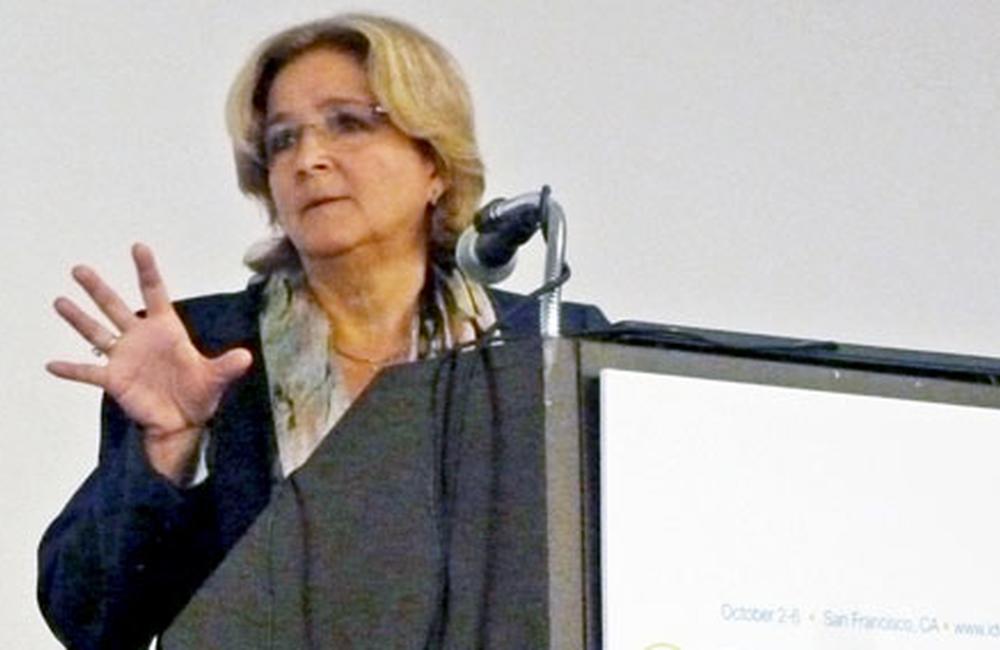 Andrea Kovacs, from the Keck School of Medicine in Los Angeles, speaking at the ID Week Conference.
This article is more than 8 years old. Click here for more recent articles on this topic

CD4 and CD8 cell activation were found to be associated with biomarkers of liver fibrosis among HIV/HCV co-infected women, suggesting that immune activation related to persistent HIV infection may play a role in liver disease progression, researchers reported yesterday at the IDWeek 2013 conference in San Francisco.

Over years or decades, chronic hepatitis C virus (HCV) infection can lead to serious liver disease including advanced fibrosis, cirrhosis or hepatocellular carcinoma. Liver disease is now a leading cause of death among people with HIV. Research has shown that HIV/HCV co-infected individuals experience more rapid liver disease progression and do not respond as well to interferon as people with HCV alone, but the reasons for this are not fully understood.

Andrea Kovacs from the Keck School of Medicine in Los Angeles presented findings from an analysis looking at associations between HIV and hepatitis C status, liver fibrosis biomarkers and immune activation.

Lower CD4 counts have been associated with worse liver fibrosis in co-infected people, and some studies have shown that markers of macrophage activation – including soluble CD14 (sCD14) and interleukin 6 (IL-6) – are related to liver disease, the researchers noted as background. However, the impact of HIV-associated T-cell activation on liver disease in co-infected people remains unclear.

This study looked at participants in the Women’s Interagency HIV Study (WIHS), a prospective multicentre cohort of women living with and at risk for HIV in the US. The full cohort includes nearly 3000 HIV-positive and nearly 1000 at-risk HIV-negative women in six cities.

This retrospective analysis included 351 HIV/HCV co-infected and 269 HIV mono-infected women followed from 1994 to 2002. People who also had hepatitis B were excluded.

Looking at HIV status, in both groups approximately 20% had CD4 counts under 200 cells/mm3, half had 200 to 500 cells/mm3 and nearly one-third had CD4 cell counts higher than 500 cells/mm3 at baseline. Given the time period, few women were on effective antiretroviral therapy (ART) at study entry. Over the course of the study, 40% of co-infected women and 75% of mono-infected women started potent combination regimens classified as 'HAART'.

The researchers measured T-cell activation markers and liver fibrosis markers at semi-annual study visits, with a median of two visits per woman. They looked at percentages of CD4 and CD8 cells expressing two cell-surface markers, CD38 and HLA-DR, which indicate cell activation. Absence of these markers indicates resting cells.

For both HIV/HCV co-infected and HIV mono-infected women, higher plasma HIV RNA and lower CD4 count were significantly associated with worse liver fibrosis according to APRI scores. Use of ART, however, did not have a significant effect.

Amongst co-infected women, having a higher percentage of activated CD4 cells – but not activated CD8 cells – was significantly associated with higher APRI scores after adjusting for demographic variables and HIV and HCV viral load. Conversely, having more resting CD4 and CD8 cells predicted less fibrosis. In contrast, amongst HIV mono-infected women, links between CD4 or CD8 activation and APRI scores did not reach statistical significance. Similar patterns were seen for FIB-4 scores.

A limitation of this study is that most participants were either not on ART or were taking less effective and more toxic older antiretroviral regimens, so further study is needed on the effect of long-term immune activation on liver disease and liver-related mortality in the modern ART era.

This analysis also did not look at hepatitis C treatment. Sustained virological response to interferon-based therapy has been shown to slow or halt fibrosis progression and reduce liver-related mortality, and the benefits are likely to be even greater with more effective direct-acting antiviral agents.

Operskalski E et al. (Kovacs A presenting) Association of T cell activation with a non-invasive marker of liver fibrosis in HIV-infected women with and without hepatitis C co-infection. IDWeek 2013, San Francisco, abstract 74, 2013. View the abstract on the IDWeek website.

Delaying the initiation of antiretroviral therapy in HIV-positive patients is associated with a small increase in risk for AIDS-related cancer, according to new research.
Medscape (requires free registration)
17 Mar 21
Treatment outcomes & life expectancy

WHO reveals leading causes of death and disability worldwide: 2000-2019

HIV/AIDS dropped from the 8th leading cause of death worldwide in 2000 to the 19th in 2019, reflecting the success of efforts to prevent infection, test for the virus and treat the disease over the last two decades. While it remains the fourth leading cause of death in Africa, the number of deaths has dropped by more than half, falling from over 1 million in 2000 to 435 000 in 2019 in Africa.
World Health Organization
10 Dec 20
Treatment outcomes & life expectancy

Hospitalization Rates Have Declined Among People With HIV

Researchers analyzed the rate of hospitalization among 28,000 people with HIV in the United States and Canada between 2005 and 2015.
POZ
10 Dec 20
HIV treatment

In this exclusive series of articles, David Alain Wohl, M.D., calls attention to 10 developments that have tremendous short-term implications for our day-to-day efforts to improve HIV prevention, treatment, patient care, and policy in the U.S., and analyzes each development with his trademark wit and clinical savvy.
TheBodyPro
1 Dec 20
More editors' picks