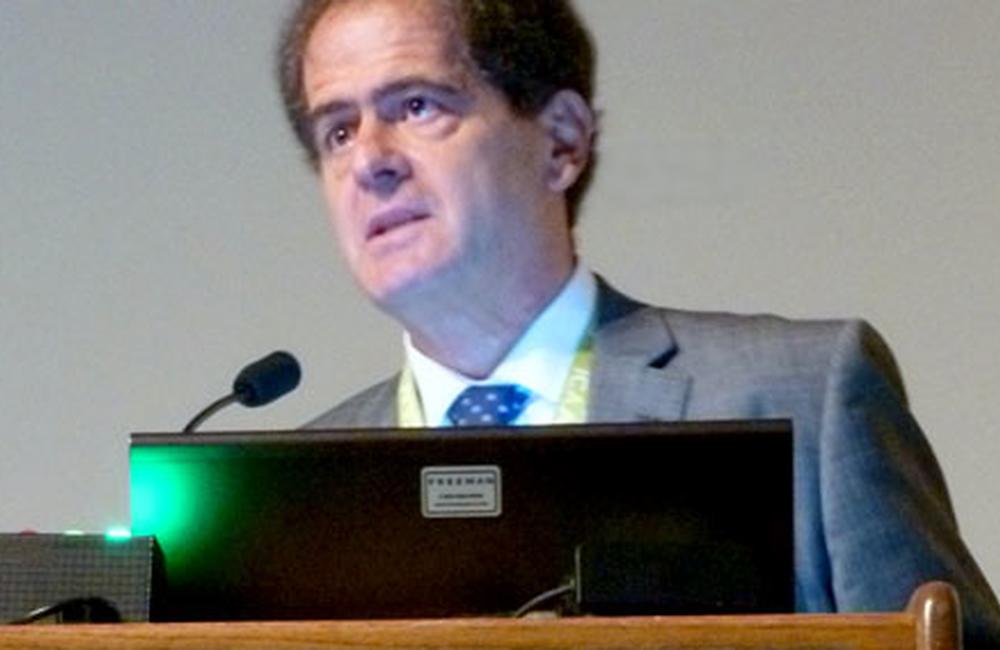 Juan Berenguer, from Hospital Gregorio Marañón, speaking at ICAAC 2013.
This article is more than 9 years old. Click here for more recent articles on this topic

Hepatocellular carcinoma is frequently diagnosed at an advanced stage in HIV-positive people with hepatitis B or C co-infection, contributing to a high mortality rate that has changed little in recent years, according to a report at the recent 53rd Interscience Conference on Antimicrobial Agents and Chemotherapy (ICAAC) in Denver.

Over years or decades, chronic hepatitis B virus (HBV) or hepatitis C virus (HCV) infection can lead to severe liver disease including cirrhosis and hepatocellular carcinoma (HCC), a type of primary liver cancer.

People co-infected with HIV and viral hepatitis tend to experience more rapid liver disease progression and respond less well to treatment than those with HBV or HCV alone. As antiretroviral therapy has reduced mortality due to AIDS, liver disease including HCC has become a growing cause of death among people with HIV.

Palliative care improves quality of life by taking a holistic approach, addressing pain, physical symptoms, psychological, social and spiritual needs. It can be provided at any stage, not only at the end of life.

Juan Berenguer from Hospital General Universitario Gregorio Marañón in Madrid presented findings from an analysis of tumour characteristics and survival among HIV-positive patients with HCC. The researchers looked at how these have been affected by surveillance practices, comparing outcomes before and after publication of the American Association for the Study of the Liver (AASLD) HCC practice guideline in 2005.

Guidelines recommend that people at risk for HCC should undergo screening every six months. Risk factors include older age, active HBV replication or inflammatory activity, HCV infection, non-alcoholic steatosis (fatty liver) and liver cirrhosis due to any cause. Although most people develop HCC after they already have advanced fibrosis or cirrhosis, it sometimes also occurs in people with less advanced liver disease. Screening should include ultrasound imaging to detect tumours and may also include liver biopsies and measurement of alpha fetoprotein (AFP), a blood biomarker linked to HCC and other types of cancer.

Berenguer's group did a retrospective analysis of medical records from all HIV-positive patients diagnosed with HCC at their centre between October 1998 and April 2012. Surveillance was defined as having undergone liver imaging within the twelve months prior to HCC diagnosis. HCC was diagnosed using non-invasive methods or pathology and staged using the Barcelona Clinic Liver Cancer (BCLC) classification system:

Attempts at curative therapy such as resection (tumour removal) are generally recommended for BCLC stages 0 or A, palliative therapy for stages B or C and management of symptoms only for stage D.

Looking at liver disease characteristics, all patients diagnosed with HCC had HCV (77%), HBV (11%) or both (11%). Almost all (95%) had cirrhosis, 60% had a Child-Pugh score of B or C and half experienced liver decompensation. More people were treated for hepatitis C with pegylated interferon/ribavirin during the second period (32 vs 47%), but the difference did not reach statistical significance. Berenguer noted that none of the treated patients achieved sustained virological response.

Fewer than half of participants had HCC diagnosed through surveillance during either period (42% during 1998 to 2005 and 41% during 2006 to 2012), indicating no change after the AASLD guidelines were issued. Biopsy confirmation, however, was more common during the first period (37 vs 15%).

People diagnosed between 1998 and 2005 were significantly less likely to receive treatment for HCC than those diagnosed later (42 vs 71%). This included potentially curative therapies such as radiofrequency or ethanol ablation (8 vs 22%) and resection (2 vs 6%), as well as palliative therapies such as transarterial chemoembolisation (11 vs 17%) and sorafenib (2 vs 9%). Patients in the latter period were more than twice as likely to undergo multiple types of treatment (11 vs 24%).

"In people with HIV, HCC was frequently diagnosed at an advanced stage and outside of surveillance programs," the researchers concluded. "Mortality was very high, with no significant changes in recent years."

Berenguer stated that "probably all patients with cirrhosis" are at risk of developing liver cancer, and further studies are needed to see if some people are especially at risk. He recommended screening HIV-positive people with advanced liver disease at least every six months.