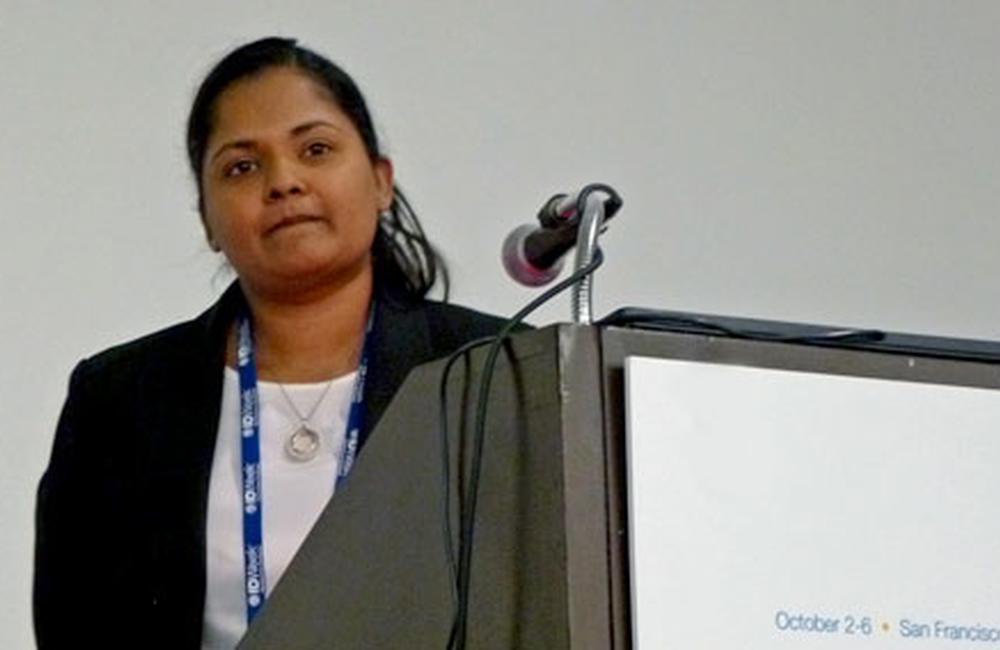 Kamla Sanasi, from the University of South Carolina, speaking at the ID Week Conference.
This article is more than 9 years old. Click here for more recent articles on this topic

People with HIV who have their viral load and CD4 cell count monitored every six months were no more likely to experience virological failure or to change their antiretroviral regimens than those monitored every four months, researchers reported at the IDWeek 2013 meeting last week in San Francisco.

European and US HIV treatment guidelines have traditionally recommended that people receiving antiretroviral therapy (ART) should have their viral load and CD4 count monitored as often as every three months. Current guidelines note that less frequent monitoring may be adequate for patients who are doing well, but this has not been extensively studied in wealthy countries.

Kamla Sanasi from the University of South Carolina and colleagues designed a study to compare outcomes amongst people with HIV on stable ART who were randomly assigned to undergo laboratory monitoring every four or every six months.

Less frequent monitoring could reduce cost and improve quality of life by requiring fewer medical appointments but, conversely, adherence could decline and virological failure or toxicities could continue longer before they are detected, the researchers noted as background.

This analysis included 165 people with HIV seen at a single clinic in the US south who had CD4 counts of at least 250 cells/mm3 and were on combination ART with an undetectable viral load (<200 copies/ml) for at least one year. All patients who met these criteria were included, not only those who were expected to do well with less frequent monitoring.

Most participants (about 70%) were men, nearly 60% were black, 38% were white, the average age was 47 years, and they had been HIV positive for an average of 12 years. Nearly half were taking non-nucleoside reverse transcriptase inhibitors (NNRTIs) and one-third were taking protease inhibitors. The mean baseline CD4 count was approximately 575 cells/mm3, with a nadir (lowest-ever) of 244 cells/mm3. One-quarter had two or more co-morbid conditions, including 15% with hepatitis B and 17% with hepatitis C.

At each scheduled visit, participants completed an adherence survey, a quality-of-life questionnaire that included physical and mental health components, and a questionnaire about other medical care they received. Follow-up continued for an average of 20 months.

The primary study endpoint was percentage of participants with virological failure at two years, defined as two consecutive detectable viral loads. Other outcomes included self-reported adherence, quality of life, number of healthcare visits, emergence of new viral resistance mutations, and percentage of people who needed to change or stop ART.

There were no significant differences in the proportion of participants with virological failure, nor in time-to-virological-failure in the four-month and six-month monitoring groups. In fact, only a single participant in the six-month group experienced sustained HIV rebound.

Participants also reported no difference in adherence in the six-month and four-month monitoring groups (adherence scores of 12 vs 13). Again, adherence did not change significantly from baseline in either group.

Only a small proportion of participants changed or stopped ART, with no significant differences between the four-month and six-month groups. Two people switched regimens due to viral breakthrough, one due to poor adherence and twelve for other reasons; none changed to due side-effects. One person in each group acquired a new resistance mutation.

Interestingly, participants randomised to monitoring every four months actually had 23% more HIV-related medical visits overall, a significant difference. The 16% increase in non-HIV-related visits did not reach statistical significance, however, leading the researchers to surmise that, "Patients with longer intervals between HIV visits did not compensate with more visits to other providers."

These findings have potential implications for healthcare policies and resource utilisation, the study team concluded. At their clinic, which sees about 2000 patients, reducing monitoring for stable individuals from three to two visits per year would save more than USD$787,000 annually. These funds could be redirected to HIV screening, linkage to care, adherence counselling and other social issues, they suggested.

On a national level in the US, a recent study by Emily Hyle and colleagues found that reducing CD4 cell monitoring for stable patients from every six months to once a year could save USD$10.2 million annually, or more than USD$225 million over a lifetime.

After the presentation Paul Volberding from the University of California in San Francisco noted that some experts are talking about not monitoring CD4 counts at all in stable patients, just viral load. This approach has been studied with good results in resource-limited settings where regular CD4 monitoring is not logistically feasible. More recently, a US study found that there was a 99% probability that people with viral load suppression and a CD4 count above 300 cells/mm3 would maintain a CD4 level well above the danger zone for opportunistic infections over five years.

Among women with HIV treated with antiretrovirals, greater cumulative viremia increased the risk of multimorbidity and of developing each of five specific non-AIDS comorbidities.
Healio
24 Jan 23
HIV testing policies & guidelines

UK: Government must make every contact count in emergency departments

In an open letter launched today, we're asking that the Government’s successful opt-out testing programme is extended to all areas with a high prevalence of HIV – from Birmingham to Portsmouth, and Derby to Peterborough.
Terrence Higgins Trust
19 Jan 23
HIV testing policies & guidelines