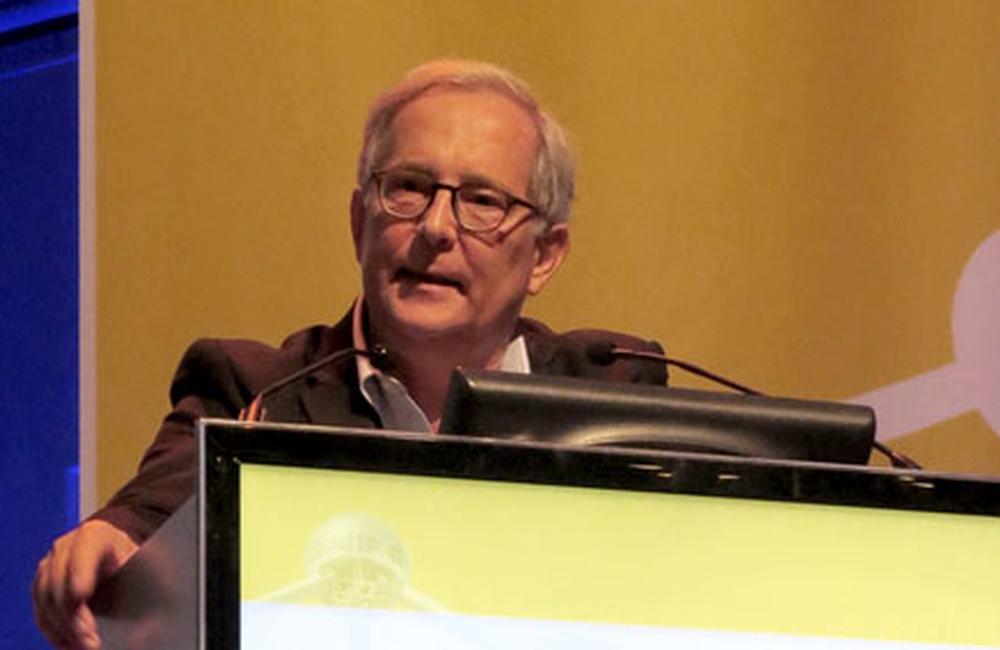 Francois Raffi, of Centre Hospitalier Universitaire in Nantes, speaking at EACS 2013. Photo by Liz Highleyman, hivandhepatitis.com
This article is more than 9 years old. Click here for more recent articles on this topic

HIV treatment in the coming years will include novel antiretroviral agents and new formulations such as long-acting injectables, as well as new strategies aimed at improving adherence and minimising side-effects, it was reported last week at the 14th European AIDS Conference in Brussels.

In his closing lecture on Saturday, Francois Raffi of Centre Hospitalier Universitaire in Nantes offered an overview of the future of HIV drug development. A remarkable 28 drugs have been produced in the past 26 years, he noted, but about half of them are no longer used as safer and more potent alternatives have come along.

"I think everyone will agree with me that there's little unmet need regarding efficacy," he said, but there's "still room for improvement" with regard to convenience, tolerability and long-term toxicities.

Raffi described some of the antiretrovirals currently in development, noting that it is not yet known what role they will play in clinical practice.

Beginning with nucleoside/nucleotide reverse transcriptase inhibitors (NRTIs), two new pro-drugs of tenofovir are being evaluated, tenofovir alafenamide (TAF) and CMX157. Tenofovir, a component of widely used co-formulations including Truvada, Eviplera and Atripla, is highly effective but can cause kidney and bone toxicity. TAF – now in phase 3 testing – produces higher drug levels in cells but allows for lower dosing with less effect on the kidneys and bones.

CMX157 also carries less risk of kidney toxicity and its long half-life in a phase 1 trial suggests once-weekly dosing may be possible.

Similarly, BMS-986001 is a new analogue of d4T (stavudine, Zerit). This drug is no longer used due to toxicities, with the exception of in some resource-limited settings, where it is a cheap option. BMS-986001 – now in phase 2b development – causes less mitochondrial toxicity, according to early studies.

Another NRTI in the pipeline, EFdA, is "the most potent antiretroviral reported to date" in laboratory studies, Raffi said. He also mentioned two other drugs in this class, elvucitabine and apricitabine, that have languished in the pipeline since the early 2000s.

Turning to non-nucleoside reverse transcriptase inhibitors (NNRTIs), MK-1439 "is the most promising candidate," according to Raffi. MK-1493 has several attractive properties, including activity against HIV that has developed resistance to older NNRTIs, and it has demonstrated good antiviral activity and tolerability in a phase 1b monotherapy study. Another novel NNRTI, AIC292, has also shown good activity against drug-resistant HIV.

Researchers are working on a new type of non-catalytic site integrase inhibitors, also known as lens epithelium-derived growth factor inhibitors or LEDGINs, that interfere with a protein (LEDGF/p75) that HIV uses to integrate its genetic material into host cell chromosomes.

Leaving the currently approved antiretroviral classes, Raffi reviewed some agents now in development that target other steps of the viral lifecycle. Cenicriviroc works as a CCR5 entry inhibitor (like maraviroc, Celsentri) but also blocks the CCR2 receptor. Data presented at this meeting demonstrated good antiviral activity and tolerability in a phase 2 clinical trial.

BMS-663068 interacts with HIV's gp120 envelope protein and interferes with binding to CD4 cells. Its mechanism of action resembles that of enfuvirtide (T-20, Fuzeon) but it is an oral pill rather than a daily injection.

While daily injections are clearly problematic, many people would be willing to take a single monthly or quarterly shot for HIV maintenance therapy or perhaps for pre-exposure prophylaxis (PrEP). Two such injectables are proceeding through the development pipeline: TMC278-LA, a long-acting form of rilpivirine (Edurant), and GSK1265744, a new integrase inhibitor that is also being tested as an oral medication.

In the near future, Raffi predicted, we will see more fixed-dose combinations and single-tablet regimens, including the first co-formulations containing HIV protease inhibitors and the first to incorporate abacavir/3TC (rather than tenofovir/emtricitabine) as the NRTI components.

As new drugs and co-formulations come online, "selecting the best combination will remain a challenge," Raffi acknowledged. Nearly 20 years after the advent of combination highly active antiretroviral therapy in the mid-1990s, the standard of care is still three-drug regimens, usually containing two NRTIs plus a third drug from another class, most often a NNRTI or protease inhibitor.

Several NRTI-sparing regimens have been studied in an attempt to simplify therapy, reduce toxicities or overcome resistance. To date "none have resulted in better efficacy and safety" than standard therapy for first-line treatment, according to Raffi. However, the GARDEL study, presented at this meeting, showed that a simplified regimen of lopinavir/ritonavir (Kaletra) plus 3TC (lamivudine, Epivir) works as well as standard therapy.

Ongoing studies are looking at NRTI-sparing combinations consisting of an integrase inhibitor with a NNRTI or CCR5 blocker. Integrase inhibitors are good candidates for novel strategies as they are among the best-tolerated antiretrovirals.

Raffi proposed that a cenicriviroc/3TC co-formulation plus a third drug may be a future first-line alternative to combinations with two NRTIs. Long-acting agents – for example, a once-weekly single-tablet regimen – may also play a role.

Raffi suggested that the widely used efavirenz (Sustiva) may not deserve to be considered a preferred agent any more as newer drugs are equally or more potent and it commonly causes central nervous system side-effects.

"My personal view is we might now consider a change of [initial] antiretroviral strategy," Raffi said. "Integrase inhibitors will probably become the new cornerstone of first-line therapy", as their potency and tolerability is better than other classes.

He added that persistent immune activation and inflammation in people with HIV should also be considered, which might lead to using raltegravir (Isentress), cenicriviroc or other agents that may have anti-inflammatory as well as antiretroviral properties. Whether a drug is able to penetrate hard-to-reach areas such as the brain, genital tract, and gut lymphoid tissue is also an important characteristic.

But for the time being, Raffi said, "the major unmet need is getting treatment to all in need." By now the idea of the 'treatment cascade' is well-known, in which people with HIV are lost at every step from test, to linkage to care, to starting ART, to achieving viral suppression. Research in the US, Africa and now in Europe indicates that only about 20 to 25% of HIV-positive people are on treatment with undetectable viral load.

"Our thoughts should focus on the 20 to 40% of individuals living with HIV who are undiagnosed, and on improving treatment for those who are diagnosed," Raffi concluded. "We are all excited by a cure, but a cure is not for tomorrow. Universal access – getting ART to all – is the first step. We need to use all these new tools and drugs not just for a few patients, but for all patients."