Experts debate whether HIV cure is 'hype or hope' 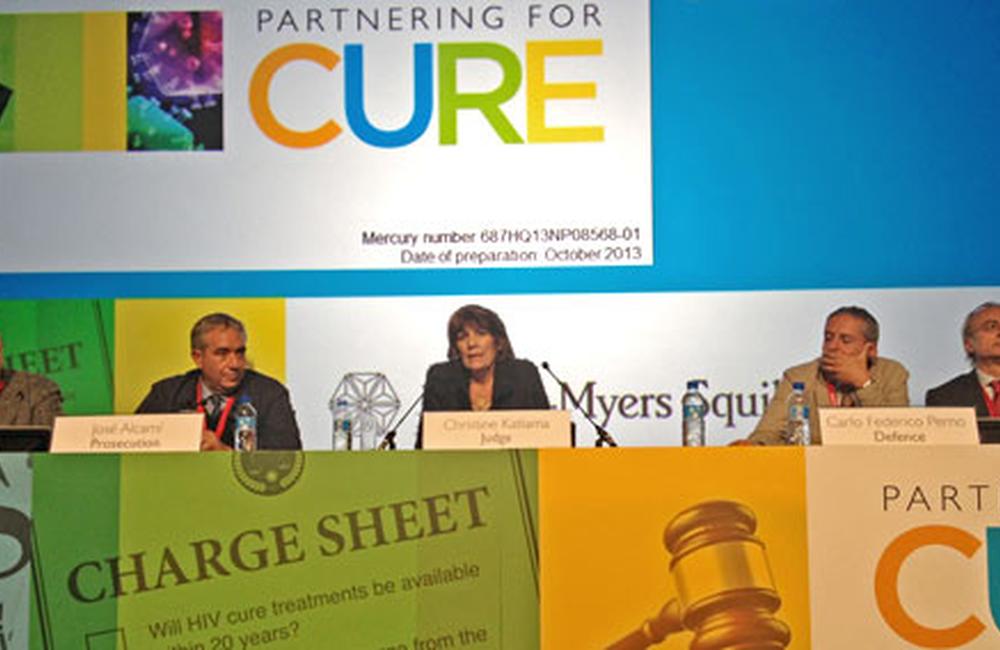 The panel at the mock trial at EACS 2013. Photo © Liz Highleyman / hivandhepatitis.com.
This article is more than 8 years old. Click here for more recent articles on this topic

Is a functional cure for HIV feasible within the foreseeable future or is it a hopeless quest robbing resources from more practical approaches to improve the lives of people living with HIV? This question was the crux of a mock trial held yesterday on the opening day of the 14th European AIDS Conference in Brussels.

The debate was part of a satellite session sponsored by Bristol-Myers Squibb (BMS) to mark the launch of its new Partnering for Cure initiative, which will support education and research into novel treatment and cure strategies for chronic viral diseases including HIV and hepatitis B and C.

Christine Katlama of Pierre and Marie Curie University in Paris, playing the 'judge', noted the recent increase in attention to the possibility of an HIV cure at scientific meetings and in the popular media, spurred in part by 'proof-of-concept' cases like that of Timothy Ray Brown (the 'Berlin patient') and that of the Mississippi baby.

Speaking in defence of the proposition that an HIV cure is possible, Carlo Federico Perno of the University of Rome gave the example of hepatitis C as a virus that can be eradicated.

Whilst traditional interferon-based therapy relied on stimulating the immune response, new direct-acting agents work by interfering with various steps of the hepatitis C virus (HCV) lifecycle, much like combination antiretroviral therapy (ART) for HIV. Two highly effective and well-tolerated compounds – Janssen's simeprevir and Gilead Sciences' sofosbuvir – are scheduled for US approval by the end of the year (assuming the federal government shutdown does not disrupt the work of the Food and Drug Administration).

The inclusion of this argument was no doubt intended as an opportunity to educate about hepatitis C, which is increasingly making its way into HIV conferences. Many people with HIV have hepatitis C co-infection, and HIV clinicians are increasingly called upon to treat it. BMS has some promising hepatitis C direct-acting agents in the pipeline including the NS5A inhibitor daclatasvir, the HCV protease inhibitor asunaprevir and the non-nucleoside polymerase inhibitor BMS-791325.

But no one, including Perno, really thinks hepatitis is a good model for an HIV cure.

HCV remains confined to a cell's cytoplasm, where it must either "replicate or die", Perno explained. If it does not do so immediately, HCV RNA is rapidly degraded; drugs that fully halt replication can therefore offer a permanent cure. Perhaps the main scientific barrier to hepatitis C treatment is that the virus is highly variable – much more so than HIV – which means different drugs work best against different HCV genotypes and combination therapy is needed to prevent resistance.

HIV, in contrast, enters host cell chromosomes where it may remain latent for decades and perhaps even a lifetime. Speaking for the 'prosecution', José Alcamí of the European University of Madrid said that viral latency, existence of viral reservoirs and destruction of the immune system by the virus are the three main barriers to a cure.

HIV DNA in resting CD4 T-cells can awaken when these cells become activated as part of an immune response, leading to renewed viral replication, he explained. For this reason people with HIV must remain on ART – as far as we know for life – to guard against viral rebound.

HIV cure researchers are testing several different strategies to reverse latency and flush the virus out of hiding. The so-called 'shock and kill' approach involves using agents such as HDAC inhibitors to awaken latent virus coupled with immune-boosting therapies to kill infected cells. But current anti-latency drugs trigger only weak viral reactivation and target only a small proportion of the viral reservoir.

"I would like to give good news, but we face a virus we are not able to cure with drugs we have available or even drugs we may have in the future," he concluded. "The destruction of the immune system remains a barrier to a cure."

Returning to the 'defence', Giuseppe Pantaleo of Centre Hospitalier Universitaire Vaudois in Lausanne countered that we should not feel too depressed as "there is a lot to be optimistic about."

Pantaleo outlined the important proof-of-concept cases, previously reported on aidsmap.com, that indicate that a cure is possible at least in principle. These include the Berlin patient who was cured after a bone marrow stem cell transplant for leukaemia, an American baby who shows no evidence of remaining virus after starting ART within a day after birth; two Boston stem cell transplant patients with sustained viral suppression after antiretroviral interruption; and the French VISCONTI cohort of individuals who appear HIV-free after ART initiation during acute infection.

Pantaleo argued that continuing residual viral replication despite ART is "probably responsible" for replenishment of latent reservoirs and better antiretroviral drugs that fully suppress replication may offer hope for a functional cure. Data on this point are mixed, however, and some researchers think that at least current classes of antiretrovirals already provide maximum suppression.

Summing up, Pantaleo noted that only 25% of people with HIV in the US have achieved undetectable viral load on ART and that even excellent current therapy remains "very hard to take" especially over the long term.

A combination of strategies will be the secret of an HIV cure, he concluded. "We're just at the beginning," he said. "A functional cure is possible if there is the right investment in these new approaches."

Perno added that there is "clear evidence that persistent virus is harmful." Even if 'undetectable', the virus is not absent in the body and even a few copies may be detrimental, for example by maintaining a state of persistent immune activation. "In the long term we will pay a price or this," he cautioned.

But the effectiveness of modern antiretroviral treatment was the gist of Georg Behrens argument against pursuing a cure. Behrens, of Hannover Medical School, explained that current ART is so good that attempts to cure HIV are not worth the risk. Donor stem cell transplants, for example, can be fatal and are only appropriate for people with life-threatening conditions such as leukaemia or lymphoma.

Furthermore, better antiretrovirals are in the works including agents that target HIV attachment and maturation, the "very ends of the replication cycle." Treatment dramatically extends survival of people with HIV and the relatively small percentage who do not do well on current ART – due to co-morbidities or adherence problems, for example – are "not the best candidates" for risky cure approaches.

Behrens concluded that research should focus on improving ART for the broad population of people with HIV, not on curing a few exceptional patients. "We should ask not only is a cure possible, but what is the real benefit for patients," he said. "We may be able to fly to the moon, but that doesn't solve our problems with traffic here [on earth]."

After hearing the arguments on both sides the audience 'jury' rendered its verdict. Among the more than 100 participants, opinion was nearly evenly divided as to whether a cure for HIV is an achievable and worthwhile goal.